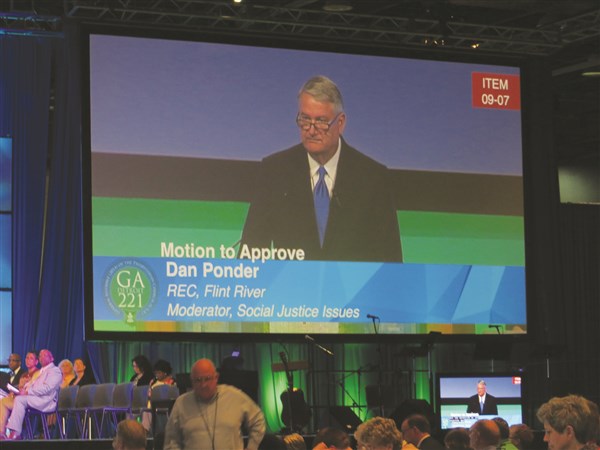 The Presbyterian Church (USA) holds a worldwide conference every two years.  I was honored to be chosen to represent the Flint River Presbytery in the 221st General Assembly held in Detroit this month.  The experiences and blessings were so far reaching for me that I know I can’t possibly convey everything I experienced in those eight days.
Romans 15:13 is a wonderful prayer that Paul wants every believer to experience: “Now may the God of hope fill you with all joy and peace in believing, so that you will abound in hope by the power of the Holy Spirit.”  The theme of the meeting was “Abounding in Hope”
The Presbyterian Church government functions much like the U.S. government.  The members are elected by local groups of churches known as Presbyteries.  I represented the Flint River Presbytery which encompasses a territory from Columbus to Macon to Valdosta to Donalsonville, or basically the entire Southwest portion of the state of Georgia.
Prior to the gathering, I was asked to moderate the Social Justice Issues Committee.  This committee had 68 members and had a variety of issues to discuss and debate, including abortion, end of life issues, gun control, death penalty, drug sentences, trauma crisis counseling, voter suppression, parental leave, and tax policy.  This is in addition to reports from committees representing racial and ethnic concerns and women’s issues.
It doesn’t sound like your typical Sunday morning service, does it?  The reality of most large mainline denominations is that their work extends around the world.  The Presbyterian Mission Agency is involved in all sorts of work in virtually every corner of the planet.
I flew to Detroit somewhat apprehensive.  Could I truly moderate a committee debating such an assortment of controversial issues?  Would the presence of the press, lobbyists, and advocates cause me to make incorrect rulings of procedure that might affect the outcome of the debates?
I long have believed that God puts us in places for a reason.  I also believe He does not give us challenges that we can’t meet, especially when we are genuinely seeking to discern His will.  Another way of putting it, is that I sincerely prayed that I wouldn’t screw something up.
My prayers were answered, but not necessarily in the way that I asked.  The committee’s work was completed in a timely fashion, and every action was ultimately passed by the General Assembly.
Everything wasn’t unanimous, but everything was fairly debated.
But the real story, at least for me, was much bigger.  I saw a large group of people seriously debate and consider items that brought many to tears.  Passion ran high and tempers occasionally flared, but a civility and concern emerged within the group.
There is something breathtaking about watching the Holy Spirit descend on a group of a thousand people.  The commissioners reflected the church as a whole, in that we were young and old, male and female, black, white and a half dozen other colors.  Different languages, cultures, and political leanings were evident at every turn.
Prayer, song, worship, and a serious effort to listen for God’s voice helped the group become one.  On difficult issues, the two sides prayed for each other.  There was a certain rawness as people exposed their most inner beliefs, filtered by their own life experiences.
I left Detroit, exhausted both physically and emotionally.  Arriving in Detroit already aware of the many challenges facing the church, I left realizing how many more challenges we face than I ever imagined.
It would be easy to despair in the face of the role of the church in a world changing faster than at any time in history.  But I left not disheartened, but encouraged.
I was asked to moderate a group of people tackling difficult issues.  I left seeing that only God can make such a situation work, and only when people collectively and genuinely seek His will.
How I wish this same experience could be evident in our national and state government deliberations.  Compromise isn’t a dirty word when your primary focus is not on winning, but on doing the right thing.
I will spend a while trying to understand what all I just experienced.  However, I already know that God is very much alive, even in terribly difficult decisions.  I give thanks that today, more than ever, I am indeed “Abounding in Hope”.
Dan Ponder can be reached at
dan@ponderenterprises.net