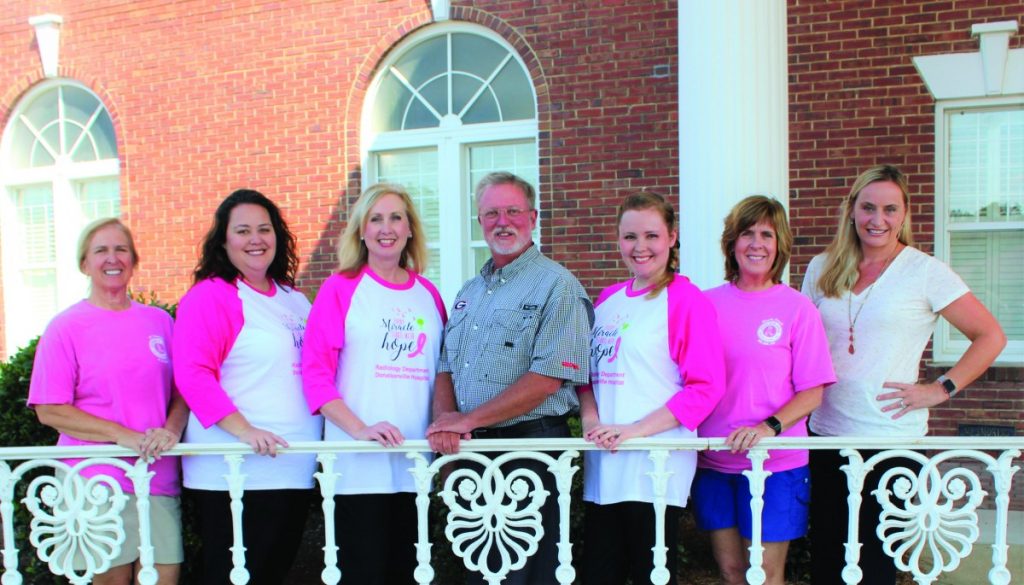 Joyce’s Jog will be held on October 20th here in Donalsonville. Sign-up for Joyce’s Jog at joycesjog.com. If you would like to make a donation in support of the 3D Mammography project at Donalsonville Hospital please contact Erin Lenz at 229-524-5217

Joyce’s Jog and Donalsonville Hospital have teamed up to make a big difference in our community in the fight to recognize, diagnose and treat breast cancer. Since 2007 Joyce’s Jog has held their annual 5K and 1-Mile fun run in honor of Joyce Payne Henley and donated proceeds to the Central Georgia Susan G. Koman Society. This year, in an effort to keep the dollars local and benefit our local community, the money raised from the annual event will support Donalsonville Hospital’s procurement of a state of the art 3D Mammography unit.

Steffey Vines of Joyce’s Jog said, “We are thrilled to know the monies raised through this beloved event will directly impact the women in our community for the better.” Over the last decade, Joyce’s Jog has raised thousands and seen more than 1,000 people participate. It has become a staple of the annual Harvest Festival and welcomes runners and walkers of all ages, abilities and communities.

Donalsonville Hospital had set its sights on acquiring this new technology during its centennial year and having Joyce’s Jog help support the effort makes the project even more important. “We are constantly looking on the horizon for what hospital services our patients need to live healthy, happy lives,” said Chuck Orrick, Hospital Administrator. “3D mammography allows for earlier detection, less false positives and more peace of mind for our patients.”

According to the Georgia Breast Cancer Coalition, in our state, it is estimated that more than 8,000 women will be diagnosed with breast cancer and more than 1,200 will die from the disease this year. A woman in the U.S. has a one in eight chance of developing invasive breast cancer during her lifetime.

Donalsonville Hospital does more than 1,000 traditional mammography studies annually. One of Donalsonville Hospital’s priorities is to improve access to up-to-date healthcare advances to our rural community.  The hospital strives to offer the same services to patients as hospitals in bigger cities with more financial resources.

Using traditional mammograph, many women undergoing breast screening are asked to return for additional tests because of a suspicious density that appears in their scans. Such anxious moments can now often be avoided, thanks to FDA-approved 3D mammography (breast tomosynthesis).

The technology uses multiple angled images as the machine sweeps in an arc over a woman’s breast. The radiologist views these images sequentially and is able have more accurate detection by minimizing the impact of overlapping breast tissue. In short, 3D mammography technology can make a tumor easier to see, provide earlier diagnoses and help reduce false alarms.

Breast cancer is the second leading cause of cancer deaths among women, exceeded only by lung cancer, according to the American Cancer Society. Detecting cancer at an earlier stage will influence a woman’s chance of survival.