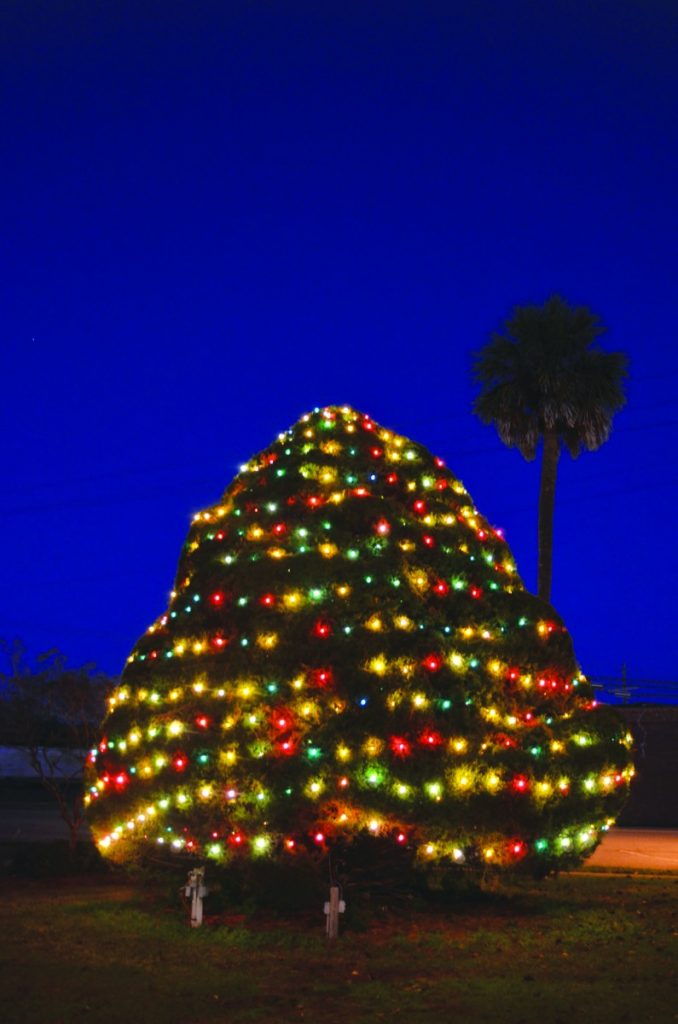 For three decades the Leyland Cypress tree that stood in the Wiley Avenue park in downtown Donalsonville represented a special fund raising project of the American Cancer Society and the Seminole County Warpath on Cancer organization – until last week. The tree sustained extensive damage in October from Hurricane Michael and sadly, the decision was made to remove it this past week.

The “Love Lights a Tree” project began in Seminole County in 1987. Edsel Bryan, president of the local ACS at that time, named Sheryl Cannington, Eddie Newberry and Lucy Thomas as a committee to promote this fund raising project in the month of December.

For the first year, a tree was chosen from trees grown by Cecil Lunsford. The tree was placed in the ground and watered to keep it green. The project was so successful that a permanent tree was purchased from Buds & Blossoms nursery. Carlton Thomas and Luther Hastey planted this tree and cared for it through the early years.

“The lighting of this tree ‘in honor or in memory’ of this community’s loved ones and friends has been a featured introduction of the Christmas season for the past 31 years,” commented Lucy Thomas. The late Bert Thomas and Willie Williams, with their expertise and equipment, trimmed and placed the lights on the tree each year for most of that time span.

This past December because of the damage caused to the tree in October from Hurricane Michael, Trent Harrison, Mark Whittaker and the Three Notch EMC crew designed and constructed a lighted cross for the 2018 celebration, which was provided for a very effective and emotional ceremony. The lighted cross, as did the lighted tree before, stood in honor and memory of local citizens in whose name, any thousands of dollars have been donated for the fight against cancer and the treatment and research of this disease.

Seminole County Warpath on Cancer was established to ensure donations given to this organization will remain here and be used for Seminole County patients.

Even with the removal of the iconic tree the light of hope has not been dimmed in Donalsonville and Seminole County. And, who knows a new tree may some day be planted for future generations to enjoy.