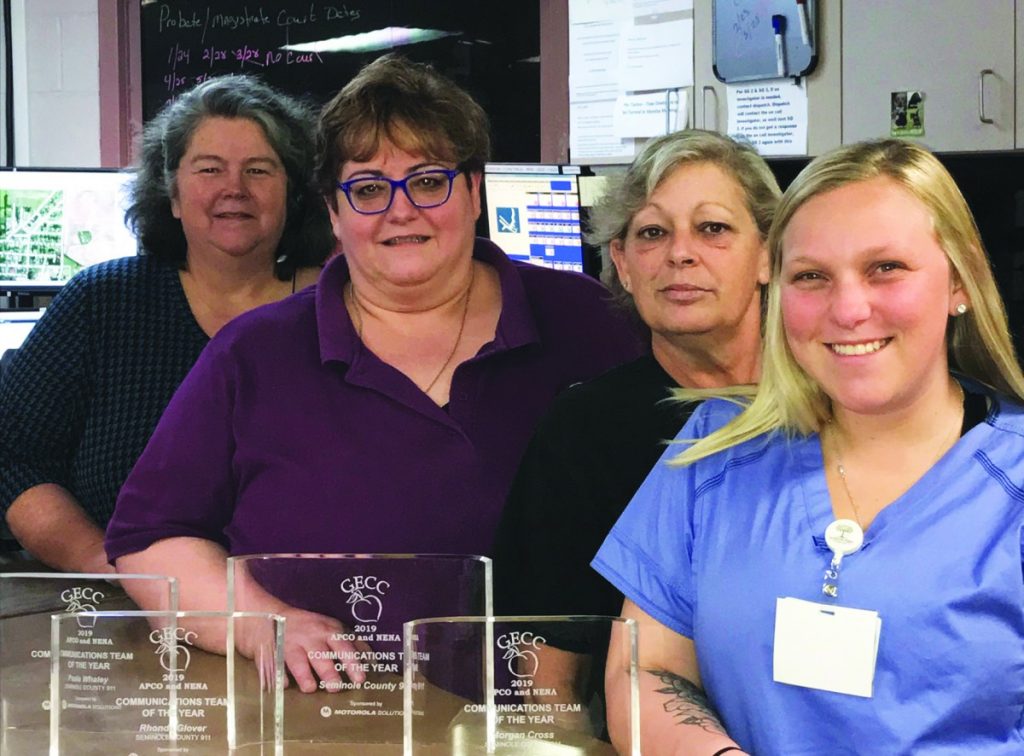 Seminole County’s E-911 Coordinator Paula Whaley recently attended the 10th annual Georgia Emergency Communications Conference (GECC) in Columbus.  With Seminole County Sheriff Heath Elliott in the audience, Coordinator Whaley accepted the award for 2019 Georgia Emergency Communications Team of the Year.  The 911 Team consisted of Pam Helms, Rhonda Glover, Morgan Cross and Coordinator Whaley.   This award is presented annually to a group of two or more communications officers for their exemplary handling of a specific 9-1-1 emergency or other situation that involves the coordinator of multiple public safety resources.  Seminole County’s E-911 staff were nominated by both Sheriff Elliott and CPL Jim Shingler for their hard work during and after Hurricane Michael.

Their nomination cited the following:  Being short staffed in 911 is a nationwide problem.  Being short staffed during a natural disaster such as Hurricane Michael is even a bigger problem.  However, Seminole County overcame any staffing hardships and its four dispatchers worked tirelessly around the clock from the beginning of to the end of the storm.  These women handled hundreds of calls and were the calm to many people’s storm.

From that initial call until midnight October 11th (36 hours) this team of communications officers received 235 calls to 911, answered or made 687 admin calls, and created 315 CAD cards.  As a comparison, during 2017, the daily average was 17 calls to 911 with 33 CAD cards being created.  The 911 phones went down around noon on the 11th, and 911 calls were then routed to the Sheriff’s Office admin lines where they could be answered locally.  When the admin lines began failing as well, the 911 calls were then routed to a neighboring county.  At that time, this team began using their personal cell phones when needed.

They received numerous calls for help but were only able to try to reassure the callers that someone would respond as soon as it was safe to do so.  The most difficult call received reported the death of a young girl.  It would take six and a half hours for responding officers to reach the residence.  Whaley commented, “I was personally in the dispatch room when the call came in and I saw the toll it took on all of them.”  To make matters worse, our repeater was also knocked out during the storm, making their jobs even harder.

The team worked around the clock for several days, converting an interview room into a make shift bedroom, taking turns for a quick break and then returning to the dispatch room to continue processing calls.  I could go on and on about the awesome job these four did and the professionalism exemplified during such a tragic time.

Whaley adds that she was honored to accept the award on behalf of Seminole County E-911.  She is proud to work with great staff of 911 Communications Officers.  She states that they work hard year-round, but during Hurricane Michael and the days that followed, her team was beyond awesome.  Decatur-Grady 911 was selected as the 2019 Center of the Year for their hard work during Hurricane Michael also.

Coordinator Whaley tries to attend the GECC training each year.  She credits being in a class in 2017 titled Lessons Learned during Hurricane Matthew that helped her prepare our local 911 center for Hurricane Michael.  That session was taught by Director Steve Usher of Glynn – Brunswick 911 and the late Tom Wahl, Director of Liberty County 911 whom talked about their centers’ responses to Hurricane Matthew the previous year.

Coordinator Paula Whaley also received the 2019 Tom Wahl Legacy Award for her continuous commitment, professionalism and dedication to the mission of emergency communications.  The recipient of this award is chosen by the executive board of the Georgia Chapters of APCO and NENA.  Whaley states that she was truly humbled to selected by her 911 peers across the state to be honored.

Paula Whaley is a member of APCO, NENA, and the Georgia 911 Director’s Association.  She has served as the Southwest Regional Director for Georgia NENA since 2015, and serves on the GECC training committee.  Representing a small 911 center, Whaley has recently been selected to serve on special Task Force created by the Georgia Emergency Communications Authority regarding Telephone CPR training. At the 2018 APCO / NENA fall training retreat, she was appointed by NENA to assist with the Georgia Telecommunications Emergency Response Team (TERT).  However, before beginning those duties, a TERT team was deployed to South Carolina after Hurricane Florence and a team from Lowndes was deployed to Seminole County 911 after Hurricane Michael.  Whaley is also a member of the Georgia Association of Women in Public Safety, Georgia Records Association and the Georgia Association of Terminal Agency Coordinators where she previously served as the Southwest Regional Vice President.

Whaley adds that she would like to thank Sheriff Elliott for his support in allowing her serve not only the citizens of Seminole County, but also those across the state.