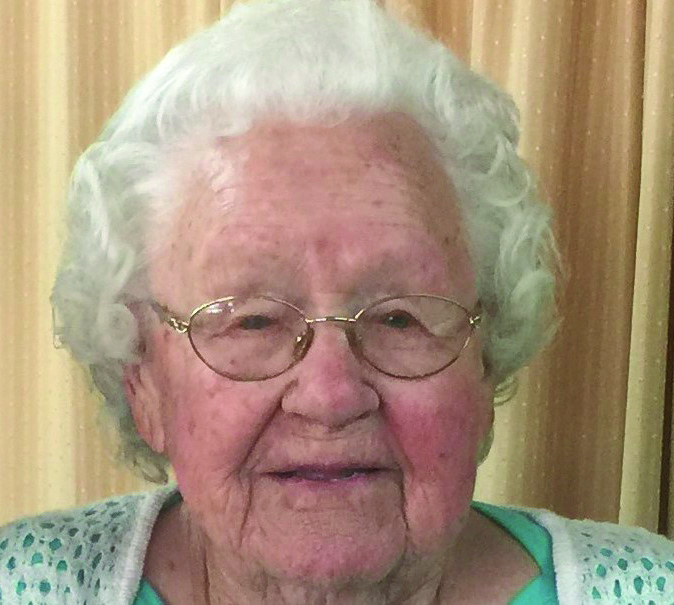 If you know Theda Layton, please join in the celebration of her 100th birthday.  The party will be Saturday, April 6 at 1 p.m. in the Fellowship Hall of the First Baptist Church in Pelham.

Please come, and no gifts please, just your presence.

Also, it would be great for her to receive 100 birthday cards this year.

Born April 7, 1919, Theda Ford was the baby of nine children.  She has only a vague memory of her mother. When Theda was about the age of three, she stood beside her mother’s sick bed and remembers her mother patting the top of her head. Her father left the family and moved to Florida.  Theda was reared by her siblings in a loving home on the farm in Seminole County, Georgia near Donalsonville, where they worked together to make ends meet.

She worked on the farm each morning before school and after.  She planted corn; the planter was pulled by a mule.  She milked the cows.  She did any chore inside or out that her siblings asked of her.

She lived in the Pineview Community, which was about half way between Donalsonville and Jakin.  She walked to the one room school house.

She quit school at the age of 14 to stay home all day to work on the farm.  She was a good cotton picker.  She longed to be better.  Her goal was to pick 100 pounds a day, like some of the older pickers.  She was never able to meet that goal.

A little older, she remembers going to Dothan to get her first permanent wave.  Her brother, Doc, said he would take her on his motorcycle.  She was so pleased with her beautiful hairdo. When it was time to return home she put on the leather motorcycle helmet and rode back to the farm.  All was well until she got home and pulled the helmet off and saw her hair.

She was at a church singing one weekend when she met a boy, George Odom.  He wanted to go with her but she told him he would have to wait.  She was only 14.  Her sisters would never let her have a date so young.  So two years later, George asked her out for their first date. She told him, “No, you don’t even have a car!” He said yes he did, so they went to town to the late movie.

When her friend had earlier taught her to drive, it was on a model A Ford.  It had a crank on the outside in the front.  She said her friend had to get in and out, in and out, turning that crank before she could finally get the hang of using the clutch and get the car going.  She has driven many a vehicle since that time.

Theda and George were 16 when they married. They lived with her brother and sister-in-law and worked the farm.  They later were able to buy the few acres and rental house they were living in.

The Odoms continued to work their farm as a family of three.  When their son, Raymond was in high school, Theda took a job driving the school bus.  She decided since she had to drive to school each day anyway, she should just pick up where she left off with her education.  She finished up and graduated high school while Raymond was still attending. Throughout the years, she has returned to many high school reunions with her graduating class of 1950. She was 31.

George was progressive and bought one of the first tractors in Seminole County.  The salesman had said the tractor plowed so straight it could drive itself.  She and George decided to try that to see if it was so.  She would start the tractor down the field row and jump off and George would hop on at the end of the row, turn the tractor around to start the next row and jump off as it plowed toward Theda at the other end. They made a good team. They had a good life and built a nice brick house together. George increased his acreage and bought a farm in Iron City.  They enjoyed their life, fishing and bird hunting and entertaining their three grandchildren- Anita, Keith and Celia Odom. George began to suffer from heart disease and died of a massive heart attack at home one afternoon.  He was in his mid 40s. They had been married 30 years.

Theda carried on. By that time she was a type setter at the Donalsonville News with Mr. Bo McLeod.  She stayed busy with friends, church, the grandchildren and enjoyed playing the piano and guitar.  She joined a square dance club in Donalsonville.  They enjoyed their dances and sometimes got together with other square dance clubs in the area.  She met Hill Nazworth from Pelham.  They had great fun together and enjoyed many of the same things.  They decided to marry and Theda moved to Pelham.  In Pelham, she was a bookkeeper, worked in inventory and many other jobs for Hand Trading Company, a very large retail/wholesale department store in downtown Pelham.  Theda joined the Baptist church and became a part of the community.  She and Hill both loved fishing and were able to purchase a lot on Lake Seminole and build their lake house.  They didn’t much care for each other’s secret fishing holes, so she had her fishing boat and he had his.  They would get to the lake every weekend that they could to entertain many friends and family with fish fries, card games, and a little guitar and fiddle music.

Theda took up a new job in Pelham.  She became the Director of the Pelham Senior Center which was housed in a small rental space in downtown Pelham.  Theda loved working with older folks.  She wrote grants, pressed local politicians, and pushed for a new center to be built.  She was successful and the nice, new, large facility was opened in 1992. The program there was a huge success.  There was a healthy affordable lunch served five days a week for seniors.  Theda had all sorts of programs going on — music, dancing, a library with shared books, quilting, exercise, and informative talks with guest speakers.  She was able to secure a van and each Summer took a van full of older folks up to Winder to senior Summer camp for a week.

Theda stayed busy at the church and the senior center.  Then along came Jim Layton.  Jim adored Theda and pursued her relentlessly.  They married and she moved out to the country.  Jim convinced Theda it was time to retire, so at the age of 80 she gave up her job at the center. She and Jim enjoyed wood working in their shop and they played music together and always loved card games and gardening. Theda decided she wanted a gold fish pond in the yard, so she built it. She dug the hole, lined it with the correct plastic lining, she edged it with large rocks and added lily pads and gold fish.  The pond was a feature in her front yard.  Theda was a loyal wife as Jim became ill.  She drove him many times to the Veteran’s Hospital in Florida and cared for him until his death in 2008.

Theda moved back to the city and made her home within walking distance to her beloved Senior Center.  She was none too happy at the age of 92 or 93 when her grandchildren asked for her car keys.  Powerfully independent, her days of running to the nursing home to visit, or to the country to see a friend or church member who needed a smile and hello were limited.  So, she at least wanted a golf cart.  NO WAY – was again her answer from the grandchildren. So with the kindness of so many loyal friends and neighbors and her electric scooter, she has made do and still lives a wonderful independent life at age 100. She rarely misses a card game at night, even making her own rules and deciding it is more fun to play rummy with four jokers than two, so that is how it goes.