The massive structure going up in Bainbridge’s Commodore Industrial Park is months away from being complete, but the company that will occupy the new manufacturing plant is well on the way to hiring local motivated individuals for approximately 300 jobs in multiple departments.

Taurus Holdings Inc., and its subsidiaries including Taurus USA are relocating its North American manufacturing operation and corporate headquarters from Miami to Bainbridge and officials say that the gun manufacturer has plans to begin production by this August.

“This is a shot in the arm we can all use,” said Bainbridge-Decatur County Development Authority Executive Director Rick McCaskill.

McCaskill says that Taurus relocating to Decatur County will have a regional impact.

“They will be hiring people from all over the region. These are not just jobs for Bainbridge and Decatur County. They will have people working here from Seminole County, Grady County, Tallahassee, Dothan and all over the region. These jobs will be very appealing for people and it is going to force other employers to step it up, but that’s just part of the process,” McCaskill said.

He said he would like Seminole County residents interested in a new career to consider going to work for Taurus.

To jumpstart the hiring and recruitment process, Taurus USA hosted a two-day job fair last week at the Charles H. Kirbo Regional Center on the campus of Southern Regional Technical College in Bainbridge.

Taurus USA is coming to Decatur County with plans for expanding its engineering and production capabilities, which McCaskill says will result in even more jobs.

In addition, the development authority executive says that Taurus USA suppliers are also looking to locate near the gun manufacturer.

“Seminole County could benefit from some of the suppliers that may locate in the area. It only makes sense for suppliers to look at southwest Georgia since there is a gun manufacturer operation in Troy, Ala., Columbus and Savannah.” McCaskill said.

Another related benefit is the need for housing. McCaskill says that approximately 70 families are relocating to this area from the Miami area and there is a shortage of housing. “We really have an issue with housing for the top executives. We have folks looking to live all around in Seminole  County, Thomas County, Mitchell County, Grady County, Tallahassee, even Dothan,” he said.

Taurus USA is already operating a call center for customer service in leased quarters in Bainbridge. “They have about 30 people working here already at the call center and they will eventually move into the new facility when it is completed,” McCaskill said.

McCaskill said that companies used to look to areas like southwest Georgia to locate because of cheap labor, but he says those days are long gone.

“You can’t afford cheap labor anymore. It’s a different world now. With all of the liability, you can’t afford to have someone on a production line that can’t read a label or instructions. Cheap labor you get the bottom rung of the ladder folks and that’s not what this market needs. Companies like Koyo, BASF, Taurus, and all the big companies need employees with technical backgrounds,” McCaskill said.

McCaskill says the firm will manufacture primary hand guns at the Bainbridge plant, including its Heritage handguns (cowboy authentic) but also some rifles and shotguns under the name of Rossi, which are designed for the youth market.

McCaskill has been focused on recruiting gun manufacturers and suppliers to this region since his days with the Grady County JDA. He says that more than 15 years ago he began attending the national SHOT (Shooting, Hunting, Outdoor Trade) show in Las Vegas.

However, he admits his breakthrough with Taurus occurred when a hurricane chased Taurus executives to seek safety at Southwind Plantation in Decatur County.

“I knew they were looking to relocate, so I offered to show them a new spec building at our industrial park. They weren’t interested in it, but I got them interested in the availability of land we could offer and the room for expansion,” McCaskill said.

David Blenker, Taurus president and CEO, has said, “The decision to relocate stems from our desire to expand our facility, keeping all operations in one location.”

The 200,000 square foot facility that is under construction will feature 180,000 square feet of manufacturing space and 20,000 for administrative offices and the corporate headquarters, according to McCaskill. Ground was broken on the facility in April 2018 and McCaskill is confident the manufacturing area will be completed by this August.

The project represents a combined $22.5 million investment in infrastructure and operations, officials say.

Taurus Holdings Inc., and Taurus USA are owned by Taurus Armas, S.A., which is a publicly traded company based in Brazil. Taurus Armas manufactures a wide variety of consumer and industrial products that are distributed worldwide.

According to McCaskill, the decision to relocate Taurus USA from Miami has prompted other Brazilian companies to look at southwest Georgia. “There is a Brazilian company coming to Moultrie because Taurus has shown a light on Southwest Georgia. It’s created an interest and it legitimizes this area as a good place to do business, which isn’t something we’ve always had,” McCaskill added.

“We are going to be making guns here at the end of August and we need some good folks to come to work for Taurus. They are great folks to work with. I’d encourage anyone interested to attend this upcoming job fair,” McCaskill said.

For additional information, visit TaurusUSA.com. or send a resumes to resume@tarusholdings.net 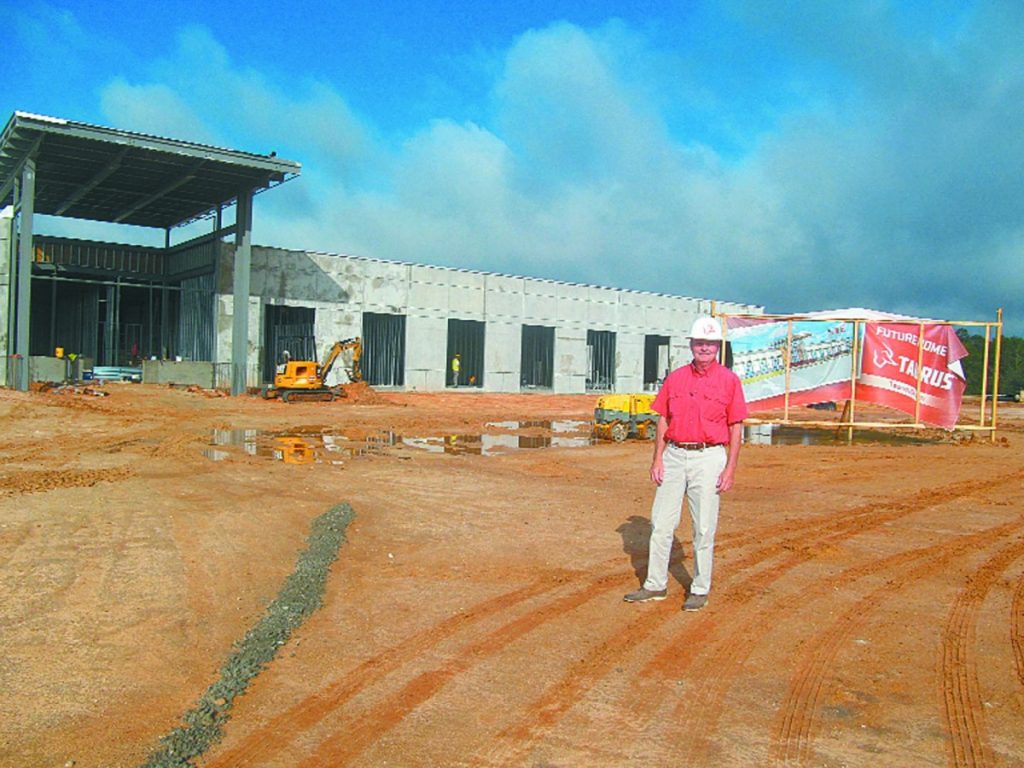