They were the tallest of the original cypress trees and once dotted the shoreline of Compass Lake.  Gradually they were lost to loggers and lightning.  By the time I was a boy all that remained were a few of their soaring trunks.  These wooden monuments were surrounded by other healthy cypress trees, which would have been considered large except when compared to the dead trunks of the original growth trees.

I am not sure when I became aware of the osprey that built the nest in one of the tallest of the dead cypress.  At some point it became part of a ritual in the Spring, to see if the osprey had returned to the nest.

It carried on to the next generation when my father would delight in taking his grandchildren to see the osprey.  The ospreys were not there every year because of the DDT that almost wiped out the birds of this family, including hawks and eagles.   Thanks to the banning of those types of pesticides the osprey survived and eventually an osprey nest returned to Compass Lake.

The tall trunks of the old, big cypress trees are all gone now.  Even cypress wood decays over time.  Yet there are still a lot of relatively big cypress trees standing in the water.  It is at the top of one of these trees that the osprey once again has a nest.

Over the past few weeks, I have taken a small boat around the lake surveying the slow progress being made as residents recover from Hurricane Michael.  Most of the docks are destroyed and as often as not I am the only boat on the lake.  It is quite a contrast to the days of dozens of ski boats and jet skis competing for space.

I hear it before I see it.   The osprey cries out a high pitched sound as I approach.  It is a warning for me not to get too close.  I see the mother in the nest, as she carefully watches me.  Over time, you will begin to see the chick as it gets old enough to peak over the edge of the nest.  For now, it is just the sound of my boat moving slowly and the osprey warning me to stay away.

Ospreys are very large hawks.  They are smaller than a bald eagle, but larger than a red-tailed hawk.   They almost exclusively eat fish so they are almost always found around water.  They can travel up to 12 miles in search of food.

Their nests are very conspicuous.  They are usually made of sticks and are often found on utility poles or channel markers.  As is the case at Compass Lake, they also like to build their nests at the top of dead trees, often over water.   This protects their young from the mammals that might climb the tree on land.

This particular Compass Lake osprey is the loudest of all I have ever heard.  Maybe it is just that the lake is so quiet you can hear nature better.  It is comforting to see a new generation of ospreys coming back to the lake, especially in the midst of so much destruction.   It reminds us of the rejuvenating power of nature and indeed, of man.

I watched osprey raising their young with my own grandfather 60 years ago.  Despite being on the edge of extinction in the 1970s, my own grandchildren will get to see that beautiful sight themselves, and if they listen closely they too will hear the cry of the osprey. 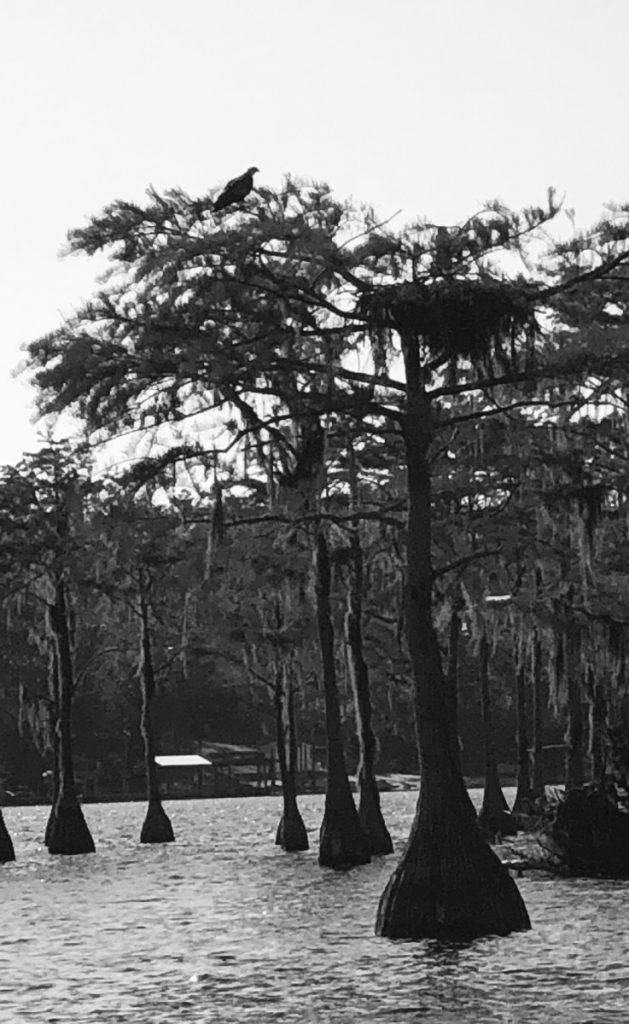