Each year the Georgia Press Association (GPA) partners with the Georgia Municipal Association and seeks annual nominations for its Service to the Community Trophy. This award honors the work local newspapers perform throughout the year and is presented to the one newspaper in Georgia judged to have made the greatest contribution of lasting social importance to its local community. At last Thursday’s opening luncheon of the Georgia Press Association’s 133rd annual convention, the 2019 Service to the Community Trophy was presented to the Donalsonville News.

The recognition cited the newspaper’s service to its community before and during the aftermath of Hurricane Michael, its contribution to the betterment of the community, the promotion of the BetterWay Initiative, the paper’s identification of specific issues of concern, its support for solutions to the problem and honored the personal involvement of the newspaper’s staff for making a positive, clear and lasting effect on the community.

In the letter of nomination submitted by Donalsonville-Seminole County Chamber of Commerce President Sarah
Avery, she stated “When one of the darkest days in our community arrived with the devastation of Hurricane Michael on October 10 of last year, dazed and emotionally compromised after personally weathering the storm’s destruction, Managing Editor David Maxwell, from the moment the storm was over, used the platforms of the Donalsonville News to serve this community. During the initial 21-day period of no electricity or Internet – a portion of which there was also no cell phone service – he comforted and calmed this community with his daily – and sometimes hourly – messages of hope and survival.

“Using printed flyers, Facebook and eventually, after power was restored, the pages of the Donalsonville News and its website, Maxwell provided vital survival information, emergency contact information and comforting and encouraging messages of neighbors helping neighbors and strangers becoming friends. I can attest that Maxwell, the Donalsonville News and the constant printed messages of  ‘We survived and we will stand tall again,’ reminded this entire community that hope had arrived and the sunrise of a brighter day was on our horizon.”

Larry Hanson, Executive Director of the Georgia Municipal Association, commented “We congratulate the Donalsonville News on this award. During a time of crisis, the newspaper was there informing and providing comfort to the community. The newspaper’s dedication to this mission was evident in the fact that despite the devastation caused by Hurricane Michael, the Donalsonville News never missed a print date and its readers were kept informed about recovery efforts and news of their friends and neighbors.In the aftermath of the storm, the newspaper provided inspiration and encouragement for Seminole County to come back even stronger than before. The Donalsonville News modeled what it truly means to be a community newspaper.” 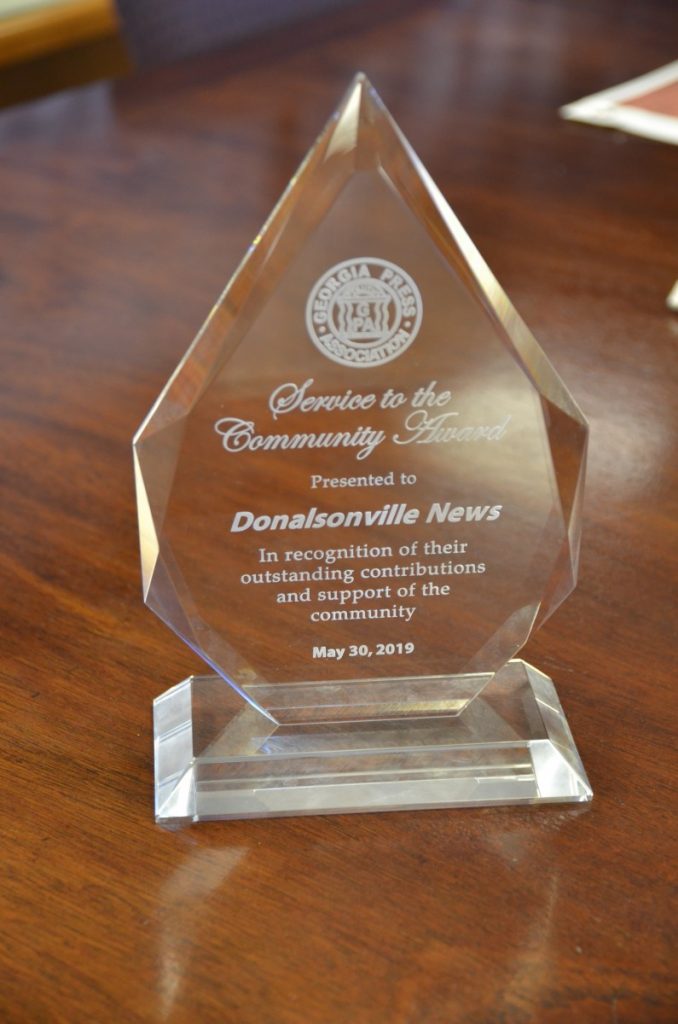 The contest was judged by members of the South Carolina Press Association and the winners were recognized for their achievements in journalism at this past week’s GPA Convention held at the Jekyll Island Club Hotel.

“Awards are great, but to know that we served our community well is icing on the cake. Receiving community service recognition takes an all-around team effort and is a testament to the paper’s commitment to the community and to the hard work and long hours each and every member of the newspaper’s family has put in over the past year,” commented Maxwell, adding, “this acknowledgement will also will provide the impetus to make the paper an even better newspaper in the next year.”

“It doesn’t get any better than this and I honestly love what I do. Working each day to tell the stories and to put the faces of the people in this community on the pages of their hometown newspaper is an honor. It has been the newspaper’s goal from day one to give our readers and advertisers exactly what they deserve – the absolute best.

Recognizing there are still areas in which to improve, we are constantly upping our standards. We are committed to serving our readers, our advertisers and our community, and we believe that our best journalistic efforts are ahead of us.

Receiving these honors tells us we are on the right track. We will never stop in our efforts to continue to improve and expand our coverage as we work to become the best weekly community newspaper in Georgia,” concluded Maxwell.