Hundreds of new laws passed by Georgia legislators earlier this year went into effect on Monday, July 1.  Here are some of the more noteworthy laws now in effect covering issues from human trafficking to flag displays.

House Bill 12 – This new law requires public schools, including local and state charter schools, to post a sign of the toll-free telephone number for the Division of Family and Children Services (DFCS) of the Department of Human Services to report child abuse or neglect at any time. The sign must be posted in a clearly visible location in a public area of the school.

House Bill 25 – This law will provide military service members civil relief concerning certain contractual obligations. This has been legalized by the Service Members Civil Relief Act. For example, if a service member is away and cannot get their things out of a storage locker due to deployment, they do not have to be legally fined, and cannot be sued for leaving their things.

House Bill 62 – Under this law, any health care facilities that conduct mammograms will be required to notify the patient when their results show dense breast tissue.

House Bill 228 – The minimum marriage age increase from 16 to 17 years old. The law states that a 17-year-old that wants to marry would have to be legally emancipated from their parents by a judge and undergo pre-marriage counselling. A 17-year-old would also not be allowed to marry someone more than four years older.

House Bill 282 – Law enforcement is now required to save evidence gathered from sexual assaults for up to 50 years. Stains, fluids and hair samples will be kept for that amount of time if no arrest is made. Officials say this will help lead to more arrests in lengthy cases.

House Bill 324 – The use of medical marijuana by registered patients was approved in 2015. This year, officials approved a way for the drug to be dispensed. The law states that six private companies can grow medical marijuana. Pharmacies can now provide medical marijuana oil to patients. Essentially, the law gives pharmacies the “first shot” at distributing the drug, but allows a state commission to seek out independent retail locations if there is a need.

House Bill 346 – This new law protects renters from eviction when they complain about unhealthy conditions. It will also help renters win court cases and remain in their homes. The law states landlords who wrongfully try to evict tenants would have to pay them one month’s rent, plus $500 and legal costs.

House Bill 530 – This law will require the Georgia Department of Education to provide a declaration of homeschooling to local school districts. Under HB 530, if a child is withdrawn from school without filing a declaration and the student stops attending school for 45 days, the school would be required to inform the Department of Family and Children Services.

Senate Bill 6 – This law will prohibit the flying of a drone over a jail or prison unless permission is granted by the warden, superintendent or their designated representative.

Senate Bill 9 – This law creates more sentencing options and charges for those who have sexually assaulted someone in their care, or to someone who they have disciplinary authority over. Consent can no longer be used as a defense.

Senate Bill 60 – The Department of Education will be required to post guidelines and relevant information on the nature and warning signs of sudden cardiac arrest on its website for students participating in interscholastic athletic activities, their parents or guardians and coaches, under this bill.

In addition, under the law, any student who passes out either while participating in or immediately after an athletic activity who has a history of fainting during or after the activity must be removed at that time until they are cleared in writing by a healthcare provider.

Senate Bill 67- This law will allow school systems with buildings that are at least 20 years old and have been mostly destroyed by natural disaster or fire to receive regular funding to repair or replace damaged buildings. SB 67 also creates a pathway for schools to qualify for certain grants if the school system’s five-year revenue from SPLOST does not generate enough funds for the required updates or repairs.

Atlanta is one of the nation’s hubs for human trafficking due to Hartsfield-Jackson International Airport. Georgia is trying to significantly reduce the number of human trafficking victims and create a safer environment for them.

Senate Bill  170 –The state will now require buildings that display state and national flags to also display the Honor and Remember Flag as the state’s emblem of the service and sacrifice of the members of the armed forces. The flag will only be up on designated days.

Not included in the above new laws that went into effect July 1, 2019, is the new Fetal Heartbeat Abortion Law, which Governor Brian Kemp approved and signed last May. Unless stopped by the courts it is set to go into effect
January 1, 2020. 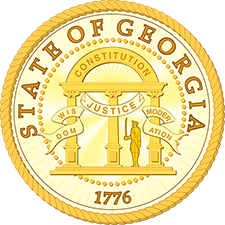