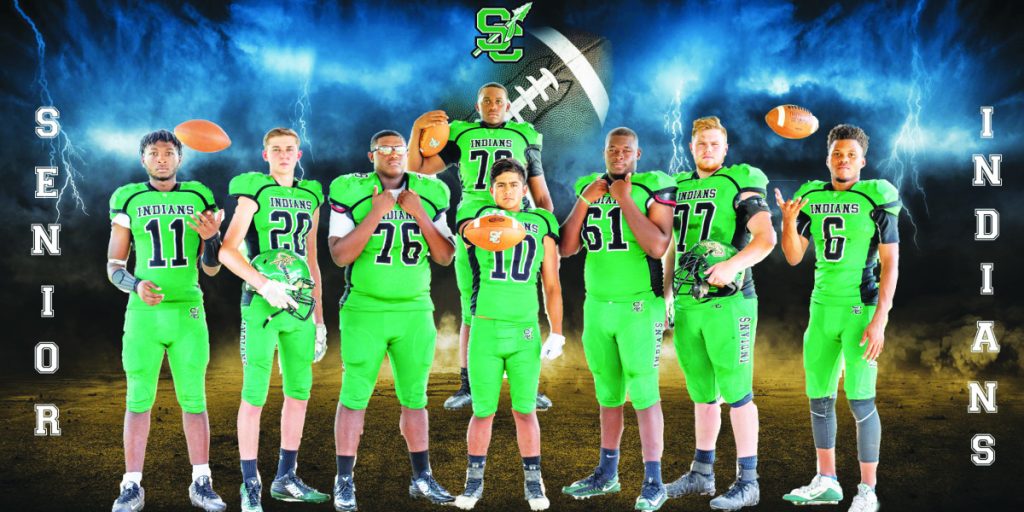 The Seminole County Indians open the 2019 season at home this Friday night with a scrimmage game against the Early County Bobcats. Kick off is at 7:30 p.m.

The Friday night lights will shine on Seminole Stadium for the first time since September 28, 2018, the last game the Indians played before last year’s football season and the entire community was devastated by the wrath of Hurricane Michael.

The powerful force of Hurricane Michael left widespread devastation and forced the Indian football team to scramble to finish out the season, working around the fallen trees and damaged homes and buildings, including the school’s football field.

The Indians had started off 4-2, including 4-1 in Region 1-A play, when the Category 5 hurricane plowed through the area. Facing the heart of the schedule, they had to play the last five games on the road and lost four. Included was a three-game stretch over eight days.

Despite the tough situation, the Indians did make it into the state playoffs.

Today, almost 10 months from that devastating day of October 10, the community, still recovering from the hurricane’s wrath, is adjusting to its new normal and the Seminole County’s football team is focusing on the 2019 season.

New head coach Trey Woolf, who takes over after spending last year at Daleville in Alabama, feels Indian players can draw on that experience when dealing with tough circumstances during this football season.

“I think they should,” Woolf said. “They went through a lot of adversity last year. They were out of school for 20 days. I have mentioned that to them a few times – remember what you did last year and what you fought through last year, you go through a practice or go through this.”

Though working in Daleville, Woolf knows all about the hurricane and what it did, as he lived in nearby Blakely, which also received substantial damage, though not to the degree as Donalsonville.

He has a lot of respect for the people, the players and coaches, including head coach Wes Williams, at Seminole County for what they endured and how they handled it.

“I think these guys are really resilient,” Woolf said. “Coach Williams and the staff did a great job of keeping them together last year. It was amazing what they did. I don’t think they have had a home game here since the end of September.

“The community, I don’t think they have completely recovered, but from the outside looking in, they did a great job of sticking together and helping each other.”

While the Indians had to hit the road at the end of last year, they will see the friendly confines of home most of this season. After short road trips to Bainbridge and Calhoun County in the first three weeks, they have seven home games in the last eight weeks.

“We are looking at those guys, along with Seniors Tyrek Jones, Barry Adams and D. J. Grimsley to lead us,” coach Woolf added.

The backfield was hit hard by graduation, including at quarterback. Woolf said Sophomore Nick Cull and Freshmen Boris Melton and Zha Martin are battling for the quarterback position.

Though he didn’t start, Jeremiah Sims returns with a lot of playing time at running back as does Stacy Butler, a Junior. Sophomores Tyrell Rainey and Layton Cowart are also expected to work in the backfield.

The line up front will be anchored by the three Seniors Cooper Bell, Lee Martin and Dendric Reynolds. D. J. Grimsley, a Senior, Jesse Smith and Clay Towns, both Juniors, and Sophomores Jamarvion Jones and Nick Barber are other projected line starters.

Barry Adams, a Senior, Aiden Sherrer and Moses James both Juniors, and Freshman Hugh Scarborough are expected to highlight the wide receivers.

Cooper Bell, Lee Martin and Dendric Reynolds will also anchor the defensive line, along with Senior Barry Adams. Seniors Jeremiah Sims and Jose Alvarez return as linebacker starters with Tyree Rainey back as a safety starter.

Stacy Butler, a Junior and Freshman Boris Wilson are other players expected to contribute as linebackers.

Brayson Reynolds, a Junior, returns to handle Seminole County’s kicking duties. He will also handle the punting this season.

As the season approaches, Woolf admits to feeling a little behind after he took the job following the Spring.

“I feel like we are a month behind by not being here for Spring,” Woolf said. “We had to start installing in June which we should have had installed in the Spring. We are behind, but we have to keep plugging. We have time to get there and they are getting better.”

While region play dominates the schedule – nine of the 10 games are region counters – Woolf feels the Indians can do enough to earn a playoff spot for the second straight year.

“I don’t think there is any doubt there is a possibility we can do that,” Woolf said. “That is what we are hoping to do. What we have to do is get to the point where we are not just getting in, but moving in the playoffs, getting to the second round and third round.”

For Woolf, the opportunity to coach at Seminole County brings him back full circle. He had a two-year stint at the school after graduating from college before moving on to a long tenure at Early County, including 16 years as a head coach.