The day has finally arrived. Next Saturday, the University of Georgia will officially name the field at Sanford Stadium as Dooley Field. It’s about time. In fact, it is long overdue.

You now join fellow Hall of Fame coaches Bear Bryant, Shug Jordan, Frank Broyles, Johnny Vaught, Bobby Dodd, Gen. Robert Neyland, Eddie Robinson, Don Faurot and, yes, Steve Spurrier among others, who have had the stadium or the field on which they coached named for them.

Of that group, only Robinson, who coached at Grambling for 56 years and won 408 games; Bear Bryant, who won 323 games at Maryland, Kentucky and Alabama — and six national championships — and Spurrier with 228 wins at Duke, Florida and South Carolina, have more wins than you. In 24 years at UGA, you compiled 201 victories. And you did it with style and grace.

We have been friends for a long time. I am sure you remember the days when my boss at Southern Bell, Jasper Dorsey, would have me call you on Monday after Saturday’s game to give you some suggestions about next week’s game. If I had been you, I would have said that if Jasper Dorsey wants to talk to me, tell him to call me directly. But you didn’t do that. Thank you.

My son, Ken, and his best friend, Rick, attended your football camp for several years. Rick later moved to California. During the First Gulf War, he flew refueling tankers, a dangerous assignment. I asked you if you would drop him a note, which you did. Rick kept that note taped on the cockpit of his C5A. As luck would have it, his co-pilot was a Georgia Tech grad. He had a lot of fun with that.

After his military service, Rick became a captain at American Airlines. Later, he was diagnosed with an insidious form of cancer. I asked if you might autograph a UGA hat and send it to him in California to wear whenever his adopted Bulldogs were on television. Not only did you do that, you sent him a letter of encouragement along with the cap. At Rick’s funeral, the minister said that letter was one of his prized possessions. That is what friends do for friends.

I am sorry I will be unable to attend the dedication at Sanford Stadium or the reception the night before, but I will be there in spirit.

I first started advocating to have your accomplishments recognized at Sanford Stadium in 2003 and have kept up the drumbeat ever since with little success. So much for the power of the press. It took Gov. Brian Kemp to make it happen. And he did. (If the Governor happens to be looking on, I have given you all the credit when responding to letters of congratulations from readers. Honesty is the best policy.)

It is said that success has a thousand fathers and defeat is an orphan. You will have a lot of people glad-handing you Friday night who didn’t do squat to help. I know. I called a lot of them seeking their support, some very prominent. Some did not return my repeated phone calls or emails. Those who did wished me well and that was all. Reading between the lines, I believe they thought that as long as your nemesis, Don Leebern, was on the Board of Regents, it wasn’t going to happen, so why bother.

There was one notable exception: Tommy Lawhorne, the outstanding linebacker in your early days at UGA, who today is Dr. Thomas W. Lawhorne, the prominent vascular surgeon from Columbus. No one worked harder to see this day come than Tommy Lawhorne. I understand now why he was such an outstanding football player. He is tenacious.

He wrote op-ed pieces advocating this recognition and letters to the editor. He made visits to Leeburn to no avail. He called his colleagues trying to get them involved and over the years shared with me his frustrations at all the obstacles he encountered. But he never gave up. Others are now going to tell you how they worked behind the scenes to make it happen, but I am here to set the record straight. Tommy Lawhorne was out front when everybody else was standing on the sidelines.

Enough about the past. Let’s talk about the future. From this time forward, the Georgia Bulldogs will play their games on Dooley Field at Sanford Stadium. Enjoy this honor, my friend. You have earned it. 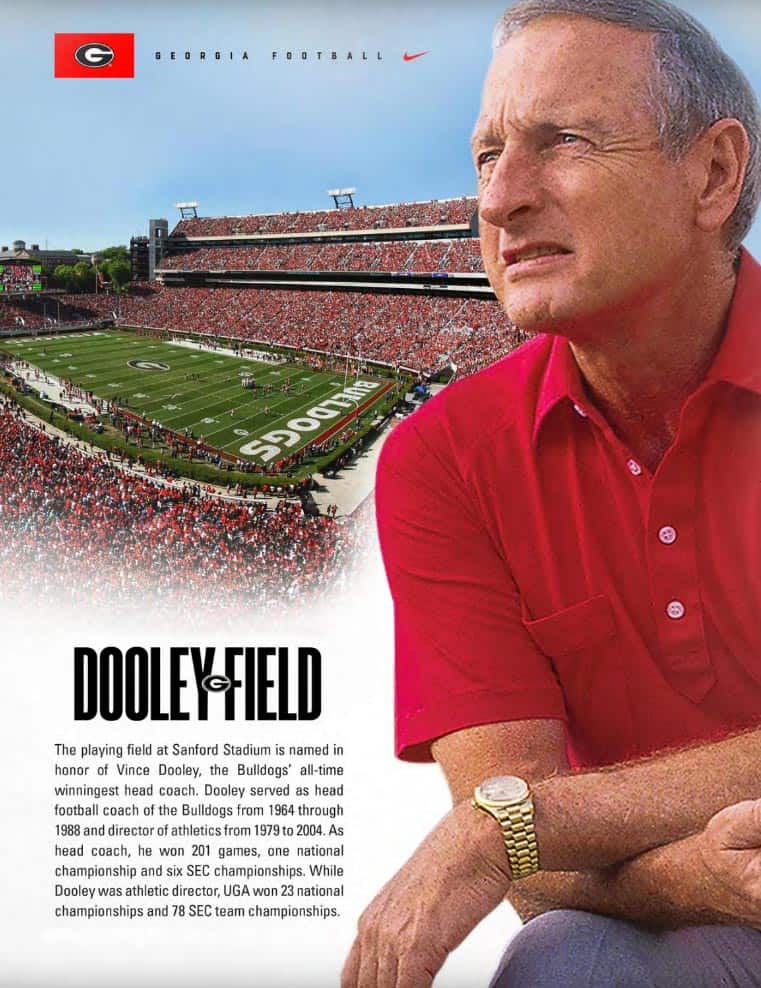 On your mark, get ready, get set, rejoice!