Everyone is invited to join the fun and the run October 19 for the inaugural running and walking of the Rejoice Run & Mom’s Mile (formerly known as the Joyce’s Jog 5K Run/Walk and 1 Mile Fun Run)! Proceeds will continue to support breast cancer services, resources and programs right here at home in Seminole County.

Susan Hand, a runner for 42 years and a breast cancer survivor, will be the race’s featured speaker.

Pre-registration for the race and walk which kicks off the community’s Harvest Festival’s events closes on October 17th at 11:00 p.m.

Register early. T-shirts are guaranteed on race day to those who want one if registered by October 11th! Race applications are available at the Donalsonville-Seminole County Chamber office and online at http://signmeup.com/Rejoicerun

For additional information contact Steffey Vines at  rejoicerun@gmail.com or 229-254-2867 or inquire at Donalsonville Hospital online at http://donalsonvillehospital.org

Cancer tried to kill me. Running saved me.

Susan Hand, 67, participated in the very first Joyce’s Jog, in 2007. Having recently recovered from her first diagnosis of breast cancer, she wanted to join this particular run because it called attention to breast cancer awareness.

Since then, she has missed only a few, with the biggest one being the one in 2012. She had been diagnosed with breast cancer again, and was taking chemo treatments. That Saturday she was so sick she couldn’t get out of bed; her daughter-in-law, Nichole, came to Donalsonville and took Susan’s place in the race, and brought the t-shirt back to her.

Susan remembers what she calls her “week from hell.”

On September 24, 2004, Susan went for her yearly mammogram, which eventually led to a diagnosis of stage 1, noninvasive breast cancer. (Remember, 2004 was when this area had several hurricanes – Charlie, Frances, Gene, Ivan …  just one after the other.) After her mammogram on Friday, the doctor’s office called and asked her to come back on Monday; Susan replied no, she wouldn’t; didn’t they know there was a hurricane? Then she told them that if she didn’t get blown away, she would come back Tuesday. She went Tuesday, had another mammogram, followed (that day) by an ultrasound. Her doctor called Tuesday afternoon, and she went back Wednesday for a biopsy. She came home and was anxious about the results, waiting to hear from her doctors, and decided to go jogging to get her mind off of it and release some stress. While running, she was bitten by a dog and ended up in First Med in Dothan. She received treatment there and was told if the dog couldn’t be located, she would need to take shots to protect against rabies. Fortunately, Animal Control found the dog, and sent it to Montgomery. On Thursday, Susan found out that the dog had no communicable disease that could be transmitted by a bite, one bright spot in that week. On Friday, she got a call telling her that the biopsy was positive.

On October 6, Susan went to Birmingham and saw Dr. Kirby Bland. She had a lumpectomy, followed by 36 radiation treatments. That was it. She felt great! She couldn’t tell anything was wrong with her, and went on with her normal life, jogging as usual, and it just like it never happened.

Until 2012, when she found another lump.

She called her oncologist in Dothan and made an appointment for him to check it.  She went that same day and had an ultrasound, followed by a biopsy. She was diagnosed with stage 2B, invasive, aggressive breast cancer. She requested to go back to Birmingham and see Dr. Bland again, who recommended that she have a radical, bilateral mastectomy, which included the removal of 13 lymph nodes, followed by chemotherapy.

Susan had surgery on June 6, 2012 and started chemo on July 14. Needing to do something that defined her – Susan – and took her focus off the cancer, she decided to participate in a 5K in Dothan, scheduled for July 28. Her husband tried to get her reconsider, and when she convinced him that it was something she needed to do, he agreed. The day of the race, Ronnie also registered, along with grandson Mason (who was 14 at the time); they would not let her walk alone. The three of them walked, and crossed the finish line, together.

Susan continued the treatments, driving to Birmingham once a week (the location of her choice), for six weeks. When she finished with these, she started another round of a different chemo; by the middle of September, she was bald headed. Basically, losing her hair was the only bad thing about these treatments; they didn’t make her sick, or have any other side effects. That would not be the case with her third round of chemo, which she started on October 3. This was the worst chemotherapy; she had to have three doses of this particular kind, and it made her extremely sick every time. This was the chemo that kept her from participating in Joyce’s Jog in 2012.

All together, she took some form of chemo treatment for a full year.

Right now, she is living life to the fullest. She gets regular mammograms, and watches her health. She asked her oncologist in Dothan if she was cancer free. He said, “Susan, I’m going to be honest with you. You are high risk, with an 80% chance that the cancer will come back.” But Susan doesn’t dwell on that; she says she just can’t focus on that. She continues to live her life as she always has. She has done 5Ks, 10Ks, half marathons, and a full marathon.  One of her favorite quotes is, “Cancer tried to kill me. Running saved me.” She says, “You just have to look at it that way.” She never quit, she never gave up. Susan commented, “Whenever I was so sick and so scared, there was not a day that went by that my husband did not tell me, ‘Sue, it’ll be over soon, it’ll be over soon.’ And now here it is, seven years later and it’s over!” Despite what her doctor told her, Susan says she believes, in her heart of hearts, that the cancer will never come back.

Susan urges all women to keep a check on your health and get regular mammograms. And she says, “If you don’t like what one doctor tells you, go to another one. They are just physicians, they’re not God”. 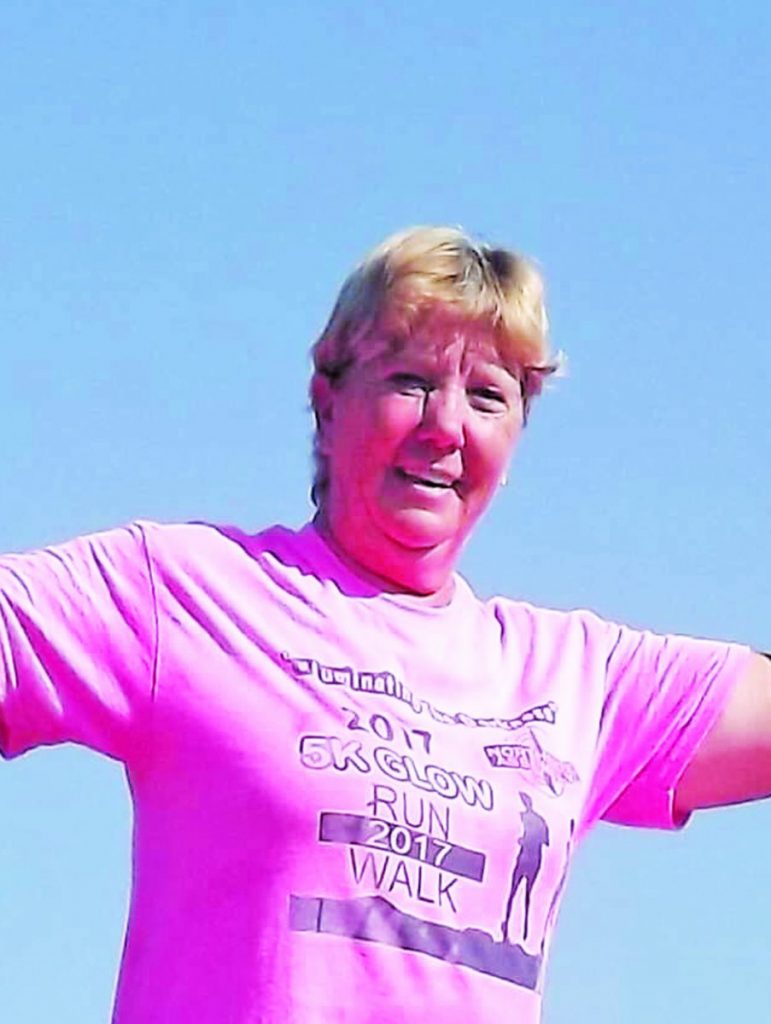