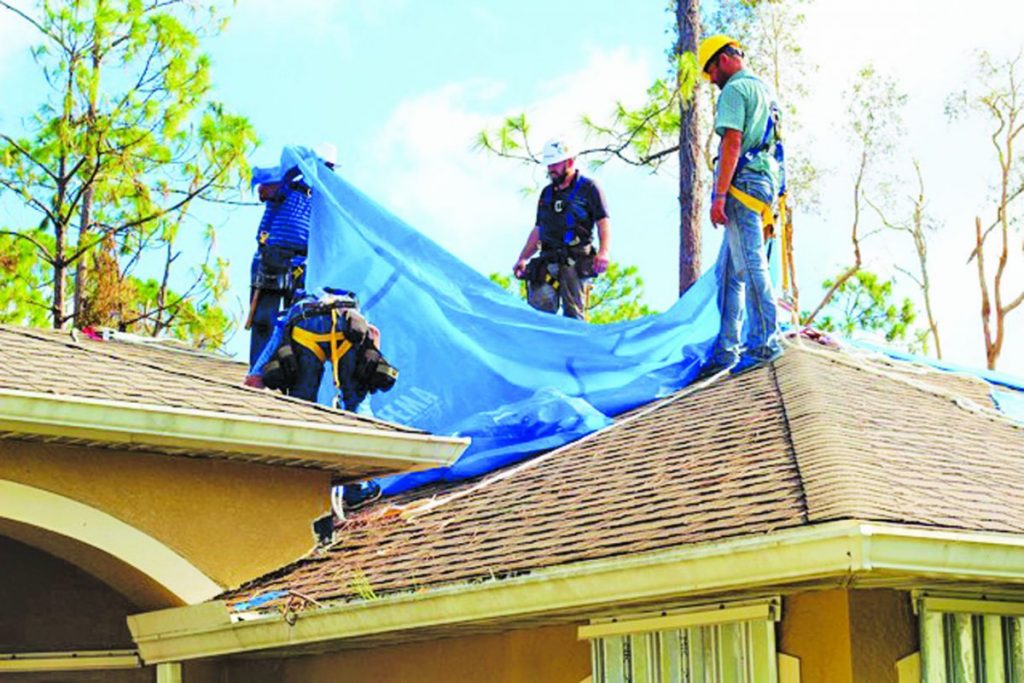 “It was just like a war zone. All types of electrical wires were down, poles were down, houses were torn up,” says Donalsonville city council member Lindsay Register Sr. “Some houses were so destroyed that they totally demolished them. It was something like I’ve never seen before — even at my age.”

Hurricane Michael brought tremendous response from all over the United States – Texas, South Carolina, Alabama, Colorado, Virginia, Kentucky to name a few. Organizations like FEMA, SAMARITANS PURSE, RED CROSS did a wonderful job but for the most part, they have moved on to other disasters. Many churches and volunteers in the area have given and continue to give great effort, resources  to  the needs in our community, but the blue tarps say to all who pass by that “foundational needs” still exist.

“You can’t drive maybe a hundred feet without seeing a blue tarp right now,” says Nate Lehman with the Seminole-Donalsonville Long Term Recovery Group and pastor of Friendship United Methodist Church in Donalsonville. “Many of the people we’re serving, they did not have insurance or what insurance they had wasn’t enough.”

The recovery group is working to make that number zero with its Blue Tarp Project.

“We try and assist people in getting new roofs on their houses. Our goal is to remove every blue tarp from Seminole County and our community,” says Lehman.

Contributions from community members are helping make it happen.

“We are funded straight through donations and a roof roughly costs anywhere from $6,000 to $10,000 to replace,” says Lehman.

“The Blue Tarp Project is really a continuation response to the great needs in this community.  Simply put, the goal for the ‘Blue Tarp Project’  is to remove as many tarps as possible,” said Billy Williams, who vets applicants and coordinates the aid for the Blue Tarp Project started at Friendship United Methodist Church in Donalsonville.

Through  a generous financial investment designated for Hurricane Michael relief, Blue Tarp Project seeks to assist and help relieve the financial burden for non insured owners who are in need of roof repair.

“While many of us have been blessed to return to some sort of “norm”, countless others in our community did not have insurance or the resources to mitigate their circumstances. Blue Tarp is committed to those who qualify (owner, denied by FEMA, etc.) whose roof is damaged and are in need of financial support.

Part of the challenge now is just identifying those who most need the help. The program is funded through donations, but homeowners are asked to chip in what they can,” added Williams.

The local recovery group also hosts teams doing debris cleanup and general repair volunteers from all over southwest Georgia. “We have about a mission team a week coming in right now. We provide them a space to sleep and eat and just be comfortable while they’re here,” says Lehman.

County residents still in need of roof repairs are encouraged to fill out a short application on the recovery group’s Facebook page. Log in to Facebook and search for the Seminole-Donalsonville Long Term Recovery Group page.

Donations towards the Blue Tarp Project are accepted at Friendship United Methodist Church in Donalsonville.

Blue Tarp is a non-profit organization and depends on donations, when the funds are depleted the project will be suspended. However, a new  web site called Givelify is receiving donations for Blue Tarp. You can access at Givelify.com then  select Blue Tarp.