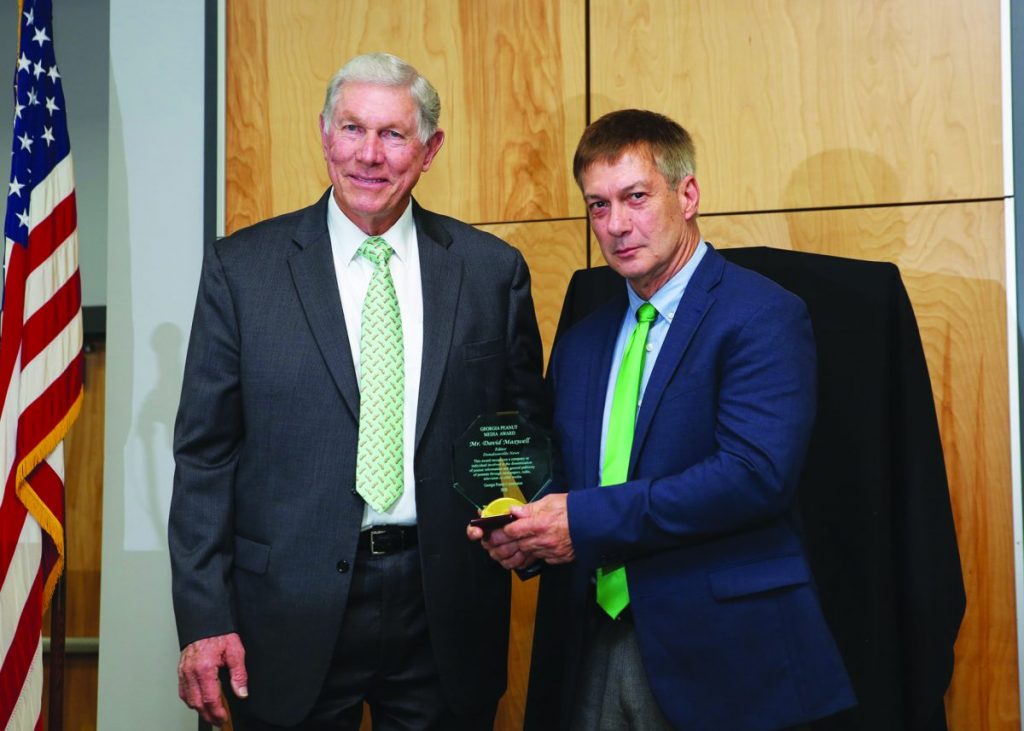 More than 1,600 attendees were able to fine-tune their farming operations with information gained at the 44th annual Georgia Peanut Farm Show and Conference on January 16 at the University of Georgia Tifton Campus Conference Center in Tifton.

The Georgia Peanut Commission’s 2020 Georgia Peanut Media award was presented to David Maxwell, managing editor of the Donalsonville News for  his promotion of Seminole County agriculture, Georgia Peanut Commission’s interests, and for his coverage in the Donalsonville News of survival and recovery in the aftermath of Hurricane Michael’s devastation. In presenting the award it was noted that David has led efforts within the Donalsonville Community to be a champion in boosting local business, civic, religious and cultural interests and in educating all on topics from local government and education to the next town event. Over the past six years, the Donalsonville News, under the leadership of David, has been the driving force for positive change in the community. Maxwell’s editorials and feature articles have helped to bring the pride back to the community.

Multiple projects of his creation were in motion when the devastation of Hurricane Michael arrived. From the moment the storm was over, David used the platforms of the Donalsonville News to serve his community. During the initial 21-day period of no electricity or Internet he comforted and calmed this community with his daily – and sometimes hourly – messages of hope and survival. Using printed flyers, Facebook and eventually, after power was restored, the pages of the Donalsonville News and its website, Maxwell provided vital survival information, emergency contact information and comforting and encouraging messages of neighbors helping neighbors and strangers becoming friends.

Maxwell commented, “I love my job and I am so very proud people realize some of the reasons why – the weekly opportunities to promote the interests of the citizens of Seminole County and to serve the readers of the Donalsonville News.”

This year’s Outstanding Georgia Peanut Farmer of the Year Award for District 1 was awarded to Jud Greene. Unfortunately, Jud passed away on Dec. 27, 2019, before he could be recognized for this award. His mother, Barbara, and brother, Joel, were in attendance to accept the award on his behalf.

Jud followed in his father’s footsteps and became an award-winning farmer. He farmed in Decatur County where he grew peanuts, cotton and corn. In 1997, Jud was named Ag Man of the Year for Decatur County and he was recognized with the peanut award in 1997, 2002, 2004 and 2005.

Jud graduated in Class 4 of the Peanut Leadership Academy. During his graduation he was asked to bring a few remarks regarding the program. Jud took this seriously and prepared a set of handwritten notes about what the program meant to him. Above all, he valued the friendships he gained through the program. He also loved attending the annual Southern Peanut Growers Conference with his wife Rhonda and keeping in touch with his peanut family.

Through the years, Jud was credited for the research work he did with the University of Georgia Peanut Extension Team and with Dow Agrosciences (now Corteva).

He worked on several research trials with Dr. Bob Kemerait and Dr. Tim Brenneman through the years, especially work on nematode management. Much of what we know about managing root-knot nematodes on peanut was confirmed for growers in field trials conducted on Jud’s farm. According to Dr. Kemerait, Jud’s commitment to improving his crop productivity for himself and others was unquestionable. He had an open mind for the full impact of research over time instead of a single trial.

John Richburg with Corteva worked on corn, cotton and peanut research collaborations for the past 10 years with Jud. However, Jud had worked on trials with the company since the mid-1980s.

John had this to say about Jud … Some of the products Jud helped Corteva develop included Telone nematicide, Lorsban, Tracer and Intrepid Edge insecticides, and Sonalan and Strongarm herbicides in peanuts, not to mention a number of other varieties, traits and products in cotton.  Jud was the perfect farmer to work with as he had a keen interest in being on the cutting edge of new research that would benefit Georgia growers. Regardless of the complexity of what I needed to do on his farm he was always flexible and would accommodate my research needs.  Jud was a true friend to Industry and Academia as he always had 4-5 others conducting research on his farm each season. Jud made a lasting impact on Georgia agriculture through the research collaborations and the technologies he helped develop.

Jud was named the Valedictorian of his high school and was a proud graduate of ABAC and attended the University of Georgia. He was a member of the Iron City Methodist Church and was a member of Gideons International.

The one-day show, sponsored by the Georgia Peanut Commission, offered farmers a chance to view the products and services of 113 exhibitors, as well as a day of education. The University of Georgia Peanut Team presented an educational peanut production seminar focusing on common mistakes with fertility, weed, insect and disease management that reduce a farmer’s profitability. An industry seed seminar was held, which highlighted peanut varieties available for 2020.