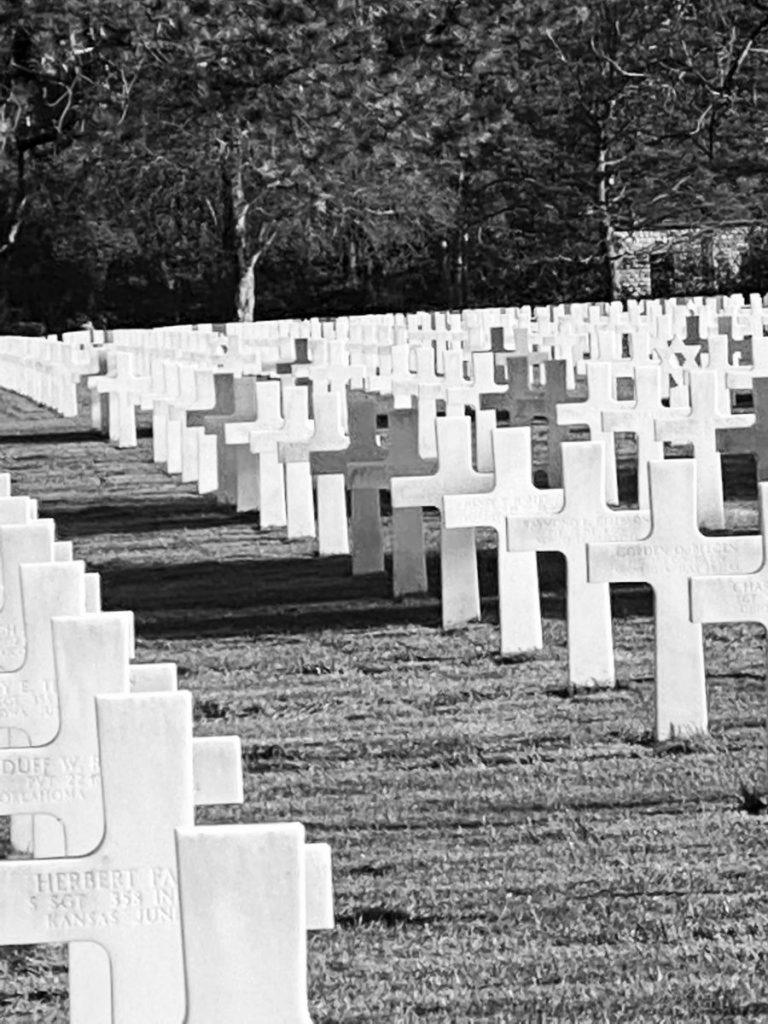 Pictured here is the photo referred to in the article. Billy’s Dad’s marker is the second shadowed one  in the center of the photo

General of the Armies John J. Pershing was speaking about the sacrifice of the Allied soldiers who gave the ultimate sacrifice in defending the United States of America.  While he had been the Commander of the American Expeditionary Forces in World War I, he uttered these words in the headline as the Founder and first chairman of the American Battle Monuments Commission which operates the cemeteries where America’s fallen heroes rest around the world.

Mary Lou and I had the opportunity to visit the Normandy American Cemetery recently.  It is located at Colleville-sur-Mer, France.  We took a train from Paris down to Caen, France where we spent the night.  We had a guide from the War Memorial Museum in Caen take us to Omaha Beach, the Normandy American Cemetery and other places of interest.   It was a visit we will never forget.

We have spent much of our adult lives visiting cemeteries around the world.   It is a habit born out of our love for genealogy and history.  Never have we visited a place so beautiful, so poignant, so full of respect and honor for those resting there.

The birds were singing on the sunny, cold windy day.  Gardeners were meticulously tending to the grass.  Thousands of white crosses and Stars of David stood in perfect symmetry, their white color a stark contrast against the deep green grass.

We slowly found our way to our destination:  Plot E, Row 17, Grave 30.  In the Winter, you cannot walk amongst the headstones because of the heavy rains.   However, there are walkways that divide the areas into smaller grids.  Before long, we found the object of our search.

John Wilber McDougal, Jr. died on August 1, 1944, one week after he was mortally wounded.  McDougal was a 2nd Lieutenant in the 22nd Infantry Regiment of the 4th Infantry Division.

McDougal left behind a young wife and an infant son.  He left for Europe on the day after that son’s first birthday.  It was the last time they would ever see each other.

Part of our determination to find the resting place of this particular fallen hero was that the infant son was our neighbor for 23 years and friend for even longer, Billy Grantham of Donalsonville.

While Billy carried the last name of his adopted father who had raised him, he gave the McDougal name to his own children in honor of the father and grandfather they never knew.

Billy and his immediate family have never made the trip to Colleville-sur-Mer to see the resting place of his father.  I wish I could convey to him just how beautiful that spot overlooking the English Channel truly is.

As I stood looking at the cross honoring a fallen soldier I never knew, I wished that I could tell him what a fine man his son grew up to be and what fine grandchildren and great-grandchildren carry his own legacy.

I tried to take a picture of the grave to give to the family when I returned home.  It is hard to pick out a particular cross in a field of thousands of similar white crosses.  About that time the sun cast a thin shadow caused by a narrow tree.  It caused two crosses to have a blue tint in each row, the second of which was McDougal’s.  In that brief moment, God marked the grave of John Wilber McDougal, Jr. so that his family could see where he rests.

75 years and six months later, time has not dimmed the glory of this particular hero’s deeds.  May he continue to rest in peace for all eternity.