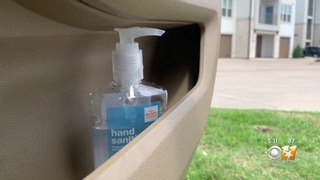 Hand sanitizer most likely will not explode in a hot vehicle; however, sanitizer left too long exposed to high temperatures, could cause the alcohol to lose potency

In our new, strange COVID-19 world, there are a whole host of new normals to adjust to: wearing a mask in public, avoiding large crowds, and washing your hands far more frequently than you ever thought possible.

But, fortunately, you don’t need to add “take the hand sanitizer out of the car” to that list, although it’s probably a good idea for a different reason than you might think.

Donalsonville Fire Chief Dean King commented, “As long as it is kept out of direct sunlight the possibility of a hand sanitizer container exploding is nearly impossible from ambient temperature.” According to King, It takes internal pressure to make a container of any kind explode and that pressure is usually created by heat being applied to the container. The heat must be hot enough to make the contents boil and create vapor which exerts pressure on the insides of the container.

“We call that vapor pressure,” added King. “The highest temperature ever recorded inside of a vehicle to date is 172 degrees. Could that temperature cause a container of hand sanitizer to expand? Yes. Because the containers are not made to withstand a lot of internal pressure. Is it likely to explode? It is possible if the internal pressure exceeds what the container can withstand. Could it cause a fire? Only if there is a flame present.”

The ignition temperature of the alcohol in the sanitizer is between 680 to 700 degrees. For comparison, paper burns at 451 degrees Fahrenheit and a butane lighter flame burns around 3000 degrees. So, without a flame present there can be no fire.

The Donalsonville Fire Rescue Department recommends that you follow these safety precautions when using and storing your hand sanitizer: Do not apply hand sanitizer while near an open flame – especially inside of a vehicle. Keep hand sanitizer containers in vehicles stored out of direct sunlight in the console or in door pockets.

The main concern from leaving alcohol-based hand sanitizer in a hot car, however, could be for a different reason than fire ignition. Alcohol in hand sanitizer can partially evaporate in hotter temperatures, and alcohol is what the Center for Disease Control recommends for effective hand-washing and disinfecting. In other words, hand sanitizer could lose its potency and value if left in hot temperatures for long enough.

If you want to be extra careful, it’s probably a good idea to pull hand sanitizer out of your car, or at least put it in a shaded area away from direct sunlight.

With temperatures warming up, it’s probably a good thing to keep in mind over the next few weeks. But as always, be careful with what you read or see on the internet.

Editor’s note: As of today, the Donalsonville Fire Rescue, Seminole County VFD, Iron City VFD and Spring Creek VFD have not received any calls involving hand sanitizer containers exploding in vehicles locally nor have we been made aware of any vehicle fires caused by keeping hand sanitizer in the vehicle.