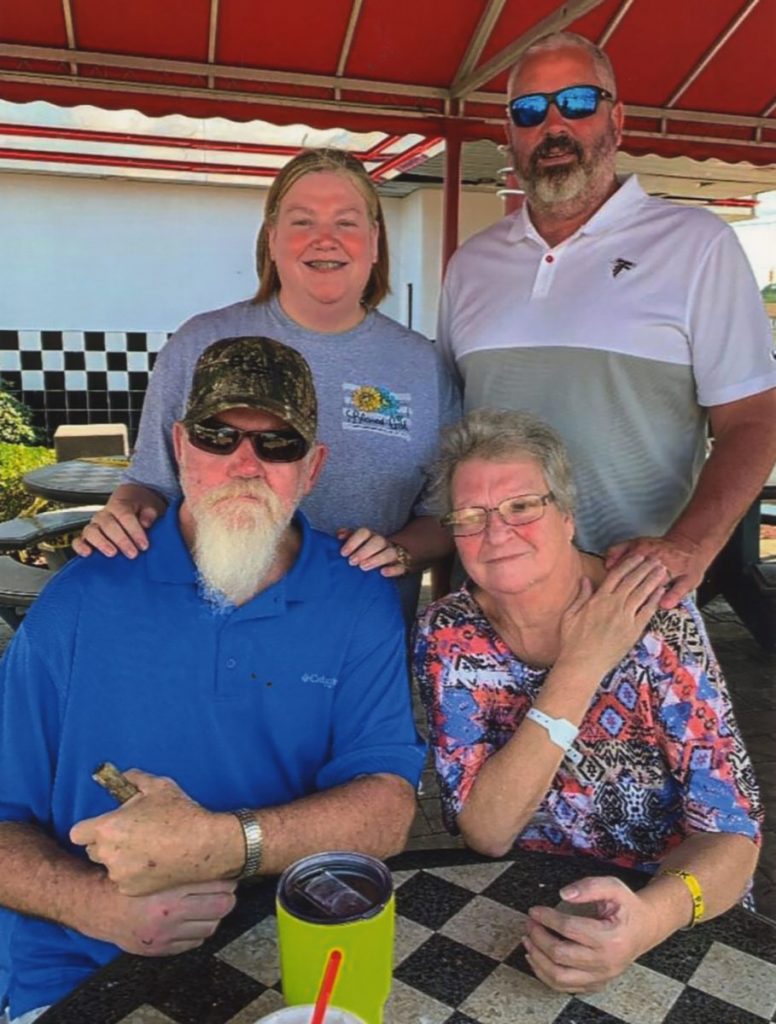 Pictured above, seated, Buster and Gwen Hurley; standing, their daughter and son, Tracey and John

Who knew on March 29, 2020, that the life of Gwen Hurley and the lives of her family members would be forever turned upside down?

On Sunday, March 29, Gwen Hurley began to not feel so well and went to Donalsonville Hospital Emergency Room with a temp of 103. She was told to go home and take Tylenol for her temp and self quarantine herself and to call her family doctor on Monday morning and they would advise her what to do. So on that Monday morning, March 30 the nurse from Dr. Breckenridge’s office called her to see what was going on; and a few minutes later Dr. Breckenridge called and spoke with her and told her to pack a bag and come to the Emergency Room and that she would have a room available when she arrived. Upon arrival Gwen was tested for COVID-19 and on Wednesday, April 1 her test came back positive. After receiving the news of testing positive for the Coronavirus she really doesn’t remember a lot of what happened.

On Thursday, April 2, her husband, Lamar (Buster) Hurley, started running a fever and called Dr. Breckenridge’s office. They advised him to bring a bag and he would also be admitted. He was tested for COVID-19 and on Saturday, April 4 his test also came back positive.

Lamar’s conditions improved and he was allowed to come home on Friday, April 17; however, that was not the case for Gwen. On Tuesday, April 7, she was able to follow a few requested commands, but on Thursday, April 9, she slipped into a coma.

Gwen was intubated and on a ventilator for 21 days; Sunday, April 26, breathing tubes were taken out;  she was removed from the ventilator and put on a BiPap machine. For several weeks it was touch and go for Gwen.

Tracey commented, “One doctor told me that if it was his parent he would pull her off the vent and another doctor told me no way. I told the one doctor as long as she was improving some day by day and had some brain activity, that we would not be removing her from the vent; he informed me that we may be having this conversation again with a different outcome.”

On or around April 29th, Gwen was taken off of the BiPap machine and placed on a nasal cannula receiving three liters of oxygen.

“We were finally able to talk to her on Thursday, April 30, but could hardly hear what she was saying, but hearing her speak at all were some most welcome sounds.”

On Tuesday, May 5, Gwen was taken out of MICU and put on the fourth floor, still with the cannula in place, but now receiving only one liter of oxygen.

With Gwen’s conditions now steadily improving, on Friday, May 8, family members were able to spend some time with her for about three hours before Gwen was transported by ambulance to Columbus Specialty Hospital in Columbus, Georgia. Tracey added, “We laughed and cried during those three hours, but we were there with her.”

Tracey said her mother has always said that she would never ride on an airplane nor a helicopter. “So, I told her she had had her first flight a month earlier and didn’t even know anything about it and that it was very expensive, costing almost $55,000 from Donalsonville to Dothan.

On Monday, June 1, family members were able to pick Gwen up from Columbus and take her to Encompass Health and Rehab in Dothan for a little more therapy.

After being away from home for 72 days, Gwen made it back home to Iron City on Tuesday, June 9. During her time in the hospital she and her husband spent their 50th wedding anniversary, which was Friday, June 5, in different states.

Tracey added, “This just proves that there is a God and He always shows up in our time of need. God helps us to do what we can, and endure what we must, even in the darkest hours. But more, He wants to teach us that there are no rainbows without storm clouds and there are no diamonds without heavy pressure and enormous heat.”

The Hurleys would like to thank everyone for the calls, text messages and prayers that were sent up for our entire family during this time.