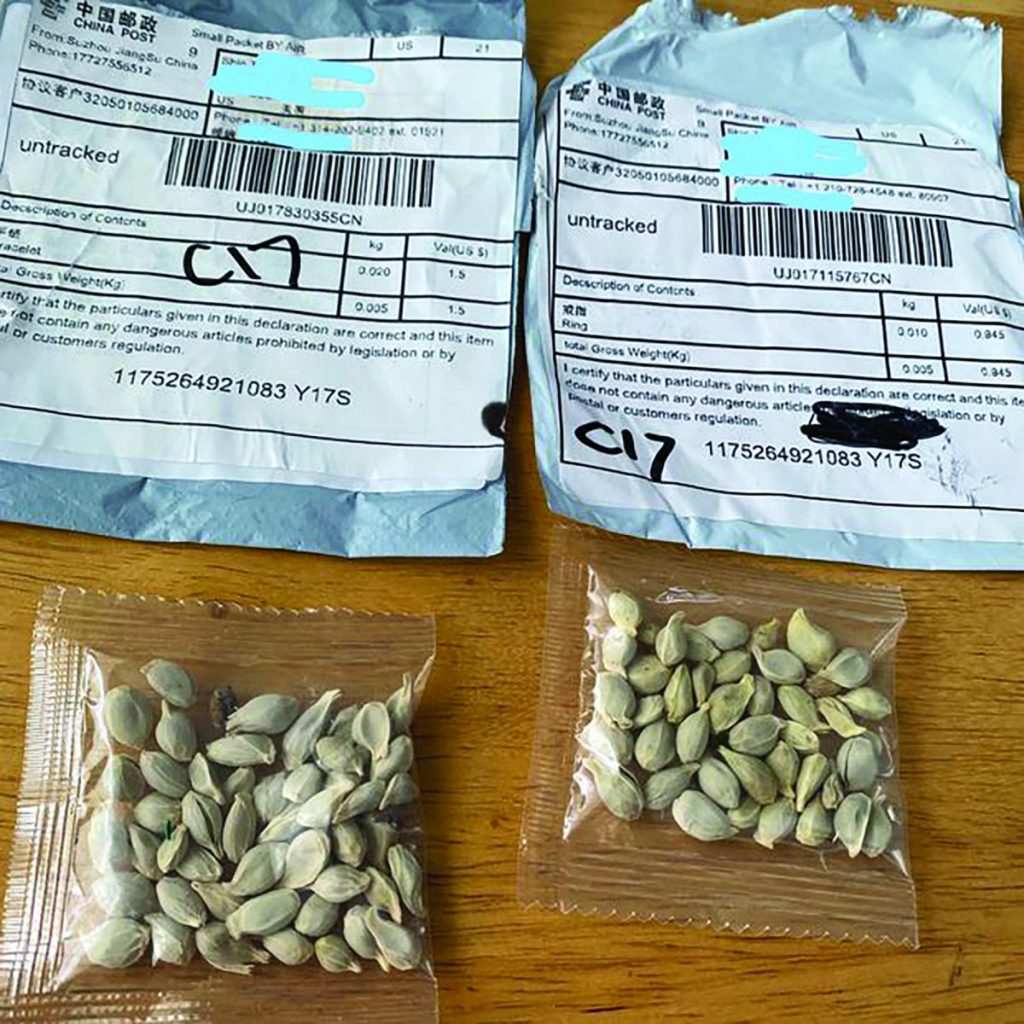 Anyone who has received unsolicited seeds in the mail from China or any other country is encouraged to contact the GDA Seed Lab at 229-386-3145 or email SeedLab@agr.georgia.gov.

The Georgia Department of Agriculture (GDA) has been notified that several Georgia residents have received unsolicited packages containing seeds that appear to have originated from China.  Recipients are strongly advised not to open the packages or plant the seeds.

“At this time, we are not sure what the seeds are and therefore are urging everyone to be exceedingly vigilant,” Georgia Agriculture Commissioner Gary W. Black says.  “If you have received one of these packages in the mail, please use extreme caution by not touching the contents and securing the package in a plastic bag.”

The types of seeds in the packages are unknown at this time and may be invasive plant species. The packages were sent by mail and may have Chinese writing on them.

Invasive species wreak havoc on the environment, displace or destroy native plants and insects and severely damage crops. Taking steps to prevent their introduction is the most effective method of reducing both the risk of invasive species infestations and the cost to control and mitigate those infestations.

The mysterious, unsolicited packages of seeds being sent to homes across America – prompting agriculture departments in at least 31 states to issue warnings against planting them – may be invasive species and could be tied to a fake product review scam, police and officials are saying.

The packages, based on photographs and statements from officials, appeared to have been shipped by China’s state-owned postal company and contained Chinese lettering on the exterior, advertising products ranging from jewelry to toys.

But, what’s actually inside seem to be random plant seeds. States from coast to coast have been urging residents to report the unexpected deliveries to their local agriculture departments over concerns that the seeds could be invasive or harmful species.

The packages have garnered the attention of federal investigators — with the U.S. Department of Agriculture’s (USDA) Animal and Plant Health Inspection Services (APHIS) working alongside the Department of Homeland Security’s Customs and Border Protection and other federal and state agencies.

“Do not plant seeds from unknown origins,” the USDA urged in a statement.

Officials in several states said there didn’t appear to be a clear pattern to the packages, which have been showing up at homes in the city, suburbs, and in rural areas. The number of packages being reported also varied. In Indiana, for instance, an official with the state attorney general’s office said it had received only a handful of reports, while in Ohio, officials have received roughly 150 calls about the packages over the past month.

It’s not the first time this type of scam has surfaced. In 2018, a Massachusetts couple who kept receiving mystery packages from Amazon containing items ranging from USB-powered humidifiers to rechargeable dog collars feared they were being targeted.

Here’s how the scam works: a seller trying to boost the ratings of their own merchandise sets up a fake email account to create an Amazon profile, then purchases the items with a gift card and ships them to the address of a random person.

Once the package is delivered, the owner of the Amazon account is then listed as a “verified buyer” of the product and can write a positive review of it that gets higher placement on product pages because of their status, James Thomson, a former business consultant for Amazon told the Boston Globe at the time when asked about the couple’s deliveries.

However, the deliveries of the plant seeds are more widespread and it’s not immediately clear which e-commerce website the fake reviews may be appearing on, if this is the motive behind the packages.

Anyone who has received unsolicited seeds in the mail from China or any other country is encouraged to contact the GDA Seed Lab at 229-386-3145 or email SeedLab@agr.georgia.gov.