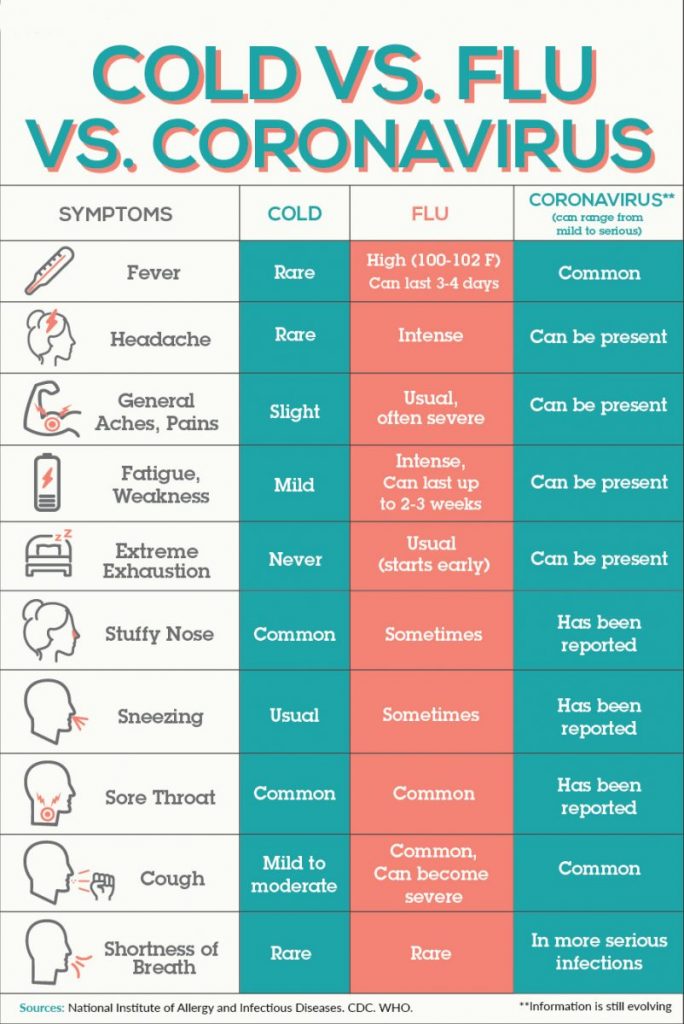 With fears of a “twindemic” in the United States this Fall, here’s a guide to understanding what’s making you feel terrible.

As influenza season approaches, some Americans, and especially parents, are worried that, if they or their children should become ill, it may not be easy to know which disease they have — the flu or COVID-19.

They are correct. Most symptoms of the two diseases are so similar that, short of a test — or two or three tests — it won’t be possible to know for sure. But there are some clues. (And it is possible to have both infections at the same time; some patients in China this year were found to have both.)

But first: get a flu shot.

Donalsonville Hospital’s infectious disease expert, Brenda Turner, RN, Infection Control commented, “According to the CDC, all eligible individuals should receive a flu vaccine before flu viruses begin spreading in your community, since it takes about two weeks after vaccination for protection to be developed. Georgia Department of Public Health recommends Influenza vaccination to be completed as soon as the vaccination is available.

If you catch the flu, experts say, having had the shot makes it much less likely that you will be hospitalized or die.

Because of the fears of a “twindemic,” flu shots were made in large numbers this year and distributed to pharmacies and doctors’ offices beginning in August, which is early. As of late last month, some doctors reported difficulty ordering as many as they want, but pharmacy chains say they are getting steady supplies.

Assess the difference between a cold and the flu. There are at least 100 viruses that can cause the common cold, but only four that cause seasonal flu. Many people who catch colds assume they have the flu, but experts consistently say the same thing about how to tell the difference: “Flu makes you feel as if you were hit by a truck.” The fever, aches and headaches of a bad case of influenza are generally worse than a case of respiratory syncytial virus, rhinovirus or other common cold viruses.

Everyone knows the symptoms of the flu: fever, headaches, body aches, sore throat, runny nose, stuffed sinuses, coughing and sneezing — and, for infants, ear infections. Some victims, especially children, get diarrhea or vomiting too.

In severe cases, the most common complication is pneumonia. The typical signs of a flu pneumonia are shortness of breath, especially when you exert yourself, and unusually rapid breathing — doctors typically look for that in children — and sometimes pain in the chest or back.

Knowing whether you have COVID-19 is much more complicated because there are so many different — and sometimes pretty wacky — symptoms, many of which echo those of the flu.

The most common symptoms are high fever, sometimes with chills, a dry cough and fatigue.

The one sign that really distinguishes the two infections is that many Covid-19 victims suddenly lose their sense of smell — not because they have a stuffy nose, but because they don’t register even strong odors like onions or coffee. Not all virus victims get anosmia, the formal name for loss of smell, but one study found that 87 percent did.

Less common symptoms include a sore throat, congestion, runny nose, vomiting, diarrhea, stomach pain and feeling somewhat out of breath when exerting yourself. Some victims have red or itchy eyes, and some get redness or blisters on their fingers or toes — so-called Covid toes, which resemble chilblains.

More dangerous symptoms — which mean you should get immediate medical attention — include serious breathing difficulty; pain or pressure in the chest; blue lips or blue face; confusion or incoherent answers to simple questions; and collapsing or losing consciousness.

Adding to the disease’s fearsome nature is that it can cause blood clots that lead to heart damage, brain damage and lung damage. And even some cases that appear mild or asymptomatic create signs of what doctors believe may be long-lasting heart damage.

Another unusual aspect of COVID is that people sometimes develop pneumonia without realizing how sick they are. Doctors are unsure why; one theory is that the air sacs in the lungs are damaged in a way that does not cause the buildup of carbon dioxide, which creates that “desperate for air” feeling.

In the end, no matter what your symptoms are, seek the advice of a health care provider for treatment and guidance.