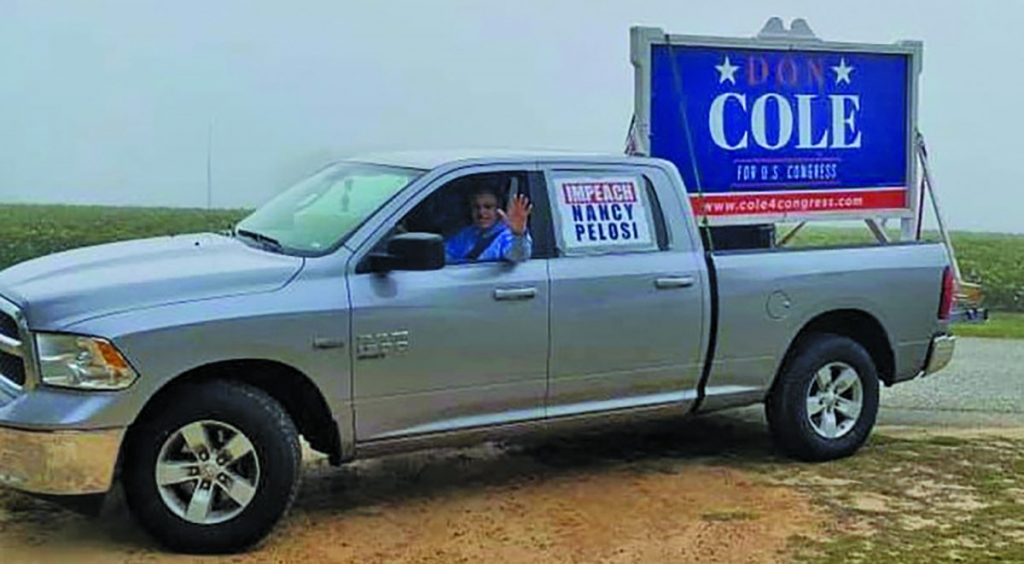 Republican Congressional Candidate Don Cole, a pastor, public administrator, consultant and former member of the Trump Administration, is canvassing the 2nd Congressional District on his “Waaaaay Past Time – Roll with Don Cole” tour of the district’s 29 counties. The tour will return to Seminole County this Saturday. Cole invites citizens to come meet him and share their concerns beginning at 10:30 a.m on Saturday, October 24, at 216 Cherry St, in downtown Donalsonville.

Cole’s rolling billboard, a 4×8 foot sign in the back of his pickup truck, has become a familiar site as he crisscrosses the 29 counties of the 2nd District.

Cole stated, “We had our first “Roll with Don Cole” tour last month and it was a huge success! One repeating theme we heard was that it was time for a change. It was past time. It was waaaaay past time!”

“After nearly 30 years of the same Democrat representing the District, little has changed for people’s lives. The only ones better off because of him being in Congress are Nancy Pelosi and the incumbent himself. He is a Pelosi puppet and takes voters for granted. It is waaaaay past time,” said Cole.

Cole’s priority is to build strong relationships with the Georgia Department of Economic Development, regional, and local development authorities across the district. “I will be a cheerleader for real economic development in the 2nd District. Georgia is the best place in the nation to do business and I will take a seat at the table to be a voice for the 2nd District.”

Agriculture is the number one economic engine in the 2nd District. Cole emphasized its importance to national security and the economy. “Agriculture forms the base of an equilateral triangle whose sides are Prosperity, Health and National Security. All are dependent on the other. If one fails, all fail so fails The United Sates.

Cole will also be addressing American liberty and the 2nd Amendment. For the first time, the NRA dropped their endorsement of Sanford Bishop and his rating plummeted to a near failing C and they awarded Don Cole an A rating. “Sellout Sanford sold out your Second Amendment rights. We can add that to the list of all the ways he is trampling over the voters of the 2nd District.”

Cole said that the people of the 2nd District share the same deep values of faith and family. “These are deeply held shared values that are deeper than the color of our skin. For example, I am 100% pro-life and Sanford Bishop is 0% with National Right to Life.  On the other hand, the group that kills unborn children and markets their body parts, Planned Parenthood, loves Bishop and gave him a 100% rating. That matches Pelosi’s values, but not the people of the 2nd.”

For more information about this tour, contact Brinson Hubbard, brinson@cole4congress.com 229-938-3969