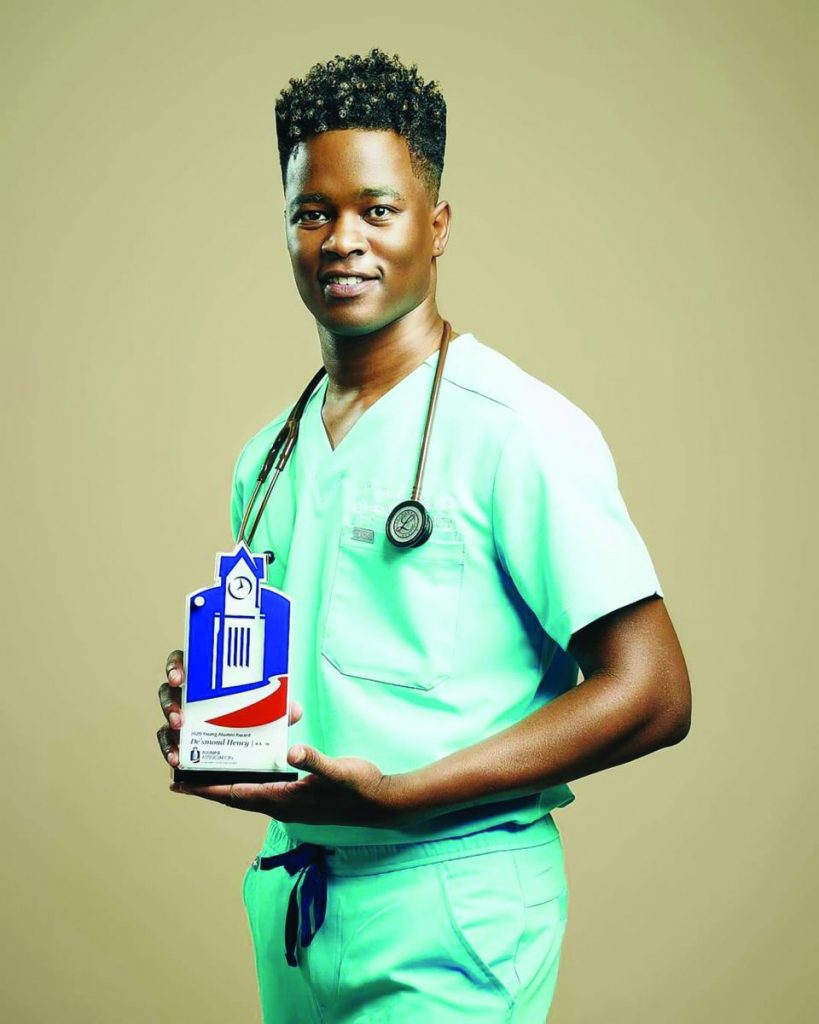 Seminole County’s Dr. De’smond Henry was presented with the Columbus State University  Young Alumni Award during the University’s 2020 Alumni Recognition Awards ceremony last week. The award is given to alumni who have graduated in the last 15 years in recognition of a commitment to excellence in post-collegiate life and a significant or ongoing commitment to extraordinary work, research, volunteerism or service to the  University.

Dr. Nikita Harris, University of Alabama Professor and former CSU Communications Professor, commented, “De’smond has become a life mentee. Our relationship of mentor/mentee grew and extended beyond the campus of Columbus State University. As a mentor who gets into the “weeds” of students’ lives. I had the privilege of seeing a young collegiate full of big dreams transform into a razor focus student on entering and successfully completing medical school. However, I am most proud of how Dr. Henry overcame barriers and obstacles along his journey to becoming a physician. It is in those struggles that he found immeasurable gifts. I believe it is those life gifts that will sustain and keep him on this path to becoming a great physician.”

“I want to express my gratitude to the CSU alumni association for selecting me for the young alumni award,” commented Henry.  “This is actually the second award that I’ve received from CSU since graduating in 2010 and I can’t begin to tell you how amazing it feels to have my accomplishments acknowledged by my alma mater. Again thank you CSU and thank you to my mentors and former CSU professors.”

Henry earned a Bachelor of Arts degree in Biology in 2010. During his time at CSU, Dr. Henry was a member of the Tri-Beta Biology Honor Society, Student Government Association, and was named Student Employee of the Year in 2010. Upon graduation from Columbus State, Dr. Henry attended medical school at Mercer University’s School of Medicine, graduating in 2015. From there, he completed his residency at Grady Hospital with Morehouse School of Medicine, where he served as the Chief Resident, specializing in Obstetrics and Gynecology. Since 2016, Dr. Henry has achieved many professional accomplishments including four research projects in conjunction with three institutions, published two articles in medical journals, and given ten presentations on various medical topics with a focus on women’s health. Most recently Dr. Henry received The Nelson McGhee Jr., MD, Ph.D. Administrative Chief Resident Award this year. After completing his residency in May 2020, Dr. Henry returned to his hometown of Donalsonville to work as an Obstetrician and Gynecologist at South-west Georgia Healthcare Clinics and Donalsonville Hospital.