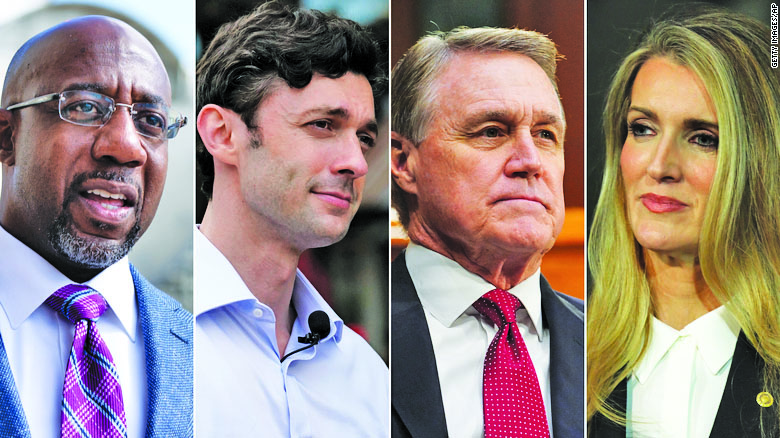 Editor’s note: This article was written and published before a winner in each Senate race was officially announced. Kelly Loeffler and David Perdue, Republican incumbent Senators, each lost their bids for re-election to Raphael Warnock and Jon Ossoff.

As of presstime on Wednesday, Rev. Raphael Warnock was poised to defeat Republican U.S. Sen. Kelly Loeffler in Tuesday’s runoff election, handing Democrats a Senate seat in Georgia for the first time in nearly 20 years.

Warnock’s co-campaigner, Democrat Jon Ossoff, also declared victory over Republican U.S. Sen. David Perdue early Wednesday with a slim 16,000-vote lead in an election that looks to shatter turnout records for Georgia runoffs with around four and a half million votes.

Should those results stand, Democrats will gain control of both chambers of Congress and the White House following President-elect Joe Biden’s win over President Donald Trump in the Nov. 3 general election.

Thousands of votes remained to be counted in heavily Democratic counties such as DeKalb, Fulton and Chatham. The outlook was enough for several news outlets including the Associated Press to call the race for Warnock as his lead grew to more than 53,000 votes overnight into early Wednesday.

Ossoff joined suit, claiming victory Wednesday morning after CNN projected he will win. The Associated Press has not yet called his race.

“I will give everything I’ve got to ensuring that Georgia’s interests are represented in the U.S. Senate,” Ossoff said in a video thanking supporters.

The Republican Senators have not conceded defeat so far. Loeffler told supporters around midnight she still sees “a path to victory,” while Perdue’s campaign issued an overnight message saying he “will be victorious” once all votes are counted in the “exceptionally close election.”

In Seminole County 58.23% or 3,507 out of the county’s 6,023 regular registered voters made the effort to vote early or on Election Day in the January 5th elections. Just as in the Presidential race back in November, Seminole County’s majority candidate preferences in the Senate races seemed to again be on the minority side in the statewide results.

With 99% of precincts reporting, the incumbent Republican was leading with 50.8% of the vote to 49.2% for Blackman, according to unofficial results.

A complete Seminole County vote breakdown for all three races can be found on this page.

The runoffs have been among the most consequential in Georgia history, dominating airwaves and political talk for the past two months with control of the Federal Government hanging in the balance.

More than $830 million was spent by the four campaigns and outside groups in both races, dwarfing previous fundraising records in American politics, according to the nonprofit Center for Responsive Politics. Celebrities and national politicians flocked to the state. President Trump and Biden each held rallies twice.

The campaigns themselves were grueling affairs as Perdue and Loeffler cast their Democratic opponents as big-government socialists while Ossoff and Warnock framed the Republican incumbents as self-serving wealthy elites.

All four campaigns combed the state for every vote they could find after the Nov. 3 election saw Georgia flip for a Democratic candidate for the first time in a Presidential contest since 1992, driven by strong gains in former Republican suburban strongholds like Gwinnett and Cobb counties.

Like the November election, vote-by-mail and early voting boosted turnout in the runoffs to record-breaking numbers as voters avoided long lines on Election Day due to the ongoing COVID-19 pandemic. By Tuesday, more than three million ballots had already been cast by mail and during the three-week early voting period.

Coronavirus loomed large in the runoffs amid long-delayed negotiations between Senate Republicans and House Democrats over a second round of economic relief, as each side accused the other of delaying passage of a nearly $1 trillion legislative package.

A relief bill finally pushed through Congress that handed Democrats ammunition to continue attacking the Republican Senators after President Trump trashed the bill, calling it a “disgrace” for including $600 stimulus checks instead of the $2,000 checks he wanted.

President Trump also sparked fears among Republican leaders with his relentless assault on Georgia’s election system since his November loss. They worried the President’s influence risked depressing voter turnout in conservative parts of the state where the President’s loyal followers leaned toward believing his unproven claims of election fraud.

Both Senators refused to acknowledge Biden’s win throughout the runoffs, with Loeffler going so far as to say she plans to join around a dozen other Senators in contesting Congress’ vote on Wednesday to ratify the Electoral College results. Democrats accused her and Perdue of all but treason.

“If we win these races, we can turn the page on the last four years,” Ossoff said outside an Atlanta polling place on Tuesday.

Loeffler, who fended off President Trump ally U.S. Rep. Doug Collins in a free-for-all Nov. 3 special election, dismissed concerns over the President’s influence ahead of Election Day, arguing Republican voters recognized her campaign and Perdue’s as a “firewall against socialism.”

“I’m proud of my campaign because we’ve shown Georgians the importance of this race, not just here in Georgia but to the entire country,” Loeffler said at a campaign stop Monday in Atlanta.

Loeffler, an Atlanta businesswoman, and Perdue, a former corporate executive from Sea Island, both faced allegations of insider trading in the pandemic’s early days. Though both insisted a Federal probe cleared them of wrongdoing, Ossoff and Warnock used the controversy to portray the wealthy Senators as out-of-touch with average Georgians.

“There are campaigns and there are movements,” Warnock said at a stop in Atlanta Tuesday. “And there is a sense in Georgia that so much is at stake.”

Perdue and Loeffler landed their own blows. Ossoff, who runs an investigative journalism company, was hit over a China-connected Hong Kong group’s purchase of a documentary his company made. Warnock, the senior pastor of Atlanta’s Ebenezer Baptist Church, faced attacks for past comments on police and charges of interfering in a child-abuse investigation that he called a misunderstanding.

“If we don’t all get out and vote … everything President Trump has done to make America great again is gone,” Perdue said in a video that played at a Trump rally Monday in Dalton.