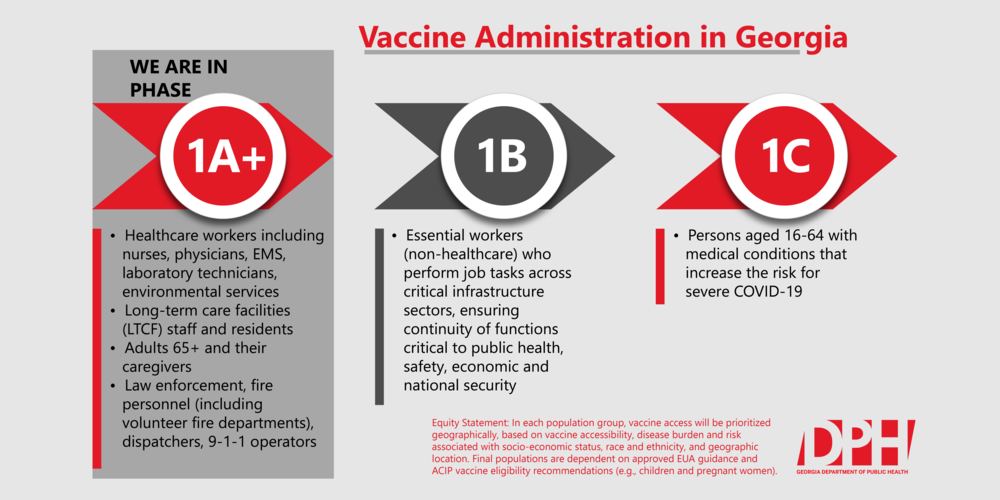 Local providers are struggling to administer COVID-19 vaccines in Georgia as health clinics have been swamped with requests for doses since Gov. Brian Kemp expanded eligibility to those 65-years and older.

The deluge of vaccine seekers came as the General Assembly grappled with the highly infectious virus on Tuesday. A top lawmaker in the Georgia Senate announced he tested positive just two days into the 2021 legislative session in Atlanta.

Georgia is currently being shipped around 120,000 doses of COVID-19 vaccines each week, with roughly one-third of that allotment being administered to nursing home residents and staff through a federal distribution program with CVS and Walgreens pharmacies.

That leaves state officials with around 80,000 doses weekly to divvy up, an amount far fewer than the 1.3 million people 65 and older and the state’s roughly 536,000 health-care workers who are first in line to receive the vaccine, Kemp said at a news conference Tuesday.

“There are simply more Georgians that want the vaccine than can get it today,” Kemp said.

Less than one-third of the nearly 700,000 vaccine doses shipped to Georgia as of late Monday have been administered, according to state Department of Public Health data. Kemp said he aims to have all nursing home staff and residents vaccinated by the end of the month.

Providers began vaccinating Georgians ages 65 and older on Tuesday, unleashing a wave of requests from vaccine hopefuls that flooded local health departments with tens of thousands of calls for appointments. Kemp stressed vaccines are only available to older Georgians where supplies are sufficient.

“Please know that we are working tirelessly to get our limited supply of vaccines to those who need it and who it would do the most good,” Kemp said.

As Kemp dug into the vaccine rollout, lawmakers at the Georgia Capitol were jolted on Tuesday after state Senate Majority Leader Mike Dugan, R-Carrollton, tested positive for COVID-19. Dugan spoke several times from the Senate floor and mingled with other lawmakers while masked on Monday, the first day of the legislative session.

State lawmakers are required to be tested twice per week during the session, though early signs point to gaps in the rules. Georgia House Speaker David Ralston, R-Blue Ridge, scolded House lawmakers on Tuesday after 74 of the chamber’s 180 members skirted mandatory testing the day before.

“If you don’t want to keep yourself safe, I’d like you to keep your neighbor safe and me safe and those around you safe,” Ralston said.

Georgia has logged more than 6,000 new positive COVID-19 cases daily over the past few days, continuing a spike in transmissions this Winter that saw the state record more than 10,000 new cases in a single day last week, by far the largest amount since the pandemic took root last March.

Along with tight vaccine supplies and high transmission rates, state officials are also dealing with some local providers who have started stockpiling vaccines for their patients in anticipation future shipments may not be enough to cover the two doses needed for full vaccination.

“If it takes me firing up my pickup truck and doing it myself, so be it,” Kemp said.

Toomey added officials are looking to overhaul how eligible Georgians schedule vaccine appointments as some counties have seen website glitches in recent days. Providers have also been lax in reporting vaccine data, complicating efforts to secure more shipments with the federal government poised to start shipping vaccines to states based on how quickly they’re being administered.

Toomey also said officials are pushing to open large-scale regional vaccination sites to both boost the speed of dose administration and prepare for giving vaccines to far more people once the general public becomes eligible in the coming months.

“The good news is that there’s a tremendous demand for the vaccine,” said Toomey, noting many health-care workers in rural parts of Georgia have declined to receive the vaccine. “We have a lot of providers but just not sufficient vaccine to give them at this time.”

More than 648,000 people in Georgia had tested positive for COVID-19 as of Tuesday afternoon, according to state data. The virus had killed 10,444 Georgians.