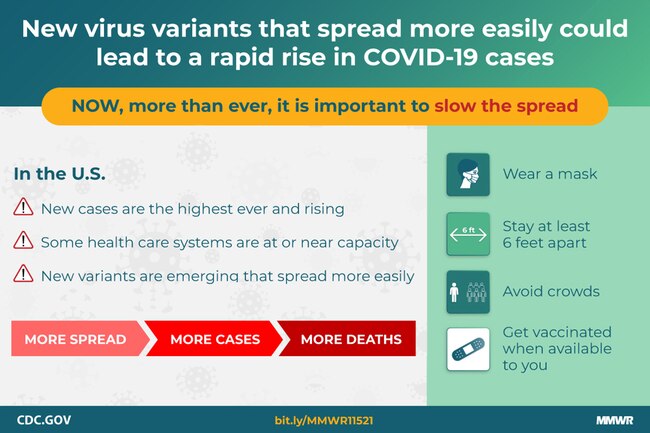 The Centers for Disease Control and Prevention (CDC) is urging Americans to double down on precautions to thwart the spread of the Coronavirus, as the new B.1.1.7 “super strain” takes hold in the U.S.

New CDC modeling shows the new strain could cause more than half of new infections in this country by March, even as the U.S. races to deploy vaccines

“It’s not necessarily what’s going to happen everywhere, but this is the kind of path that we expect to see,” said study author Michael Johansson, PhD, a member of the CDC’s COVID-19 Response Team.

The new strain has key gene changes to its spike protein that help the virus pass more easily from person to person. It is estimated to be about 50% more contagious than the main versions of the Coronavirus circulating now. It was first detected in the U.K. and has forced England, Ireland, and Wales into another round of tight lockdowns as patients overwhelm hospitals there.

So far, there are just 76 known cases in the U.S., representing less than 0.3% of all COVID cases here. But the strain is so contagious that these cases are expected to double each week until this version of the virus becomes the chief cause of new infections.

As this super strain takes hold, scientists fear it will cause devastating spikes in case counts and deaths. The surges will come as many hospitals are already operating past their breaking points, causing fatality rates to soar as patients who once might have survived fall prey to a shortage of resources to treat them, including a dearth of staff, equipment, and beds.

The CDC’s new modeling indicates the B.1.1.7 strain could account for a majority of COVID cases in the U.S. in March. In a “what if” scenario, the modeling shows total COVID cases surging again in late April, and reaching a peak of more than 200,000 cases a day if no one gets vaccinated.

Of course, vaccines are being shipped to states now, making that worst-case scenario unlikely.

Vaccination of at least one million people in the U.S. each day wouldn’t stop the spread entirely, but it should cut the number of new daily cases at the peak by half — from an estimated 200,000 to 100,000.

That pace of vaccination has not yet been achieved in the U.S. As of Jan. 14, CDC data showed the U.S. had not yet given 10 million doses, fewer than half the doses that were expected to be administered by the end of last year.

The CDC’s modeling also showed that vaccination was most effective when paired with stricter adherence to measures that stop the spread of the virus, such as hand-washing, wearing masks, and social distancing. If the public was more aggressive in following those rules as the U.S. ramps up its vaccination campaign, it could slash the expected peak by more than two-thirds.

“We really understand that people are tired, and for some it’s getting harder and harder to social distance and wear their masks, but we have to do what we can now,” Johansson says. “We’re far from being out of the woods.”