UPDATE-  The at-large suspect, Troy Phillips, is now in custody. No additional officers were harmed in his aprehension. 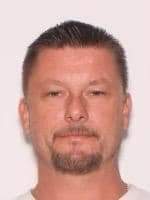 Both suspects, Brad Phillips and Troy Phillips now in custody and charged with Aggravated Assault on a Peace Officer.

Preliminary information indicates that a Seminole County deputy was attempting to conduct a traffic stop on two suspects, one later identified as Troy Arthur Phillips, driving in a white 2500 Chevrolet pickup truck with a Florida tag for reckless driving.  The men refused to stop and a chase ensued.  A second deputy joined the pursuit and the suspects began to fire a weapon from the truck in the direction of Seminole County deputies.  Seminole County deputies returned fire.

The deputy was taken to a local hospital for treatment and surgery.  He is listed in critical condition.

The suspects fled in their truck and wrecked a short time later in a wooded area.  A Georgia State Patrol helicopter and crew responded to the area of the wrecked truck.  One of the two suspects, identified as Brad Phillips, age 41, was taken into custody without further incident.  Brad Phillips has been charged with aggravated assault on a Peace Officer.

Troy Phillips remained at large until Sunday afternoon, February 28. He was apprehended without no additional harm to law officials after an active manhunt by multiple local, state, and federal law enforcement officers.  Troy Phillips has also been charged with Aggravated Assault on a Peace Officer.

This continues to be an active and ongoing investigation.