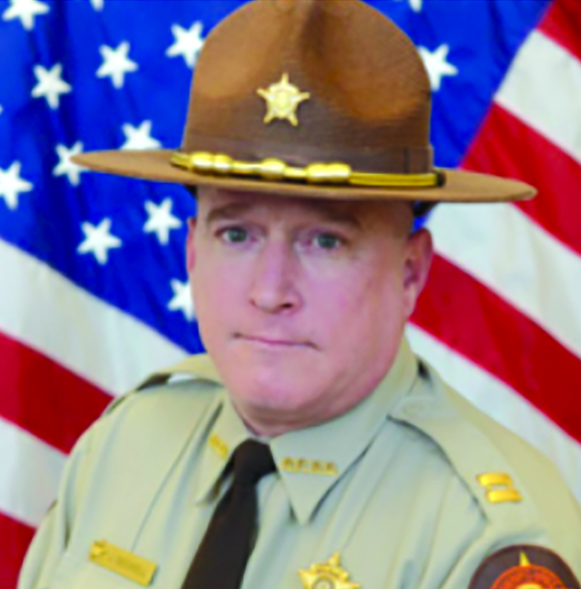 At the request of Decatur County Sheriff’s Office, the funeral service for Capt. Justin Bedwell at 11:00 a.m. on Thursday, March 4 will be held at Centennial Field in Bainbridge with Rev. Stephen Webb and Rev. John Thomas officiating. Due to the COVID-19 pandemic, those attending are asked to maintain the recommended safe social distancing of six feet and/or wear protective masks in accordance with the State of Georgia guidelines.

Online visitors may sign the guest register at www.iveyfuneral.com

A blue and black fog fell over Seminole and Decatur counties on Monday, March 1 when Decatur County Sheriff Officer Capt. Justin Bedwell succumbed to injuries that were sustained in the line of duty, Saturday, February 27, 2021 in Brinson, GA, while assisting Seminole County Sheriff’s officers in a high-speed chase where shots had been fired at Sheriff’s Deputies.

Bedwell, a 19-year veteran of the Decatur County Sheriff’s Office, was a Patrol Commander, Training Officer and a highly valued member of the Command Staff.

“When I knew he was on duty, I knew everything was fine,” commented Decatur County Sheriff Wiley Griffin. “He was a fantastic shift Sergeant, Lieutenant and now Captain.” Bedwell was named Captain posthumously on Monday afternoon.

Sheriff Elliott commented, “I would also like to say thank you to all of the many local, state and federal law enforcement agencies from all over Georgia, Florida and Alabama that sent officers and resources or called and offered assistance in the capture of the suspects responsible for the death of Capt. Bedwell and the injury of Seminole County Deputy Garrett Wooten. Decatur County Sheriff Wiley Griffin and his staff did an outstanding job coordinating the search for the suspects and taking care of the needs of all the many officers on the scene. I can not express enough thanks to all these brave, dedicated and professional men and women for what they did and what they do every day for the citizens of all our communities.”

Georgia Governor Brian Kemp released the following statement on Bedwell’s death. “On behalf of all Georgians, the Kemp Family sends our heartfelt prayers to Capt. Bedwell’s family, loved ones, and fellow officers in light of this heartbreaking news,” says Kemp. “His heroic sacrifice and dedicated service will not be forgotten.”

The Governor ordered that the flag of the United States and the flag of the State of Georgia be flown at half-staff on the State Capitol  building and in Decatur and Seminole counties on Thursday, March 4, the day of Capt. Bedwell’s interment.

Bedwell began his career in law enforcement when he joined the Decatur County Sheriff’s Office on December 5, 2001 and was sent to the ABAC Police Academy. There, he graduated and returned as a certified deputy.

According to Bedwell’s mother, Georgia, “He had wanted to be an police officer since he was five-years old.” Bedwell followed his dream of becoming an officer and continued to train and educate other officers along the way.

In 2015, he began training sex offender registration coordinators for other counties, along with DCSO employees. He was a primary field training officer (FTO) and trained many of the younger deputies employed now in Decatur County.

“He liked to help people, he even wanted to go to CHAMPS (Choosing Healthy Activities and Methods Promoting Safety) School and teach kids,” Sheriff Griffin said.

Bedwell’s natural dedication to helping others was recognized in November 2013 by Governor Nathan Deal when he received a Commendation. The Commendation stated that “Justin Bedwell of the Decatur County Sheriff’s Office is an outstanding member of the public safety community whose dedication to service embodies the very best of men and women in uniform.”

“Bedwell went above and beyond what was required or asked of him,” the Commendation reads. “Justin Bedwell has set an exceptional example for others in his profession and throughout the state through his devotion to fulfilling the needs of those he serves.”

A donation account in the name of Katherine Bedwell has been set up at the First National Bank of Decatur County. Lt. Brandon Draper and Decatur County Clerk of Courts Cecilia Willis has also set up a GoFundMe account at https://www.gofundme.com/f/decatur-county-sheriff-deputy-so9?utm_campaign=p_lico+share-sheet&utm_medium=copy_link&utm_source=customer