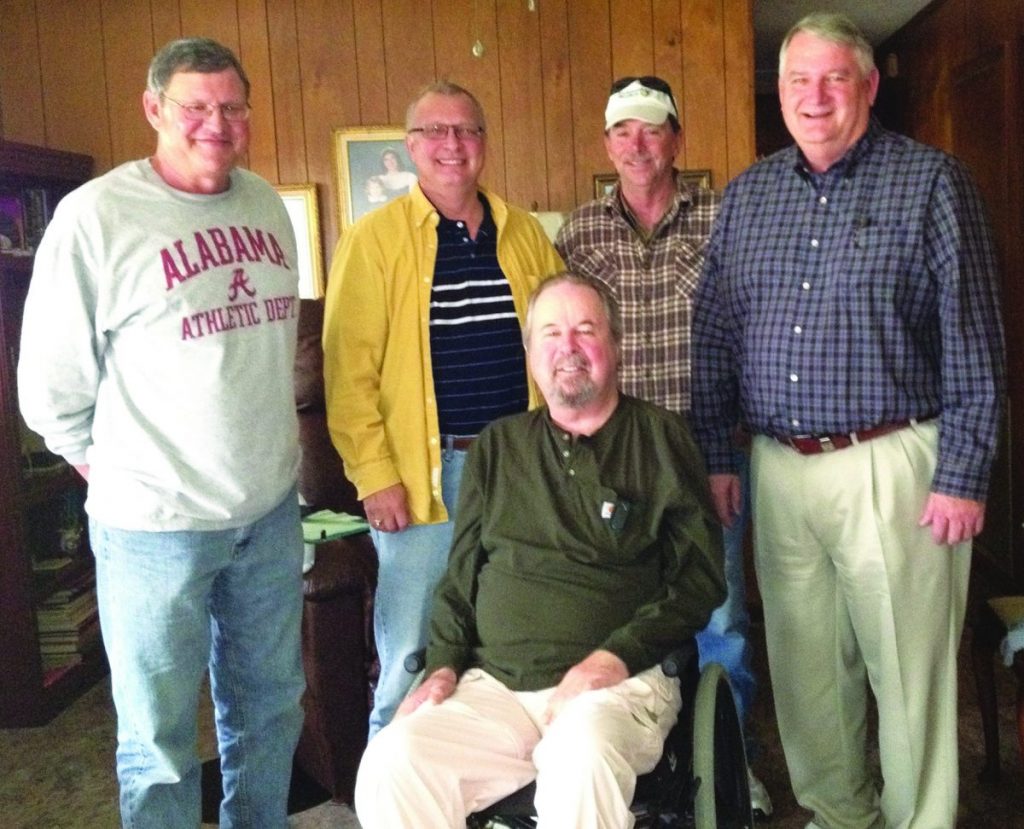 You must pass through time to understand friendship.  In my life, I have had many types of friends.  There were those from my childhood, then high school and college.  I had friends from Alabama before I spent 40 plus years in Georgia.  In two years since I have retired, I have made new friends in Auburn.

My first friends came from Cottonwood, Alabama, the town where I grew up.  I only went to school there through the sixth grade.  Although I finished school in Dothan, Cottonwood was the town where I was raised.  It is where I played Summer baseball and worked in the watermelon fields and at the peanut mill.

We all know how the passage of our time removes us from our friends.  In the case of my early friends, we moved on to different high schools.  Some went to college and some moved directly to a career.  I moved to Georgia and the old connections became more thin.  Only an occasional random crossing of our paths kept me connected with these early friends at all.

I received a call in February of 2012 from one of my closest friends from those childhood days, Jimmy Hughes.  He was one of those kids that always worked to keep the connections alive.  Jimmy called to tell me that another friend, Keith Granger, had cancer.  He wanted me to come over to Cottonwood and meet with a couple of our friends from those days and reconnect.

We met at Buddy Henry’s house in Cottonwood. Keith could not be with us, as he was at MD Anderson Cancer Clinic in Texas, but he joined us on a phone call.  Buddy had an advanced case of ALS, but also had the most amazing spirit of anyone I have ever known.  I had not seen him in years, but my visit with him lifted my spirit in the most unexpected way.  He told me to shake his toe.  That was the only limb or appendage he could move.  He put me at ease instantly and it as if we were kids again.

Keith and I went to camp together in Utah the Summer after our eighth grade even though we were in different schools.  It was the first plane trip either of us had ever taken.  Jimmy and I stayed in touch during college but drifted apart after marriage and careers.  Jimmy and Keith both visited many times at Compass Lake, even after I had left to attend another school.

Steve Smith was the next person to walk into the house that afternoon.  He was a kind and gentle soul.  I visited his house out on their farm as a kid.  We kept in touch the least, but the meeting that afternoon at Buddy’s house allowed us to reconnect.

Phillip Newman was the final attendee at the impromptu reunion.  We lived close to each other in the small town and played all the games young kids played back then.  He was a good boy then and a better man now.

This past week I received news that Steve Smith, a retired Captain in the Dothan Fire Department who served for 35 years, had joined my other friends in heaven.  Steve was 67 years old.

That leaves Phillip Newman and me as the two survivors of this special reunion held nine years ago.   This meeting did not just reconnect me with these five boys/men, but also allowed me to reconnect with numerous other classmates from Cottonwood Elementary School.  It has been a lifeline to my old hometown and a gift that I will always treasure.

As I reflect on those boyhood memories I am struck by some common threads.  We were all blessed with long marriages.  We all had children and grandchildren who continue to share the memories of these childhood friends.

There was something special about growing up in a small rural town.  I cannot imagine having the opportunity to write about my elementary school classmates in most other settings.  It is not just these six boys that enjoyed these early friendships, but others, many others that I could also write about.

I have been blessed with so many friends over my life.  The seeds of a good friendship were planted in my earliest years.  Thanks to Jimmy, those seeds blossomed yet again, before it was too late.

Keith.  Jimmy.  Buddy.  Steve.  They were some of the earliest of my friends.  They still hold a special place in my heart.  Rest in peace, guys.  I am sure Phillip agrees with me when I say y’all were the best.