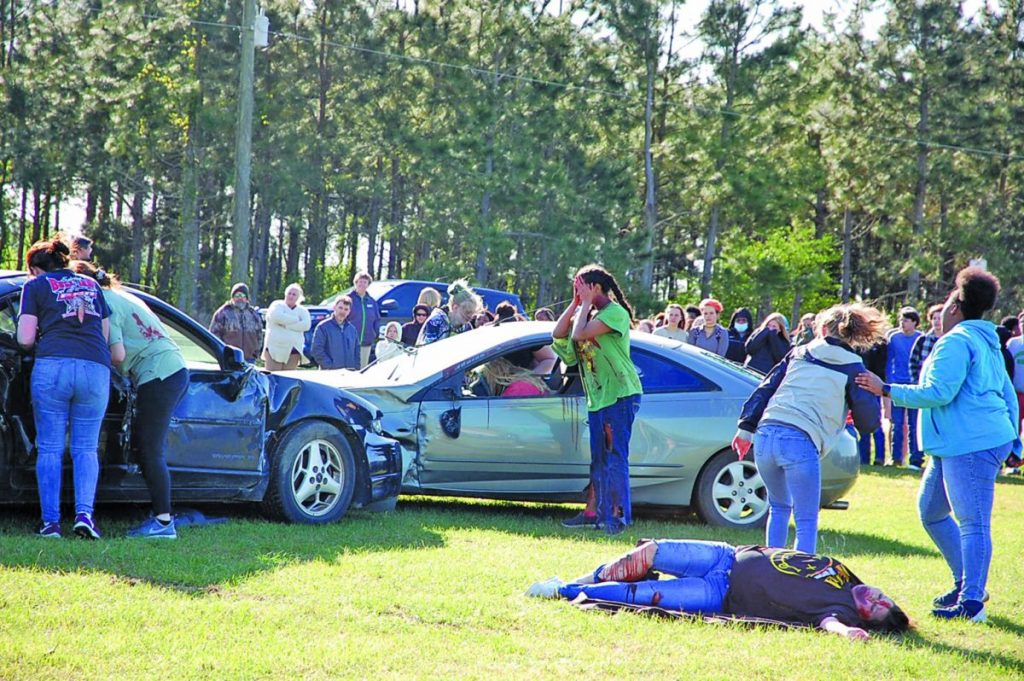 Georgia State Trooper Brian Palmer spoke with high school students about the dangers of driving under the influence and gave several examples of the negative impacts that decision can have on others.  Students were then escorted to the front of the building where a mock accident scene was set up with students from the Drama department acting as victims in the scene of an accident.  Some students were “driving under the influence” while others were sober.  A mock  911 call was made and first responders arrived and reacted to the scene they found.

Students gathered around the flag pole and watched first responders use the Jaws of Life to cut the roof off a grey sedan to extract one of their classmates, Arionna Soto, a student actor among several from the school’s drama club asked to participate.

Nearby, another student actor, Breanna Fletcher, cried as she performed chest compressions to try to “save” the life of a friend who had been thrown out of the car and was lying on the ground in a pool of stage blood. When a police officer arrived to check her pulse, he announced on his police radio she was dead, followed by a firefighter placing a white sheet over her body.

Meanwhile, paramedics loaded another student who had been pulled from the mangled car into an Life Flight helicopter to be transported to the hospital.

The scene depicted the aftermath of a distracted driver who had crashed her car into another car full of students, leading to multiple injuries, three fatalities and an arrest.

The scenario-based exercise was a chance for police, firefighters, medical staff and paramedics to practice how they’d handle the situation.

Seminole High Senior Breanna Fletcher, who led the student involvement aspect of the demonstration, said she sees distracted driving occur “all the time” among her friends and when she’s driving on the street.

“It’s something that needs to be addressed, and it’s not always talked about,” she said. “One thing that we wanted to make clear is that it impacts everyone.”

Fletcher, who was covered in stage blood, said it was important to have a death in each of the vehicles in the mock crash, because “it’s more impactful” for young people to realize that distracted driving can kill a passenger in another car or even one of their own passengers.

“It’s just second nature to pull out your phone to answer a text at a stoplight or answer a phone call. Even that split-second of a distraction can have terrible repercussions,” she said.

The most sobering moment was seeing friends react to their dead friend. Real tears flowed, as their friends were carried off into emergency vehicles.

Simple things like calling a sober parent or friend or wearing a seat belt can prevent officers from having to deliver devastating news to parents of young people.

“We hate to see that happen,” School Officer Jeffery Lawson said. “We think that these statistics are 100 percent preventable. If we can take events like this to educate our youth, they can see that there are real consequences to the choices we all make.”

“Bringing in multiple agencies for the scenario helped add realness to the exercise,” he said.

Loss of life is not the only serious consequence, Drama Club Coach Maribeth Burke noted, but also “loss of life related to the loss of freedoms” that can come from the major legal consequences of distracted driving. Bottom line, “it only takes a second to become a statistic”.

An event organizer commented, “We appreciate everyone that responded and was a part of this drill.  Special thanks to SRO Lawson for helping organize both events from this week.”