Editor’s note: To express appreciation for their service, the Donalsonville News begins this week a series of salute and thank you articles to shine the spotlight on Seminole County men and women currently serving in the military. If you would like to be featured email David Maxwell at david@donalsonvillenews.com 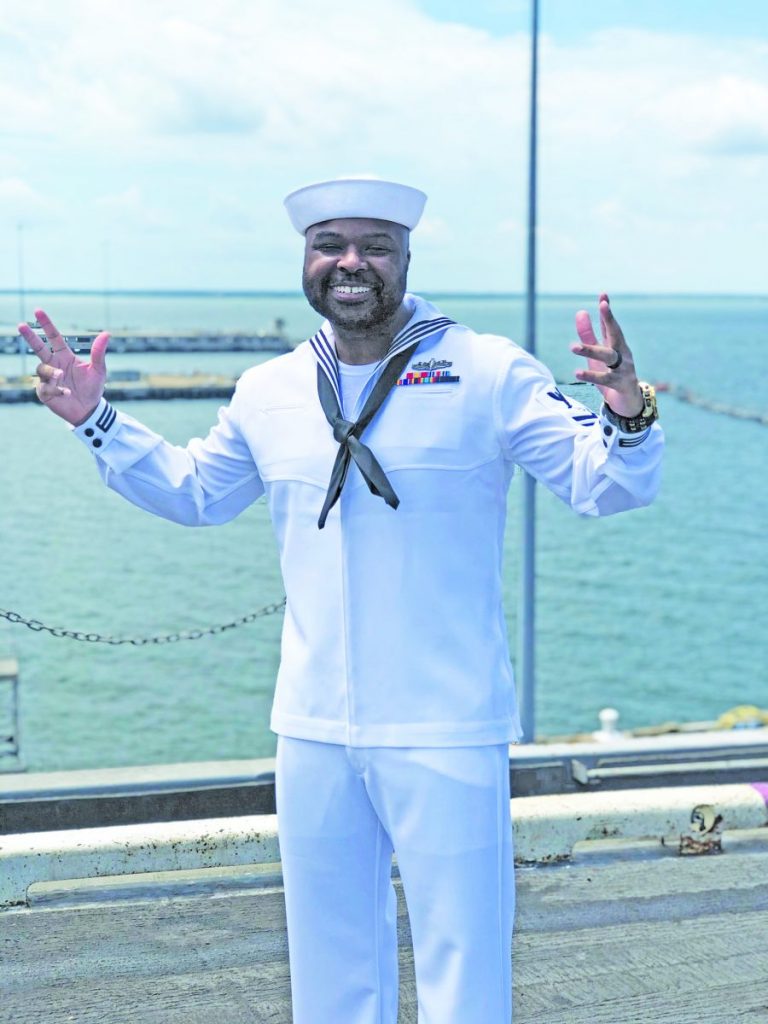 Seminole County’s Andre L. Shannon is a Navy Operation Specialist, attached to Carrier Nuclear Vessel, USS Dwight D. Eisenhower. Son of Debra Greene of Donalsonville, his ship houses over fifty aircraft on board, and his job is to monitor the radars to ensure that all aircraft are labeled correctly and to identify foreign aircraft, and inform those pilots that they are operating near a US Navy Vessel.

Shannon said deployment in 2020 was rough due to the COVID-19 outbreak. “We were not allowed to stop in any ports, so unfortunately we broke a carrier record for most days at sea without ports, 206 days. However, from the ship we saw Egypt, the Rock of Gibraltar, and we travelled to the equator for the Shellback Ceremony.” Deployment  this year is off to a better start, he added. “We’ve stopped in Greece and the country of Oman. We’ve been carrying out the mission safely so far, which is always good news. My daily routine consists of work, working out, writing, and reading.”

He was born in upstate New York, grew up into a man in Miami, Florida; but was raised with love in Donalsonville, by his mother and his grandparents, Sara and Hezekiah Greene.

He made the VSU football roster in 2004, and played until he tore a ligament in his ankle for the second, time ending his football career.

While attending VSU  he volunteered his time at Big Brothers and Big Sisters and the Boys and Girls Club. In 2007 he graduated from VSU with a B.S. in Psychology and Counseling. In 2012, he graduated with a MPA Masters of Public Administration degree from the University of Phoenix, and he is currently only five classes short from obtaining his PhD in Nonprofit Leadership and Management.

On joining the military Shannon commented, “Honestly, never in a million years did I think that I would join the military. I never forgot my classmate and teammate, Zach Alday, who was killed on active military duty, and how that made me feel. I remember calling my mom from college, crying on the phone the day I found out. But I never lived life in fear.”

The underlying reason why Shannon joined the Navy was due to his love for his grandparents and his mother. “My grandparents have always been proud of me no matter what. My mom encountered an unfortunate situation in reference to the home that my brother, Anthony Spikes, and I grew up in. So I quit my counseling job and joined the Navy because I knew that would put me in a position to buy the house so she wouldn’t have to worry about anything. My grand- father has given me every tool I need in order to show me how to love my family,” Shannon added.

Whenever the Donalsonville News reached out to Shannon to do this interview, the only thing that crossed his mind was how he could use this platform to inspire at least one person. Shannon’s  high school teacher, the late Samuel Beachem, inspired him to do something positive with his life, and Shannon has always  hoped that someday he can inspire someone to follow in his footsteps and do that as well.

To anyone who feels hopeless, Shannon offered these comments, “I would like to say that Donalsonville may be your current living situation, but you control your destination. The key is to keep going and to believe in you.  If you want to strive in Donalsonville that’s fine, but if you want to strive outside of Donalsonville that’s fine too, where you strive doesn’t define you. Even when family, friends, or foes do not see your vision. Use negative energy to fuel your ambition.”

Shannon also has written a children’s book that will be released in 2022 telling a story about the importance of feeding a kid’s self-esteem.

In conclusion Shannon added,  “I thank anyone who ever helped me in any way. I thank my wife Latoya, for always being there for me and for believing in me. I also would like to thank my brother; the Shannons, the Greenes, Tim and Beverly Thomas, Uncle Moses and Aunt Laverne James, Mr. and Mrs. Percy Leggett, Wayne and Valerie Bryant, Mr. and Mrs. Priestly, Mr. and Mrs. Sam Brown,  and Mr. and Mrs. Wright. Uncle Tim Thomas, and my big cousins Tyrone Ditzel, Les Bullard, Calvis Griggly, and Naijae Parham for sound advice, Russell Harris and the late Samuel Beachem, R.I.P.

Thank you to everyone who believed in me, supported me, and treated me like an equal. Like Frank Sinatra said, “I did it my way.”

I proudly serve my country, and love and miss my family.