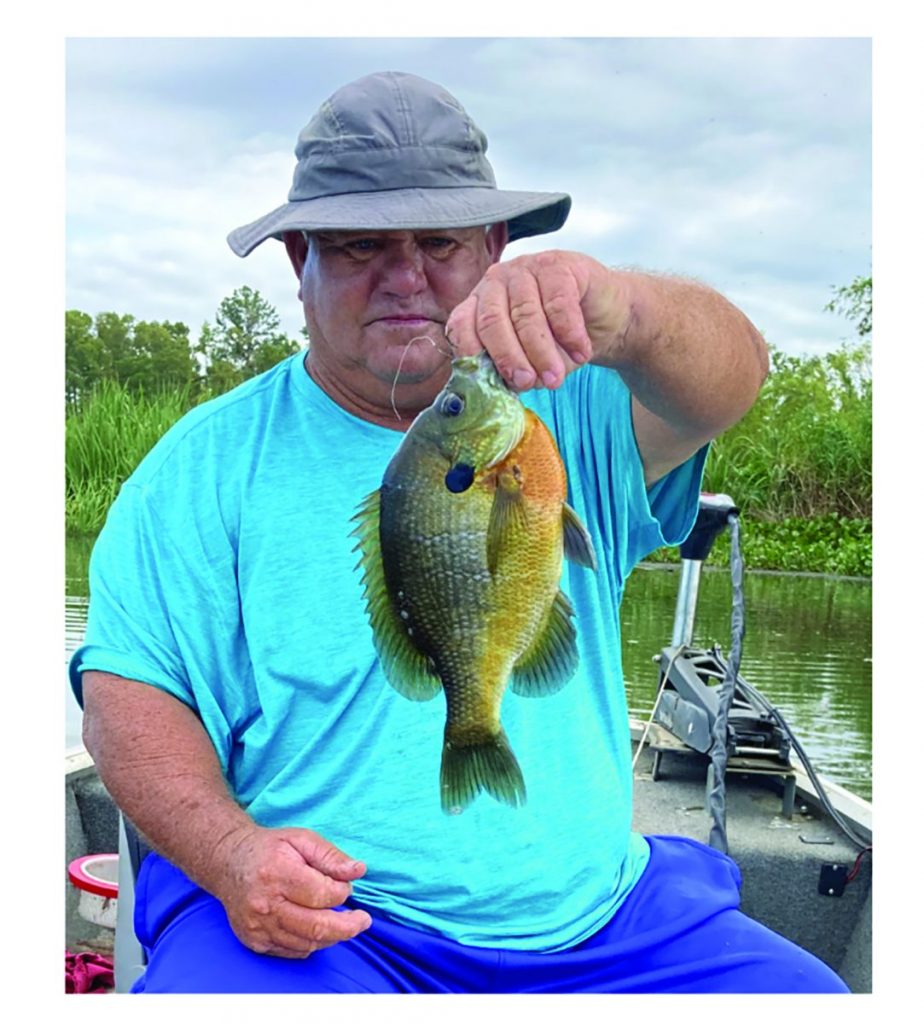 All Wendell Mathis wanted to do in his 45 years of fishing Lake Seminole was catch a bream that weighed at least a pound. Well, at almost 69 years of age, the angler from Colquitt sealed the deal on Aug. 24 with a Bluegill Bream that weighed 1-lb., 7.68-ozs. – a new Georgia Outdoor News (GON) state record catch.

“I put in at Cummings Landing and went out toward the river on the Flint side and went in front of the Indian Mounds and bared right,” said Wendell. “There’s a big old sunken boat that has been out there since (Hurricane) Michael came through. You can’t miss it. It’s in between the Flint and the Chattahoochee. If I were to turn around, I can look straight toward the dam.”

Wendell said the sunken boat is up against the bank and a good portion of it is out of water and visible.

“We have been fishing there three weeks and the willowflies have lasted longer this year than I have ever known them to last,” said Wendell.

Wendell was fishing with Randy Weathersby, a good friend recovering from stage four bladder cancer surgery that has been enjoying his recent trips to Lake Seminole. The event that would unfold on that Tuesday morning would bring a great deal of enjoyment to Randy.

“I try to carry him up there once a week,” said Wendell.

The two friends caught a lot of good eating-size bream at the sunken boat and then made a run over to fish an area of willowfiles at the Indian Mounds.

“They were smaller fish, so we decided to come back (to the sunken boat),” said Wendell.

The very first fish Wendell caught when returning to the sunken boat was the record Bluegill.

“I thought it was a catfish. If there was any hydrilla or lilly pads, I would not have landed him,” said Wendell.

In fact, Randy was offering the net and Wendell was just about to tell him not to worry about it because he believed it was a catfish that wouldn’t go over two pounds.

“But when we saw the red belly, Randy grabbed the net, got it under him, and we got him in the boat.”

Here’s where a little bit of Seminole luck came into play.

“I went to pick him up and my line broke. In the picture, you can still see the broke line in the bream’s mouth. Straight luck! It was just meant to be I reckon,” said Wendell.

The record-class fish bit a cricket fished on the end of a 14-foot Blaze graphite pole made by Hicks. He was using clear, 8-lb. test line and a No. 7 hook. The lake was full or a little over, and Wendell guesses the fish bit in 3 1/2 feet of water. “Normally if it’s not full, the fish are spooky there because it’s so shallow,” said Wendell. “The last few times we have been, Seminole has been in good shape or over full.

“I normally fish on the bottom unless there’s so much hydrilla and I have to fish up above it. That area has a good hard bottom. It’s one of the few spots left on that lake that hydrilla hasn’t taken.”

The two anglers didn’t fish much longer after putting the big Bluegill in the boat.

“I normally fish alone or with my wife Angel, so thank goodness Randy was with me because he has an updated phone for pictures. I have an old flip phone. He was more excited about the fish than I was,” said Wendell.

On a pair of hand-held scales at the lake, the fish weighed 1.7 pounds. It wasn’t until the next morning when Wendell was able to get to Jones Meat Company in Climax where it weighed officially 1.48 pounds, or 1-lb., 7.68-ozs. It beat the old record of 1-lb., 2.4-ozs. set back in 2011 by William Hornsby.

Requirements for  a State Record Fish

• Fish must be caught legally by rod and reel in a manner consistent with state game and fish regulations.

• Catch must be weighed on accurate Georgia Department of Agriocultire certified scales with at least two witnesses present, who must be willing to provide their names and phone numbers so they can be contacted to verify the weighing of the fish.

• Witnesses to the weighing must be at least 18 years old, and they must not be members of the angler’s immediate family nor have a close personal relationship with the angler.

• Catch must be positively identified by qualified DNR personnel.

GON’s records are compiled and maintained by GON, to be awarded at GON’s discretion. Additional steps may be required for record consideration.