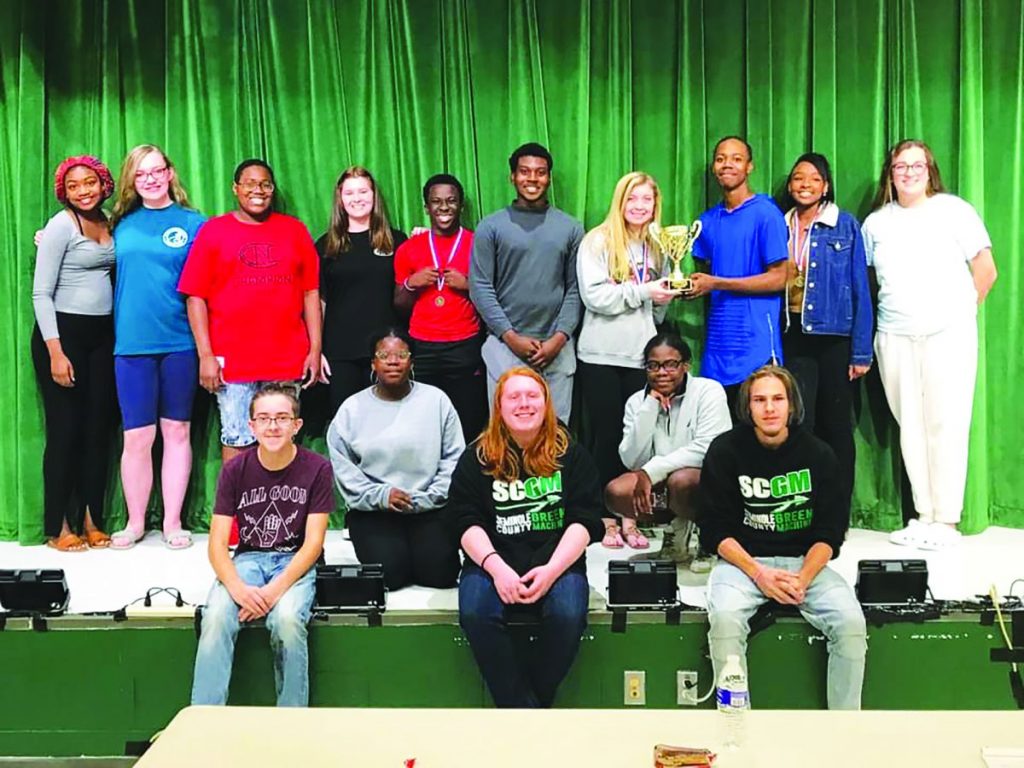 Matinee performance set for Sunday, November 7 in the SCMHS Cafeteria

The “One Act” Team at Seminole County Middle High School won first place in its region competition last Saturday at Seminole High School edging out Baker County and and Pataula Charter.  Anchored by JoBeth Kelly and Brian (B.B.) Sims who play agents Gabrielle and Tom, the students performed Don Zolidis’s “The NSA’s Guide to Winning Friends and Influencing People: Or What We’ve Learned from Watching You.” Seminole One Act coach and director Ben Sasser utilized an eleven person cast to play twenty-six different characters in the eight short and diverse vignettes in this production.

From role playing in the World of Warcraft to a meltdown during a Girl Scouts Award ceremony to students spying on other students through their home computers, this play pokes fun at the idea of continual government surveillance in our private lives.  The main character even describes “cameras in our shower heads” as a way to keep tabs on private citizens.  While some characters benefit, most realize the absurd overreach of such a system through the script’s humorous and lively exchanges.  Along with the NSA’s new recruit, the audience finds their way through the crisis of conscience and decides against the overreaching methods displayed in each scene.

Seminole County schools and the One Act Team request your support and attendance at the matinee show for the community on Sunday, November 7th at 3:00 p.m. in the high school cafeteria.  Tickets are $10 and available at the door.  Show your support and stop by after Sunday lunch, enjoy and help Seminole County’s  dedicated, hard-working students take this show to the State Competition in Warner Robbins.