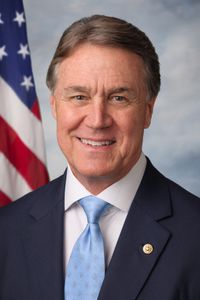 Perdue is an ally of former President Donald Trump, who has been urging him for months to take on Kemp.

The Governor angered Trump when he refused to help him overturn the results of last year’s presidential election in Georgia.

Democrat Joe Biden carried the Peach State by fewer than 12,000 votes, the first Democratic presidential candidate to carry the state since Bill Clinton in 1992.

The primary contest between Kemp and Perdue is sure to aggravate divisions already apparent inside Georgia’s Republican Party between Trump loyalists and those who want the GOP to put last year’s election behind and move forward.

Perdue’s announcement came less than a week after Democrat Stacey Abrams, who lost to Kemp in 2018 by a narrow margin, formally entered the gubernatorial race again.

In a video released Monday, Perdue laid the blame for Republican divisiveness squarely on Kemp.

“Think about how different it would be today if Kemp had fought Abrams first instead of fighting Trump,” Perdue said. “Kemp caved before the election, and the country is paying the price today.”

Perdue finished first in last year’s general election but fell short of the 50%-plus-one margin needed to win reelection to a second term. He then lost a runoff to Democrat Jon Ossoff last January, which led to the Democrats capturing a 50-50 split in the Senate, effectively a majority since Democratic Vice President Kamala Harris can break tie votes.

“I’m running for Governor to make sure Stacey Abrams is never Governor of Georgia,” Perdue said. “Make no mistake, Abrams will smile, lie and cheat to transform Georgia into her radical vision of a state that would look more like California and New York.”

Democrats responded to Perdue’s candidacy by labeling him a “failed” Senator.

“Republicans like Brian Kemp and David Perdue have failed Georgians at every level of leadership,” said Scott Hogan, executive director of the Democratic Party of Georgia.

“No matter who emerges from Republicans’ messy, race-to-the-right gubernatorial primary, voters know that Democrats are the only ones who will deliver on the issues Georgians care about, like recovering from COVID-19 and expanding access to health care.”