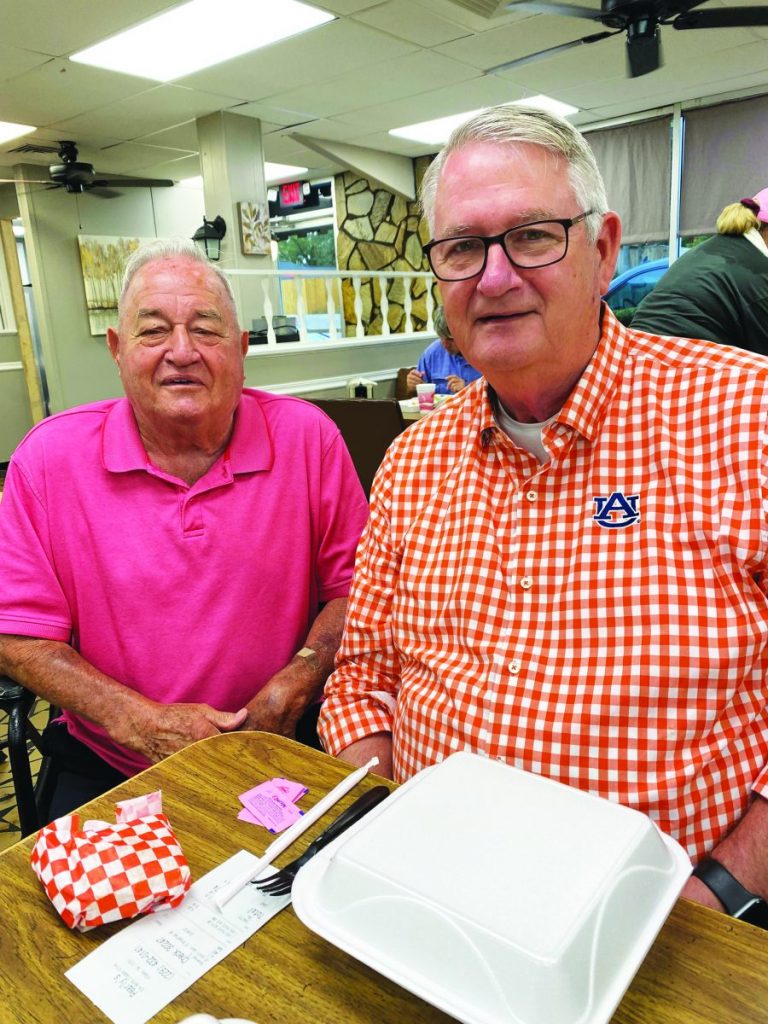 On our way down to Tampa for the SEC Basketball Tournament, Mary Lou and I passed through Albany around lunchtime.  “Where do you want to eat?” is the usual discussion we have as we are traveling.  I suggested “Pearly’s” and she immediately agreed.

We pulled into the parking lot on North Slappey Boulevard 45 minutes after noon.  It was packed.   There was a double drive-thru with cars lined up in both lanes all the way around the building.  We decided to go inside, with no knowledge that Pearly’s had just re-opened their dining room only two days earlier.

As we walked through the double line of cars, I saw a gentleman sitting in a wheelchair right at the drive thru window and next to the entrance.  I recognized my old friend instantly, though I was not sure he would know me.  A quick handshake and the instant recognition of who we were made us both feel good.

Old friends don’t have to see each other regularly to remember their connections.  Pearly and I spoke for several minutes at the drive thru before going inside to order.  Then he rolled his wheelchair up to our table after our food arrived.  Years had passed since we last visited, but our conversation picked up like it was only yesterday.

My ties to “Pearly’s” go beyond my love of their food.   Cary Gates, also known as “Pearly,” was an early Burger Chef franchisee.  Hardee’s later bought out Burger Chef and Pearly made the conversion.  That was just before I started my career as a Hardee’s franchisee.

Pearly and I initially owned restaurants 60 miles apart, though many years later just a few blocks separated us.  We became friends and shared the successes and challenges of operating fast-food restaurants.  We often discussed our common thoughts about the direction and future of the brand, and eventually took our businesses down dramatically different paths.

At some point, Pearly began to provide products that were outside the strict structure of the franchise brand.  He cooked fried eggs.   He provided link sausages and toast.  He even served grits, though they were not a corporate approved menu item at the time.

The Ivory Tower that often controls many corporate entities did not care for the entrepreneurial spirit of Pearly Gates.  “It is not approved” was the usual corporate response.  “It is what my customers want” was the retort of the rebellious franchisee.

At some point, Pearly showed Hardee’s the exit gate.  This was not the first time that Hardee’s parted ways with a renegade franchisee.  It turned out to be on of the best decisions of Pearly’s life.

Pearly got into the fast-food business in 1962.  I was only in the second grade.  Our age difference was not a barrier for our shared love for the restaurant business.  We took dramatically different paths after we became friends, but we never lost our friendship that took root when we first met.

In 1990, Pearly had one restaurant.  I had a half dozen.  When we sold our company in 2018, we had 38 restaurants.  Pearly still has only one restaurant, but what a restaurant it is.  I had retired by the time of Covid and the subsequent labor shortages.  Pearly adjusted as he always does.  He closed his dining room, doubled his drive thru and made more money than ever.

After Pearly could no longer work, he pulled his wheelchair up to the drive thru and continued to greet every single guest.  He has had 21 surgeries.  He recently lost his wife after 63 years of marriage.   What a journey Pearly has had.

Pearly and the Ponder Brothers took different paths.  We had thousands of employees and Pearly had his daughter running the kitchen for 40 years.

There is no perfect route to success.  I admire the path that Pearly took.  He admires the direction my brother and I chose to take.  Wildly different, we respect each other and honor the success each of us has enjoyed.

Years after our paths last crossed, I happened to have the opportunity to visit my old friend.    Our friendship was a blessing in the past and is a renewed blessing now.  I am happy after all these years to get the chance visit the Pearly Gates one more time.