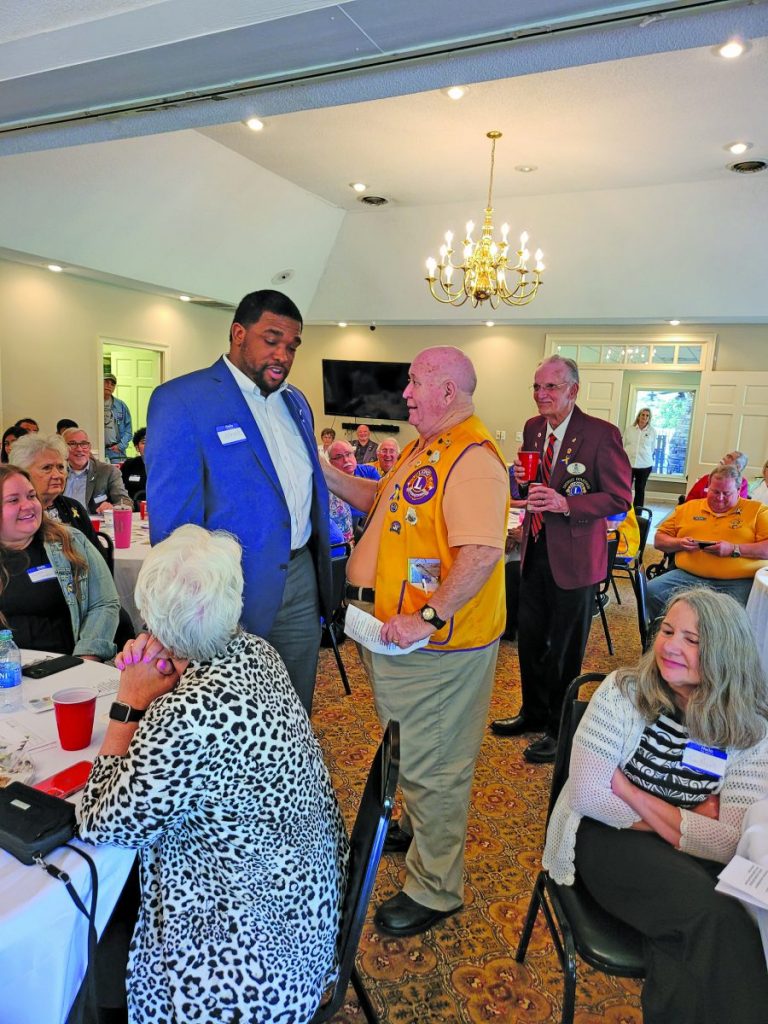 Johnelle Simpson II was the keynote speaker at Lions of Georgia District 18-O Convention on Saturday, April 22. He and his wife, Rachelle Simpson, were introduced following lunch. Johnelle was a member of the Seminole County LEO Club while in high school, and it was co-sponsored by the Seminole Lions Club and Donalsonville Lions Club. Johnelle is a community point of pride and has been since high school.

In 2010 the Seminole Leo Club attended the Georgia Leo Gathering and Conference at the Georgia Lions Camp for the Blind. This is an annual weekend filled with learning Leadership, Opportunity, and Experience skills (the LEO acronym/motto) through service projects, parliamentary procedure training, officer training, and fellowship. The event was attended by 135 Leo Club members from around the state of Georgia. At that event Johnelle was elected State Leo Vice-president by his peers. In a superlative election he was honored with the “Future President of the U.S.” award. On June 11, 2011 Johnelle was installed as the State Leo President by Lions of Georgia Council Chair Grace Clower. She asked him what his goals were for his term of office. Johnelle’s response was “I will work to get better participation from clubs in all Districts, especially in service to those in need.” He then immediately started organizing and galvanizing the officers and committees to plan activities and service projects for his term of office.

Johnelle has not stopped impressing his peers, Leos, and Lions leaders. After graduation from Seminole County High School in 2012, he attended UGA studying Risk Management & Insurance and Political Science and was President of the Student Government Association.  He graduated from law school at University of Tennessee College of Law, and is now an attorney with Fortson, Bentley and Griffin, P.A. in Athens, Georgia. He was featured in the Athens Magazine by the Chamber of Commerce and honored as one of 2022 Game Changers in February.

On Saturday, he spoke of his years as a Leo, his life in Seminole County, and his aspirations to be a good leader. He inspired the crowd of Lions with his play on words, his spirit of giving and striving to succeed, and what it takes to work with compassion for others. He loves music and cooking and used those passions to inspire the attendees at the convention. He shared his passion for purpose and pursuing opportunities in a positive manner. Johnelle shared his three Keys of Success: keep a positive attitude, embrace challenges,  and remember – at the end of the day – it’s all up to you. His wit and humor, respect of other organizations was shared in storytelling fashion. He encouraged us to continue to pursue greatness using lines from songs like “I believe I can fly!” and quoted his motto “The road to success is not straight; there are curves called failures, loops called confusion, speed bumps called friends, and there are caution lights called family. There are flats called jobs, but if you have a spare called determination, insurance called perseverance, a driver called Jesus, you can reach a point called success.”

Brenda Arnold, State Leo Chair, introduced Johnelle, giving some of his background story, and two Lions dignitaries provided the response following his speech. Past International Director Lion Kembra Smith spoke of her fond memory of Johnelle as a Leo, his leadership abilities while in high school, and his love and eagerness to work for the Camp for the Blind. Current Lions International Director from Paducah, KY Supreme Court Justice Christopher Shea Nikell followed by asking to borrow or steal some of Johnelle’s words of wisdom and inspiration. He commended Johnelle for being able to teach something new to those of us who have been Lions in service for many years. At the end of his response there was a standing ovation thanking Johnelle for his accomplishments.