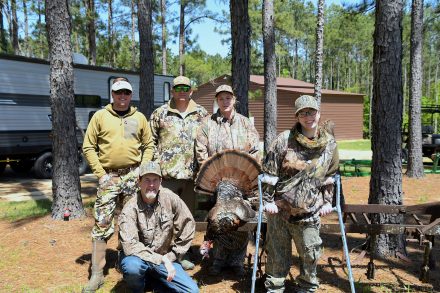 Kalee Long poses with her gobbler she bagged last Saturday. Long was also given a new track chair at this year’s B4B dinner.

As Spring settles in, turkey season arrives yet again, with gobbles ringing through the forest as toms strut their stuff for hens. This also means it is time for Beards for Benefits. Founded by Klay “Pudoo” Armstrong, the yearly event is aimed at pairing disabled children with veterans together for turkey hunts.

This year, the festivities were split, with the main banquet and auction fundraiser held two weeks prior, while the main hunts took place this past weekend. According to Armstrong, this change had been requested, as some of the children did not wish to be made the center of attention at the main banquet, and he and the B4B board felt the banquet’s focus had been more on raising money, and less on the kids and vets. He previously stated that, based off feedback, this may be how B4B operates going forward.

As of Saturday, April 9, the result was in. “I think splitting this up is the best thing we’ve ever done,” Armstrong said, “It takes the attention off of everybody and puts attention on the kids and vets.”

There was still a dinner held the Friday evening before the hunts, however only for the kids, vets, families, guides and landowners. Auctions and raffles were held, although they were much smaller than the one held two weeks prior. The kids were treated to a Hibachi dinner, and two were given gifts for their disability: Kalee Long was given a new track chair, while Guthrie Milton received repairs for his wheelchair. In addition, Gavin Gaylord received a $4,000 scholarship that B4B is now offering.

B4B also presented a custom-made sign for Camo Dreams to its founder, David Fussell, at the dinner; Camo Dreams is another charitable organization that organizes hunting trips for children with disabilities, and helped B4B find kids to help when the charity first began.

B4B makes arrangements with landowners willing to allow hunters on their property, with some as far away as Abbeville, Ala. Multiple turkeys were bagged over the weekend, by both kids and vets alike.

“I want to thank everybody,” Armstrong said. “Thank the community, thank the landowners, thank our kids and God bless our vets, and don’t forget about our volunteers.” He did reiterate the importance of community support for B4B, saying, “We appreciate the support, and continue to support us. We don’t get paid, we don’t want to get paid. But, we can’t make money to buy these chairs if we don’t get support from the community.”

Article was written by Ethan Reddish and reprinted from The Post-Searchlight.