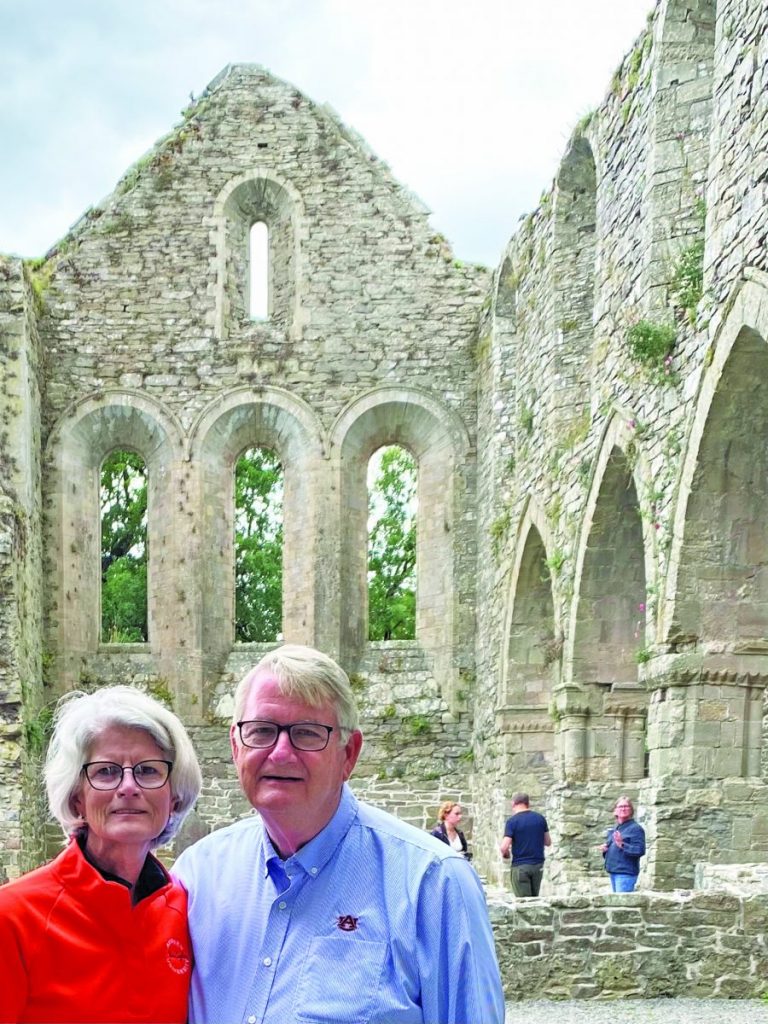 Back in my long-distance backpacking days, I received one of the pieces of traveling advice from a very experienced outdoorsman.  He told me to travel long enough to begin to feel the culture, the essence if you will, of your destination.  Mary Lou and I began to understand and truly get a feel of Ireland during the second week of our travels.

Some of our newly acquired habits and tastes include a growing fondness for their bacon.  This is not the crispy strips of fat and lean that Americans are used to, but more like a country ham without so much salt.  It is often cooked as long as seven hours and I found myself having it with every breakfast.

While I may never have a great fondness for Guinness Stout, I did come to appreciate Irish Whiskey.  A tour of the distillery that produces Jameson Irish Whiskey, along with many other brands, helped me not only appreciate the taste, but the process which results in such a smooth libation.

Scones are more like our southern biscuits than the scones we often see in our bakeries in the United States.  They can be a mid-morning or mid-afternoon snack, and are combined with Irish butter, jam and a clotted cream, the more cream the better.  It would never replace a Hardee’s biscuit with Mayhaw Jelly at the top of my list, but it does come in a respectable second.

Our food has been outstanding for the entire trip, though I am quite sure that the average Irishman does not eat quite like we have during our journey.   No amount of exercise could overcome the cumulative effect of so many calories day after day, but then it is a vacation after all.

This beautiful land of rolling hills and ancient history continued to delight right up to our last day.   Even as I write this article from a plane somewhere over the Atlantic Ocean, I think back to the random abandoned castles, churches and abbeys that dotted the landscape everywhere we seemed to go.

In particular, our stop at the Jerpoint Abbey was a memorable visit.  Constructed in the 12th century, the Abbey is one of the best examples of the transition from Romanesque to Gothic architecture.  Its tower dates to the 15th century.   Some of the tombs within its walls contain the remains of 13th century knights, buried more than two centuries before America was even discovered.  The monastery was forced to close in 1541 when King Henry VIII dissolved all the monasteries in Ireland.

While we studied how Ireland lived hundreds of years ago, we also visited a working dairy farm and a working sheep farm.  Most farmers are generational, often learning their craft from their fathers and grandfathers before them.  Of particular interest was seeing a demonstration of how the sheep dogs herded the sheep on the mountainous and often rocky terrain.

It is hard to leave Ireland without an appreciation of its natural beauty.  Almost any travel brochure of Ireland would show the Cliffs of Moher.  The sheer vertical cliffs on the western coast of Ireland truly defy description.  Their scale is so big and the views so dramatic that none of my many photographs truly captured the majesty of this place.

We were blessed during our visit to have almost perfect weather.  While we wore jackets every day for two weeks, we had almost perfect visibility for every day but one.   A visitor to the Cliffs of Moher only has a fifty percent chance of seeing the cliffs clearly from the viewing points high above the ocean.  The perfect day, though very windy, resulted in views that will remain in my memory forever.

Other items of note during our second week include Killarney National Park, a 26 thousand acre preserve within the city of Killarney that does not allow automobiles.  You can walk, bike, or catch a carriage ride, but you cannot drive.  Imagine how that might work in America.

The Ring of Kerry was a drive along the coastline and mountains that took you to incredible vistas in very remote parts of the country.  So remote, in fact, that some houses did not have electricity until the 1980s.

The final impression was one of the best.  The people of Ireland were universally friendly to us and seemed proud to show their homeland off to Americans.  We were particularly impressed with the pride that small villages took in the appearance of their towns.   Several times we witnessed volunteers picking up trash, mowing public spaces, and assisting visitors.  Volunteers, all wearing a brightly colored mesh jacket, working to make their hometown be the best that it could be.   Pretty amazing to see and a lesson I wish we could all take to heart.

At the end of the trip, Mary Lou and I felt like this ranked up there with some of the best trips we have ever taken.  In addition to the history and beauty, we enjoyed getting to know eight other couples besides our longtime traveling friends.  Our new friendships made our trip even better and will help us to always remember the Emerald Isle.