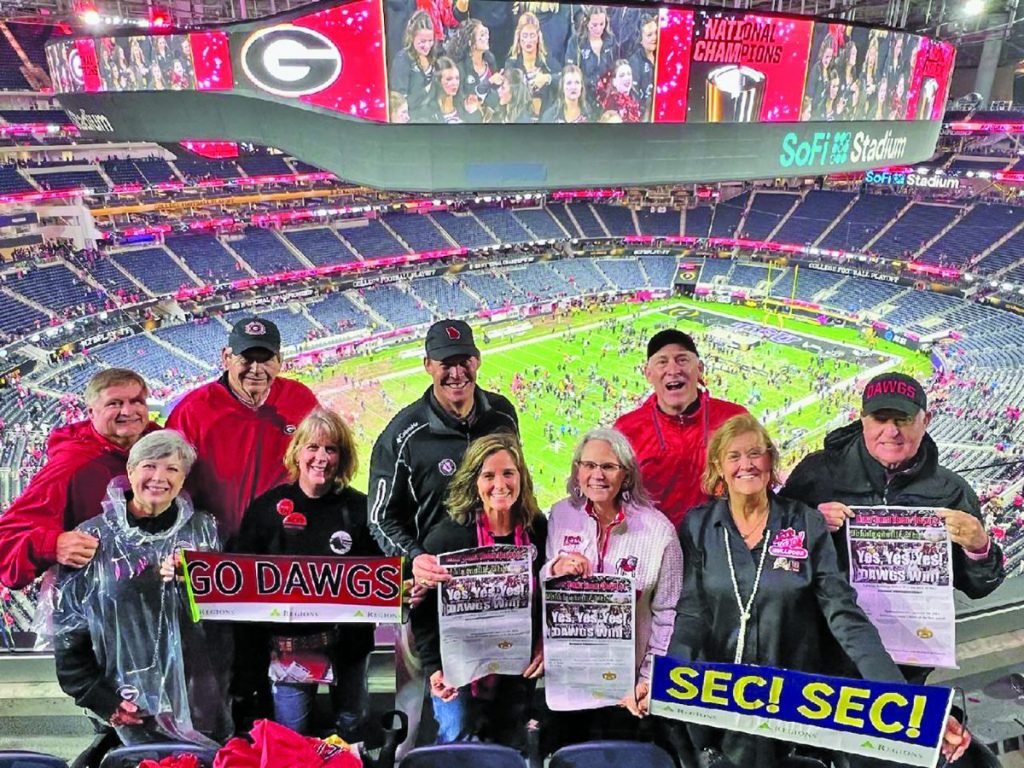 PICTURED ABOVE ARE Ed and Ellen King, Ernest and Karen Ponder, Alex and Nancy Jernigan, Wayne and Becky Worsham and Sheryl and Royce Cannington celebrate the Georgia Bulldogs’ 65-7 victory over the TCU Horned Frogs at So Fi Stadium in Los Angeles last Monday evening.

For the second year in a row a Donalsonville News special delivery was made last Monday night to So Fi Stadium in Los Angeles, California for the college football national championship game between the Georgia Bulldogs and the Texas Christian University (TCU) Horned Frogs.

For multiple reasons the newspaper’s editor David Maxwell, a Red and Black bleeding University of Georgia School of Journalism graduate, could not make it to the game, so as far as he was concerned, he did the next best thing. “I could not make it to Los Angeles,” commented Maxwell, “so, just like I did last season before the championship victory over Alabama, I poured what I hoped to be some good luck mojo into a front-page design with a graphic message and statement of my hopes and dreams for the Bulldogs to accomplish on that night.”

To avoid any chance of putting a jinx on the Dogs’ chances in the game, Maxwell shared his project with only his special, special delivery mailmen and women, Seminole County die-hard Georgia fans Becky and Wayne Worsham, pictured above at So-Fi Stadium with fellow Red and Black-bleeding current and former Seminole County fans Sheryl and Royce Cannington, Ed and Ellen King, Nancy and Alex Jernigan and Karen and Ernest Ponder.

Well, as we all know, the game went Georgia’s way and the Bulldogs aggressively defeated TCU 65-7 for the 2022 College Football National Championship.

So, to themultiple MVP mailman on the field, Stetson Bennett, IV, and his teammates and coaches, and to the mailmen and women who made the special game day front-page delivery, thank all of you for your part in helping to put a priority on making this an extra special victory for every barking Dog in the entire Bulldog Nation.