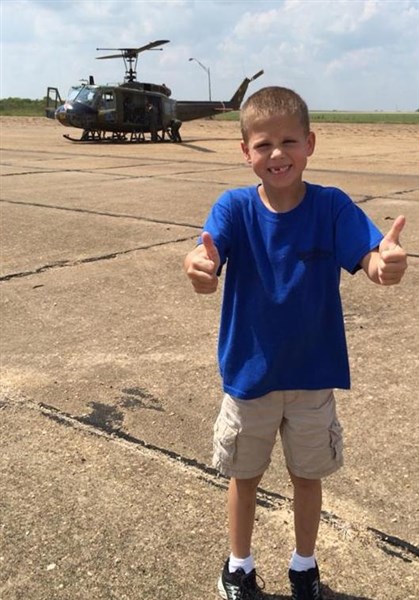 You could hear them coming before you saw them.   The first was a big Huey-1H helicopter.  The second was a sleek, black AH-1F Cobra attack helicopter.   Mary Lou and I, along with our grandson Henry, were about to take a ride that put the rollercoasters at Disney to shame.
The Friends of Army Aviation-Ozark and the Army Heritage Foundation and Flying Museum in Hampton, Georgia teamed up to offer rides to the public last Saturday at the Dothan Regional Airport.   The rides were offered to the public as a way of educating people about Army aviation and the historical role that Fort Rucker has played in these aircraft.
The rides were offered by volunteers, mostly veterans, who have both a love and a respect for these amazing machines.  The Huey that we rode in was in use in Vietnam from 1969 until 1971.   The cost of the rides helps offset the maintenance and upkeep of the two copters.   The Huey costs approximately $800 per hour to fly, while the one-passenger Cobra costs $1,100 to operate.
The Huey seats 10, with two of those facing out each side, with the door open.  While the day was brutally hot, the air instantly cooled as the big chopper revved up its engines and took off without warning.
It was a bit more intimidating that I imagined as it became apparent that we weren’t just on a leisurely cruise above the neighborhoods and fields; rather it seemed the pilot was out to show us everything the machine could do in just eight minutes.
We swooped and swooned, banking left so hard that the only thing between Henry and me and the ground far below was our seatbelts.  I glanced over and saw the back of the pilot’s helmet which appropriately said, “Stop screaming!  I am scared too.”
About this time, I felt Henry grab my leg and saw him reach over and hold on to an adjacent metal brace.  What he didn’t know was that I had already grabbed hold of that same brace, just in case my seatbelt malfunctioned.
We weren’t sitting with Mary Lou, who had managed a seat in the middle, but based on decades of marriage and knowing that she doesn’t ride any rollercoaster whatsoever, I expect her adrenaline was pumping even faster than ours.
I just missed Vietnam, graduating from high school the year after this particular Huey was brought back to the United States.  However, I could only think about with renewed appreciation those soldiers that flew and fought from these machines.  For them, it wasn’t a pleasure ride, it was war.
As we landed, all three of us grinning from ear to ear, I asked Henry which was scarier, jumping off the high dive or riding in the helicopter.  “Riding in a helicopter”, he said without hesitation.  “That was the most scared I have ever been”.  Me too.
o0o
Dan Ponder can be reached at dan@ponderenterprises.net