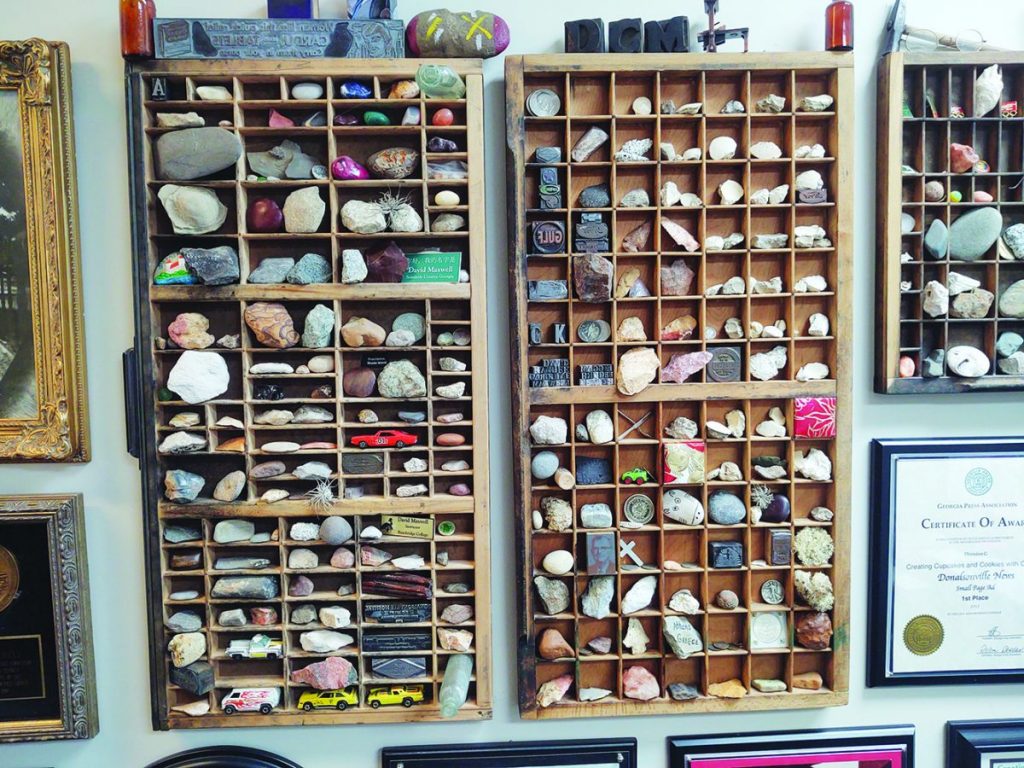 I love everything about rocks and have been collecting and studying them for almost my entire life. Ever since I was a little boy I’ve been fascinated with anything to do with a rock, and I think I started collecting them even before I knew I was collecting them. When I was seven years old on vacation in the North Carolina Mountains with my parents, a Cherokee Indian gave me a rock he had polished, and I guess that’s where it all began. Once my children were born, I justified my obsession with the idea that I was putting together a prize-winning science project for them one day. Well, both of my girls are now out of college and neither one ever used the collection for a science grade.  So, I guess it has been, is and always will be just my obsession

From big to small rocks to fantastic fossils, I can’t stop picking them up and I usually find a nice specimen wherever I go. Rocks are everywhere in my house and even once in awhile in the washing machine (got to remember to empty my pockets out). Every rock or fossil tells a story and I love to read them.

Like a snowflake, no two rocks are alike. I’ve always had a fascination for all the different shapes, sizes, colors and especially the marks, nicks, and scrapes found on them that tell a story and give a clue as to the history of that rock. Rocks are cool.

Everywhere I go my head is down and my eyes are scanning for anything that catches my attention. My friends and family are even getting in on the action. Quite often when someone goes out of town or to a far away place, I ask them to bring me a rock back, and they do.

In my life rocks are everywhere, telling a story of where I have been and places I would like to visit someday. I have rocks in lots and lots of storage boxes, shadow boxes, baskets, cups on my counters (soaking), outside in buckets waiting to be inspected and displayed on my furniture. I love looking for fossils, crystals, and just out of the ordinary looking rocks. Each rock I find or receive is unique and each one often brings me into recognition of what I don’t know. It’s a reality check!

I collect rocks from places I visit or want to remember …. they aren’t necessarily pretty, but often are widely seen in the area (pieces of shale from a shale covered site, white quartz from a mountainous area covered with it, etc.). I love to have the more interesting pieces setting around in clear view and they even cover my desk at work. I also have rocks in my truck.

Since my obsession has gone viral and friends pick up a rock for me from their trips, I have rocks from places I may never be able to see.

I have rocks from 41 of the fifty states, petrified wood from Alabama and Arkansas, a great specimen from President LBJ’s Ranch in Texas, and a ton of kettle rocks from the Great Lakes.

I have rocks from 49 countries  including fine specimens from Cozumel, Mexico, Belize, Peru, Chili, Brazil, Turkey, Syria, an archeological dig in Acre, Israel, from the headwaters of the Nile River, Scotland, England, Wales, Germany, Russia, China, New Zealand, Australia, Spain, Austria, and I even have a piece of the Great Wall of China. And, I have two prime specimens from outer space, or that’s what I was told by the alien who gave them to me.

On the wall of my office, displayed in antique Donalsonville News lead type drawers, and placed throughout my house, you will find my life of rocks. My children have accepted this condition of mine and are now contributing to my habit.  For Christmas, Caroline gave me two arrow heads from Coastal Georgia and a decorative rock stress-calming fountain – I definitely needed that.

One day, before I get too old and forget about it, I would like to acquire a rock from the southern tip of Italy and from the lost Gardens of Heligan in the United Kingdom  – I want to pick up these rocks personally. It took millions of years for some of these rocks to form; hopefully it will take less time for me to find the rocks of my dreams.

What I like about rocks is their character … they are weathered by time, yet can endure for centuries …. in a sense, when I hold a rock I am holding a little piece of time. Who knows what all that rock has experienced? Some people may think I have rocks in my head, but I don’t.

I just have them everywhere else. I love my rock(y) world.

Comments and impressions are welcomed and

See you at Saturday’s Rejoice Run and the Harvest Festival!

Ready to embrace the arrival of the Autumnal Equinox

Fall is my favorite time of year. What’s yours?