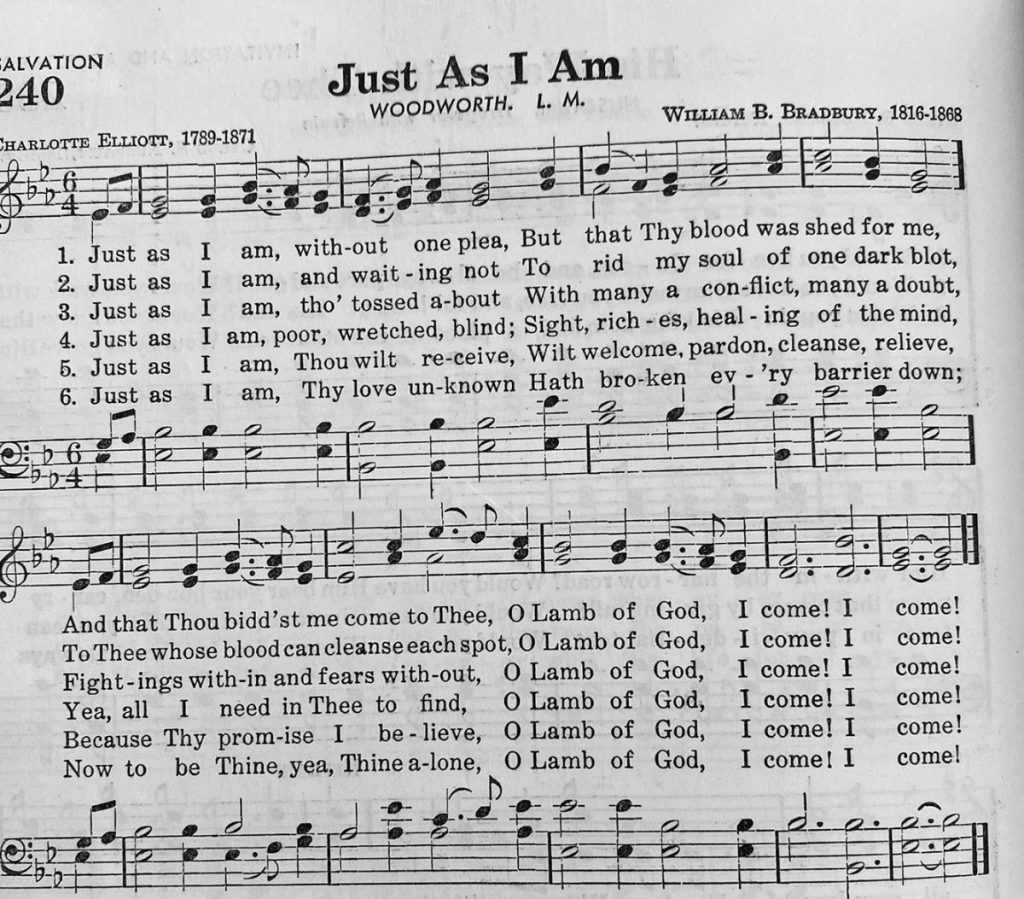 Some two years after moving to Auburn, Mary Lou and I are still emptying boxes, cleaning off shelves and putting up pictures.  My new office looks great with mementos of our past all over the walls.

The music is neatly lined up, though there are still multiple boxes to go through.  The walls are full, but we realize there is still more to do.  We discovered my office has plaster walls, perhaps common for a house built in 1935.  It makes it a bit hard to hang pictures when the plaster wants to crumble when a nail is hammered into the wall.

In the course of the long day, I came across my collection of hymnals.  They span a century and, more importantly, tell the story of my own love for music.  There are at least 13 hymnals on the shelves, with several more likely in still unopened boxes.

I started taking piano lessons when I was seven.  I practiced on my Grandmother Catharine’s piano in her living room that was never used.  It was somewhat of a challenge.  After all, what boy in rural Alabama wanted to take piano lessons in the early 1960s?

At some point, my Great-Grandmother Beall gave us her Cabinet Grand piano.  My recollection is I was seven years old, almost eight.  She was given the piano when she turned seven, three generations earlier.  I always felt a special bond with her because of that gift.

Nevertheless, music lessons were tough.  I cannot say I loved it.  The children’s songs were, well, child-like.   They were the equivalent of learning to read, “See Spot Run”.  I was not connected.  I was not getting it.  I wanted to play football in the backyard.

At some point, my piano teacher, Carol Boyd Terrell, introduced me to the Baptist Hymnal.  She was the preacher’s wife, and I was in the third grade.  With two services on Sunday, Sunday School, Training Union, and Wednesday evening services, I probably knew how to sing over half the songs in the hymnal by heart.

Playing hymns changed my whole attitude.  I knew the music, the words, the tempo.  I could play something people wanted to sing.  Not children’s melodies, but adult songs sung every Sunday.   I was no prodigy, but I began to play with enthusiasm, and still played football in the back yard.

Before long, I was playing the organ on Sunday night.  It was a Hammond Organ, and I began with the most basic settings.  There was a piano playing opposite me, so it was not like I was having to lead the entire service.

My high school piano teacher, Mrs. Smith, was the organist of the First Methodist Church in Dothan.  She drilled classical music into my head but understood my love of more traditional music.   She did not teach me to play the organ, but she gave me all the tools.

Years later, I would begin playing the organ at the First Presbyterian Church of Donalsonville.   I served there for over 35 years, including scores of weddings and even more funerals.  It would have never happened if I had not discovered the Baptist Hymnal, and the church’s secondary choice, the Broadman Hymnal.

Flipping through the pages of all these hymnals is like reading through old diaries.  The Broadman Hymnal has my grandmother’s name inside the cover.  I can remember her soprano voice singing certain songs.  Her name is also in the “Old Fashioned Revival Hour Songbook”.

One Summer in high school, I played the organ for a Lutheran church, their hymnal still sitting on my shelf.   The organ was in the choir loft which was in the rear of the church.  I was sitting backwards having to watch everything in a mirror.  It was the only time I got dizzy while playing the organ.

The “Songs of Faith” belonged to my Great Grandmother.  It was from the Brantley Baptist Church.  She passed away almost 55 years ago, but her love of music remains with me.

To this day, I can remember the song “Just as I Am” was on page 240 in the old Baptist Hymnal.  I recall playing “Victory in Jesus” almost every Sunday evening at the Presbyterian Church when the children got to shout out their favorite hymns.

I still get chills when I hear the descant for “Holy, Holy, Holy”, which was the first song in the Presbyterian Hymnal.  Martha Nell Spooner, now in her nineties, brought tears to our eyes as her voice soared during the last verse.

Having been a Baptist, Presbyterian, and Methodist, I find comfort in how much the music intertwines between denominations.  Even as praise music has found its way into the mainstream church, we still all have more in common than not.  Seems to me, we all worship the same God.

When I worry that the chaos in the world is insurmountable, I think back to my earliest days in church.  Find an old Baptist Hymnal and turn to page 240.  Just as I am.  It is all you need to know.

Oh, to be young again

Give my regards to Broadway

May the best rival win

To do or not to do