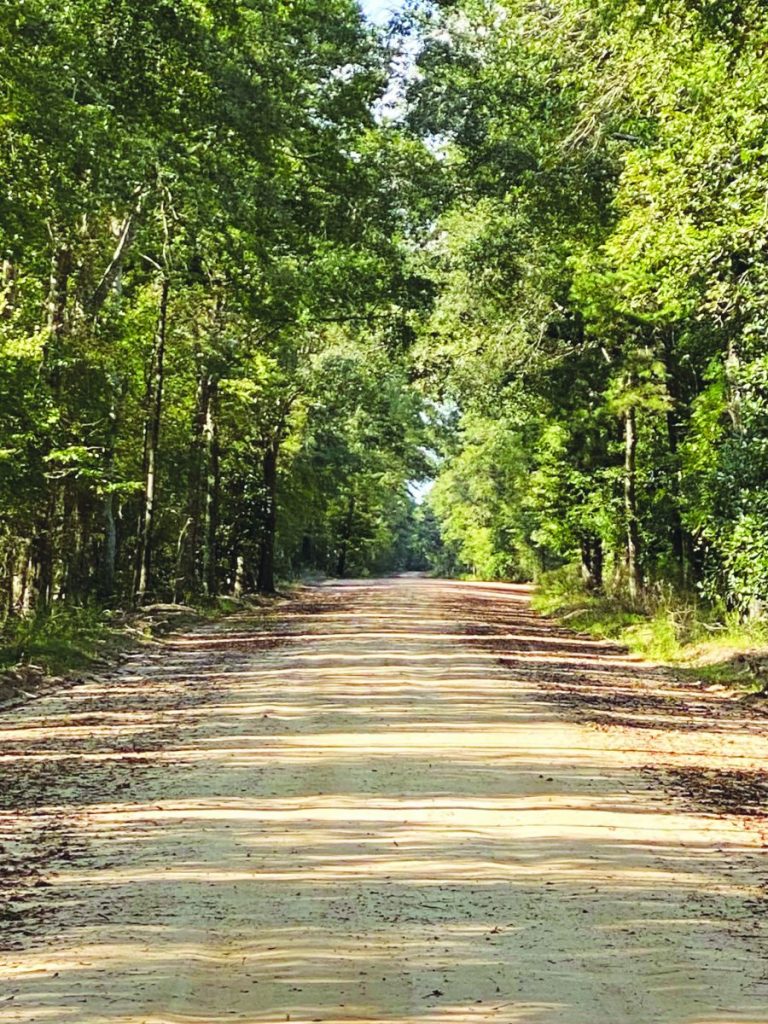 The hot mineral springs were discovered when the Sealy brothers were drilling for oil in the 1920s just below Cottonwood, Alabama, my boyhood home.  They did not find oil, but they did find something of tremendous value, at least for the time.  The hot mineral springs that flowed out of the ground at 110 degrees resulted in a fine resort with a motel, dining room, massage and therapy pools and a hot and cold pool.

Today, even the ruins are barely visible from the road.  A fire several years ago destroyed most of what was left of the buildings.  Now the property is hidden by a generation of growth by brush, weeds, and volunteer trees.  I have great memories of the Sealy Springs of my youth and still drive by occasionally when I am in town.

This past week, I drove a bit past the old resort and kept going when the pavement ended.   The dirt road is in good shape, especially considering that it comes to a dead end just over two miles later, at the Florida – Alabama state line.

This road has a lot of memories for anyone that grew up in the small town.   It is where I watched my father gigging frogs in the swampy waters along the road in the middle of the night.  It is the road where I first hiked at night with my scouting buddies.

The road had a wooden one-lane bridge that seemed rickety if you were just crossing it with a bicycle.  The three big culverts that later replaced the bridge just do not have the same feel.  I could imagine Opie Taylor walking across this bridge with a cane pole on his shoulder.

To my knowledge, there was never a house on the road, though several cultivatable fields were accessed by this route, which probably explains why it was maintained all these many years.

At the end of the road was a field where I shot my first dove with the new shotgun my Dad gave me for my 12th birthday.   I can still remember that I only winged the bird and had to wring his neck.  Today, there is no field, just 50 years of unmanaged timber growth.

This road is where a lot of “firsts” happened to boys growing up in rural Alabama.  It is where many learned to do donuts with their newly acquired trucks.  It is where teens gathered for unauthorized gatherings at the end of a road with absolutely no lights.  Some other firsts are probably best left unmentioned.

Yet, 55 years after I shot that first dove, I still love traveling down that dead end dirt road.  It reminds me of good times with great friends.  We were oblivious to the challenges we would soon face in the world as adults.

Sadly, litter finds its way along this stretch.  Not the roadside trash of people throwing away fast food bags and Coke cans, but the dumping of couches, refrigerators and sometimes just bags of trash.  All were left by people too lazy to take something to the dump or leave by the curb.  I cannot really think of any good things to say about people like that.

But despite the trash, it remains a special place.  I stopped several times and got out of my car.  I listened to the birds and noticed the absence of any manmade sounds.  I particularly marveled at the long canopies of trees that would go for long stretches over the road.  Quite beautiful and peaceful.

Since I left Cottonwood to attend college and then moved to Georgia, I have randomly returned to the town that raised me.  Even more infrequently, I find myself driving on this dead-end dirt road.  It never has failed to take me directly back to the great memories of my youth.  It is not a road to nowhere.  This is a road leading directly to my past.