This past week my wife and I enjoyed the Lantern Tour at Pine Hills Cemetery, Auburn’s oldest burial ground.  Pine Hills holds the remains of many of Auburn’s earliest settlers, including its founder Judge Harper.   In fact, Judge Harper’s son, William, is the oldest marker in the cemetery.  The younger Harper died in 1838 or 22 years before the beginning of the Civil War.

The tour was delightful.  Over 1,500 electronic candles lined the pathways.  It was a beautiful Fall evening, with the rising moon and dropping temperatures making the night perfect for the event.  The small groups of 20 or so stopped at 13 different locations.  At each stop we were treated to interesting facts about different people buried in the cemetery.  The actors and actresses were dressed in period costumes or dress that otherwise reflected the character they were portraying.

It was like a living history lesson, interspersed with fun facts, sobering details, and perhaps a bit of historical fiction.   The names of people I have heard since I first came to Auburn as a child were mentioned.  Other names were new to me but held big parts in the history of the city.

In church just two days later, I learned that according to NPR the most common word used in obituaries is “help”.  People want to be remembered by what they have done to help others during their lifetime.  It can be as simple as they were a good wife and mother.  It can be more complex as evidenced by some of the stories we heard on the lantern tour.

Mary Lou and I have spent countless hours in cemeteries around the south doing genealogical research about our common ancestors.  I could not help but think how a tour as well done as the one at Pine Hill might play out in our hometowns of Cottonwood, Dothan, and Donalsonville.  What a great way to showcase your community and honor some of your ancestors.

Whether anyone mentioned on the tour would be happy about the portrayal of their life decades and even a century and a half later will never be known.  The last word we as the living have are the words carved on our tombstone, our epitaph.  That is assuming that our descendants follow our wishes and accurately portray our life.

Some of the more common phrases found etched in the stone include “gone but not forgotten”, “rest in peace”, “always in our hearts”, and “till we meet again”.  There is no shortage of phrases that attempt to capture the love of the departed and the grief of the living.

Some people, however, choose to leave their last words in a different way.  Jesse James’ tombstone states that he was “murdered by a traitor whose name is not worthy to appear here”.  Mel Blanc, known as the man of 1,000 voices and the voice of Bugs Bunny, fittingly has the words “That’s all folks” just above his name.

Movie star Joan Hackett has a bit of fun by telling visitors to her grave “Go away.  I’m asleep”.  Robert Clay Allison had the words engraved on his marker “He never killed a man that did not need killing”.

Another favorite is one I saw while traveling a back road near Moultrie.  Out of the corner of my eye I thought I saw an elephant in the graveyard as I passed the Pleasant Grove Primitive Baptist Church in Colquitt County, Georgia.  This vision was so strong I turned around and went back to the cemetery.  Sure enough, a full-size elephant stood on the grave of William F. Duggan, Sr.

The elephant represents Nancy, an elephant owned by Duggan, who had just bought a circus prior to his death.   Duggan had worked with elephants in various circuses in his youth.  An unusual, but entirely fitting monument to Duggan’s life.

I have given some thought to what I might like on my own tombstone without reaching any firm conclusion.  As for my obituary, I hope the word help might find its way into the wording in some fashion.  Other than that, I hope some might simply state “He was a good man”.

Some say the most important mark in your obituary or on your tombstone is the dash between the year you were born and the year you died.  The words of our epitaph and obituary are written during our life, during the dash, if you will.  Who gets the last word?  Hopefully, we do but only by our own actions and deeds. 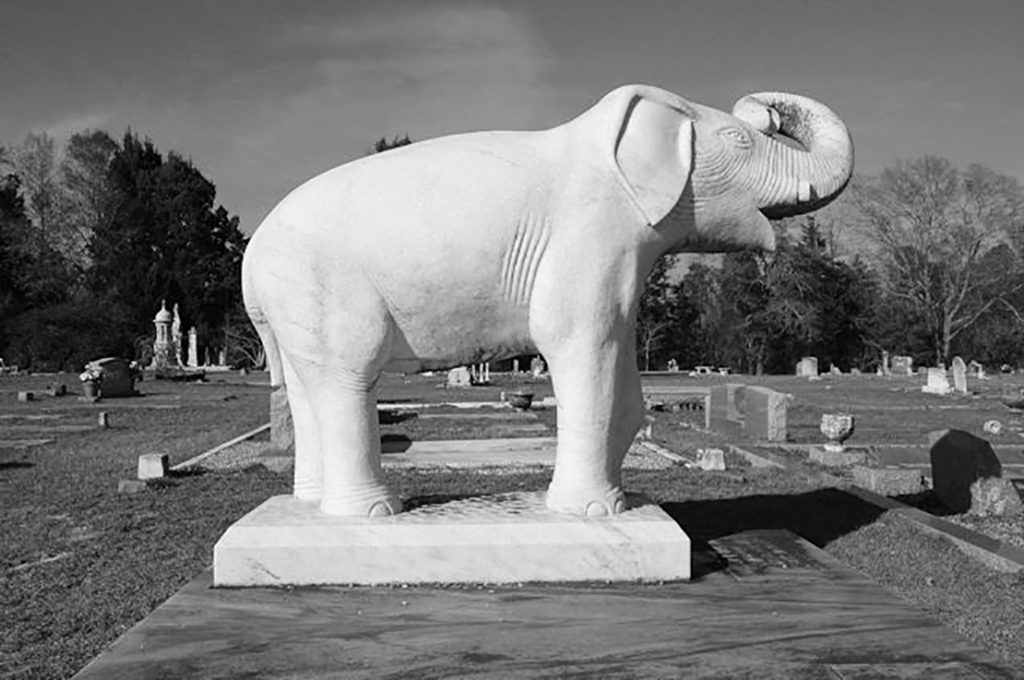 The best years of my life